A bad week for Big Oil... with worse to come?

The last week was quieter in the oil markets as far as prices were concerned and there was a steady drift upwards on the back of some economies partially reopening. It was, however, reporting week for the oil companies and their results showed just how badly each of them had been affected by the collapse in prices and the fall in demand since the beginning of the year (and this was just 1Q, we still have 2Q to come when we will see the impact of April’s price collapse). The outlook for demand – at least according to the IEA – is fairly bleak as set out in its latest Global Energy Review.

Companies
BP started last week’s reporting cycle with 1Q profit down by 66% and its 2020 capex cut from $15 bn to $12 bn – undoubtedly affecting output in the medium-term.  It did report that its target breakeven price was now $35/bbl rather than the $56/bbl of 2019.  It did, however, maintain its dividend – although that will be reviewed in 2Q.  Shell dominated the newsflow when, with 1Q profits down 45%, it cut its dividend for the first time in 75 years – cutting it by 67% to ready the company for a better balance between the short-term and the long-term development of the company.  67% has become a popular number – in April Equinor cut its dividend by the same amount (the first major to do so).

The US companies were broadly similar.  ConocoPhillips fell to a net loss of $1.7 bn in the first quarter and announced further production cuts this quarter but maintained its dividend.  ExxonMobil reported a loss of $610 mn against a profit of $2.4 bn a year earlier and cut its capex by $10 bn.  Only Chevron bucked the trend with strong downstream margins, asset sales and positive tax effects allowing the company to declare a first quarter profit of $3.6 bn, although the company still made further cuts to its capex programme which has now been cut by 30% this year.

Clearly times are tough for the majors.  The US companies seem to have a clear approach – save money now, proactively cut output, maintain the dividend and be ready to respond to a market recovery.  The European companies, too, have cut their capex but two of the three have also cut their dividends and are focusing on the energy transition in a way that the US companies do not yet appear to be.

Oil prices
“Quieter” is a relative term and as we didn’t have oil prices below zero since I last wrote about them that must be a good thing, right?  But early last week fears did resurface that the June WTI contract would fall into the same negative territory as the May contract had and as a result June prices fell by almost half before starting a recovery as traders grasped at the news that some parts of some economies were planning on reopening (a lot of somes and plans in there of course). 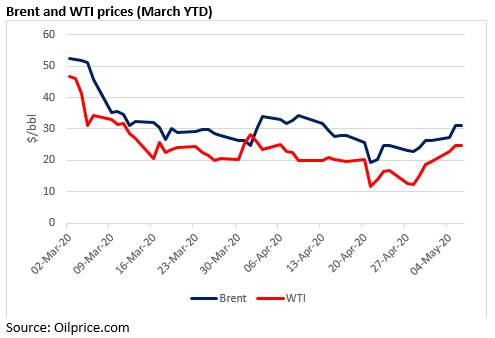 More data emerged during the week highlighting that oil prices were actually even weaker than the headlines suggested.  A lot of the prices discussed in the media are futures or forward prices, which can clearly get affected quite quickly by sentiment, storage levels and demand.  However, behind that is the physical market where real buyers take delivery of real oil and turn it into real things that people want…or not as we have seen recently.  Those prices generally track the market but have diverged quite a bit in recent weeks so owners of physical barrels – available for delivery in the back half of the next month and already in the shipping programme - are in an even more parlous position than the headline numbers would suggest given the widening discounts to the quoted benchmark.  I spent time as an oil trader in my younger days and one thing I learned was: when demand is falling, you don’t want to be the guy with the physical barrels.

These price moves all happened before the 1 May start date for the coordinated production cuts promised by OPEC and various other countries which aimed to remove 9.7 mbd of supply from the market and stabilize prices.  Apart from the stated reductions by OPEC (essentially Saudi, the UAE and Kuwait) and Russia, Norway announced that it was cutting production by 13% in June, which would reduce to a 7% cut through the second half of the year but also delay the startup of new fields so that overall output at the end of 2020 would be 300 kbd lower than otherwise planned.  While the US government has not formally committed to cut production, cuts are being made.  ConocoPhillips announced a cut of almost 500 kbd in June domestic production, Chevron will cut 400 kbd globally while ExxonMobil plans to cut investment and output in the Permian basin, only recently touted as the centre of Exxon’s growth strategy.

OPEC+
The oil price war – though short-lived – has had an immediate and obvious impact on the economies of two of the protagonists, Saudi Arabia and Russia.  Saudi’s net foreign assets fell by $27 bn in March, marking the fastest decline in twenty years.  We noted in an earlier blog that Saudi was aiming to transition away from its over-dependence on oil and gas but needed oil money to do that.  There is a lot less oil money around these days.  The government cut its budget by 5% to preserve cash but still ran a $9 bn deficit in 1Q and has talked about raising its debt ceiling.

Russia declined to participate in the original OPEC+ proposals in March, with the aim or pressuring one of its major competitors, US shale production.  It has since agreed to even bigger output cuts after the price war proved to be a bad idea for all concerned.  The central bank believes GDP will decline by 6% this year as a result of Covid-19 and the price of Russia’s main export commodity has fallen sharply, putting pressure on the government’s budget, which relies on oil and gas revenues for half its expenditure while the government’s rainy-day reserves are falling day-by-day.

Both main players in the price war now face tougher times than they anticipated.  Dealing with Covid-19 and its fallout was never going to be easy – dealing with it when finances are under significant strain is a lot harder.

Demand outlook
We know that the coronavirus has had an extremely significant impact on energy demand, with the IEA estimating that oil demand fell by 29% in April and could be down by 23% in 2Q overall - hence the need for the coordinated production cuts agreed (at the second attempt) by the OPEC+ grouping.  A week ago, the International Energy Agency published its Global Energy Review 2020.  It’s 52 pages long and accessible through this link.

It makes for sobering reading for anyone interested in the outlook for the world’s most important energy source (that’s still oil & gas in case you’re wondering).  Fossil fuels are predicted to take a huge hit this year – oil demand down by 9%, gas by 5% and coal by 8%.  Solar and wind are likely to grow by 15% and 10% respectively while even the old standby of nuclear energy is expected to decline by 2%.  All this in the context of an overall decline in total energy demand of 6% against the 2019 figure. 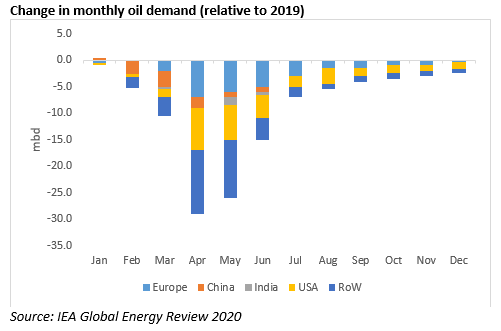 There are now those arguing that we are past ‘peak oil’, the year in which the world consumes the most oil it will ever consume and that the only way is down.  Others argue that transport and other demand will pick up once the worst effects of the pandemic are past and economies begin to pick up speed, citing China as an example of a likely course out of the pandemic.

The ‘post peak oil’ proponents have in my view more logic on their side.  Oil demand has been rising at relatively low rates in recent years despite reasonable economic growth and the day when the marginal unit of energy consumed is no longer a fossil fuel one but a renewable one is creeping ever closer.

Going back full circle to the very beginning of this note, that’s reflected in the fact that oil company earnings are under pressure, they are no longer the darlings of the stock market that they once were and that their role as payers of high dividends to people like me (i.e. investors and/or ex-BP employees) may no longer be sustainable.  The challenge for those oil companies facing this future – all of them, even though some appear reluctant to embrace it publicly - is how to adapt to, take part in and benefit from the energy transition.