Last Monday we warned that oil prices could turn negative.  That evening they did just that, with the main US domestic grade WTI trading as low as -$40/bbl for the May contract (sellers were paying buyers to take the oil).  There were very specific circumstances surrounding that price move: the May contract was expiring that night, there were 109 mn barrels of outstanding oil futures and just 20 mn barrels of spare capacity at the contractual delivery hub of Cushing.  Something, technically, had to give…and it was the price.  Now that’s passed, we look to the future. 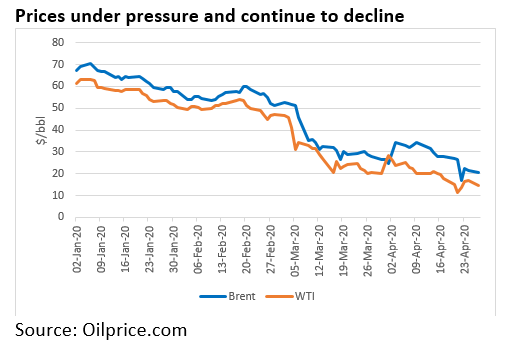 “Back to the future”.  Our view is that if there isn’t a clear and credible plan in place to rapidly and effectively reduce the mismatch between supply and demand before the expiry of the June contract, it is quite possible that we will see another collapse in the price of WTI when that contract expires.  Many oil ETFs – hammered in the May price collapse – have switched their positions to the June (and July) contracts.  Another price collapse at the expiry of the June contract would be more serious since it would demonstrate that, in the face of the evidence that the mismatch caused last week’s market disruption, the market and its participants have been unable to agree on what to do to prevent it happening again.

Cushing Oklahoma is an unusual place.  It’s not that big a town.  It has less than 8,000 people, a few fast-food restaurants and the Best Western is the fanciest digs in town by all accounts.  It is, however, the site of a large tank farm – which was expanded around five years ago – and it’s also the delivery point for West Texas Intermediate crude, the most traded US crude oil grade (most of it through the futures market).  While there are more than a dozen pipelines in and out of the town, moving oil to other parts of the country from Cushing is relatively difficult, so it’s effectively a landlocked terminal.

Today June WTI is trading 13% lower than Friday at $14.66/bbl, while the main international grade of Brent is just 2% lower at $20.94, reflecting the fact that there are many more delivery options for Brent than for WTI.

We said last week that the OPEC+ production cuts of 9.7 mbd were nowhere near large enough to offset the estimated 25-30 mbd fall in demand because of the coronavirus.  They are too small and they are too late – at the time of the WTI price collapse last week the OPEC+ cuts had not even come into force (and still have not, even today).  A few days ago, the head of the International Energy Agency Fatih Birol said that the cuts should be made larger and brought forward.  There have been press reports of a meeting by telephone between the OPEC members but nothing appears to have changed in terms of the size or the implementation date of the planned output cuts.

There were suggestions that OPEC wanted the US shale producers to join the cuts in an effort to prop up prices.  Leaving aside that regulatory and anti-trust statutes may well not allow that, it seems certain that US oil output will in any event decline over the next few years.  Output in 2008 was just 6.5 mbd – but by 2019 it had doubled to 13 mbd.  Capex was $130 bn last year, but this year it has been cut by more than 40% to just $77 bn.  The consultants Wood Mackenzie are now forecasting US output of 11-12 mbd while Energy Intelligence predicts just 10.8 mbd this year.  The US EIA is forecasting output of 11 mbd next year.  Some of the shale producers – who obviously have an axe to grind – have predicted output as low as 7 mbd if prices stay at $10/bbl.  There have also been predictions that by 3Q20, the US will have reverted to its historic role as an oil importing nation.

What of the announced output cuts?  In our view a 9.7 mbd cut when demand is down 25-30 mbd isn’t going to, well, cut it.  It’s simply not large enough to take sufficient barrels off the market and the 20 mbd cut that was talked about at the OPEC+ meeting relied on 10 mbd coming from countries that were not even at the meeting.  Certainly some of that 10 mbd will come from the US, with some of the shale producers taking the brunt of the output declines as they face shutting-in their production in the absence of financing from banks, many of which have become less supportive of the industry.  Canada and Kazakhstan will also see declines, as may the North Sea.

But compliance with the terms of the agreement to cut 9.7 mbd is no longer optional for OPEC and its fellow travelers.  Compliance with previous OPEC agreements has typically been poor and that has clearly undermined the effectiveness of those agreements.  OPEC+ really cannot allow that to happen this time.  However, we think that it may well happen unless the price pressure remains on.  Saudi Arabia, the UAE and Kuwait appear on board to make and maintain the cuts that they promised.  Iraq is already showing signs of a reluctance to cut output as it agreed to while Russia has made only limited cuts in the past so it must be questionable whether the larger cuts that it is being asked for in this new agreement will actually be delivered.  African producers also seem reluctant to step up as much as they had promised to in terms of output reductions.

However, given that world oil storage is rapidly filling up (albeit not as fast as WTI storage at Cushing did last week), floating storage is becoming scarce and loaded tankers are struggling to find homes, the market may actually tell OPEC that output cuts are no longer optional – there is simply not enough demand for their oil at any price and production will need to be cut since there is no more storage.

There is another OPEC+ meeting scheduled for 9 June.  That’s a lifetime away in the current oil market but our sense is that if the market remains awash with oil at the time of that meeting and further cuts are not implemented, prices are going to head down again.  By June of course we may see some early signs of rebounding demand as the various lockdowns across the world begin to ease.  But they will be no more than that – signs.  They will not be the wholesale resurgence of demand that the OPEC forecasters are predicting and which they suggest will rescue the oil market in its hour of need.

There are three days until the OPEC+ cuts come into force, three weeks until the expiry of the next WTI futures contract and six weeks until the next scheduled OPEC meeting.  Expect a volatile price environment, with a bias to the downside, over the next few weeks as the world tries to assess whether the coronavirus or OPEC+ will gain the upper hand in the battle for oil price stability.