Not that one could tell that from the strong headline job gains, but remember the critical aspect of understanding the economy’s dynamics is that there is the mandated shutdown and reopening overwhelming the data – and then there is recession left in its wake. In August, the number of people on temporary layoff dropped again, this time by 3,065,000. There are now over 6 million still characterizing their job loss as temporary – down from the peak of 20.6 million in April. Back in April the number of those without a job who said the loss was permanent had barely budged, but it has grown steadily ever since, as we suggested it would back in the spring. In August, the number “not on temporary layoff” jumped to 4,147,000 from 3,699,000 in August – a large 12.1% increase. This is the typical recession job loss (see chart below). 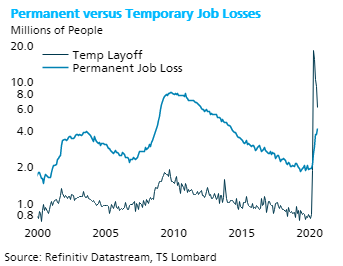 While the unemployment rate continues to drop as the temporary laid-off get their jobs back, the number of permanent job losses essentially translates to around an 8% unemployment rate. Therefore, we would not expect much more improvement in the headline number from here – unless, of course, the unemployed not on temporary layoff starts to drop off (not something we are anticipating). 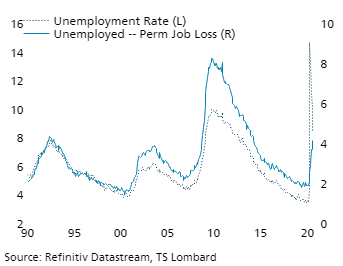 We also see the rise in permanent job loss translating in longer recessionary-type duration of unemployment, even as the unemployment rate drops – not the typical dynamic.

Consumer expectations tend to lead the swings in permanent job losses by around six months, although the current cycle has thrown this relationship a kilter. In the past several months, however, things seem to getting back to “normal” with the declines in sentiment beginning to line with job losses.

The danger for the equity market, and risk markets generally, is that forward expectations among business and consumers never dropped to recessionary type levels, in some cases they did not even broach 2016 levels. If the rise in a real recessionary environment continues to take hold, as the permanent job loss suggests is occurring, this will have a market impact. It will also impact the Presidential race – jobs and healthcare (ACA) start to take the lead in the rhetoric. Healthcare is a weak argument for Republicans – it is why they lost House in 2018 and why they have not put forth any legislation to repeal ACA since (under McConnell’s direction).