With his first string of executive orders, Biden has made clear that climate policy is core to his administration, as we anticipated. This sets the stage not only for coordinated global climate action but also concrete advances in green legislation – including a federal clean-energy standard, which can be passed by a simple majority of votes if structured within strict budget reconciliation guidelines. Recent announcements by the US’ largest automakers, GM and Ford, highlight the inexorable shift to electric vehicles (EVs) by mid-decade, adding tailwinds to Biden’s green plan, even if the President faces big obstacles ahead in reshoring and creating jobs. As fears of stranded assets grow, the fall out will cascade down supply chains, creating new fractures but also growth opportunities across key industries: renewables, mining, batteries, tech and green hydrogen are all set to play starring roles.

Within days of taking office, Biden rejoined the Paris climate accord, cancelled the permit for the Keystone XL pipeline and hit “pause” on new oil & gas permits on federal lands and waters. He also appointed climate “czars” for both domestic and foreign policy and called a global climate summit on Earth Day (22 April), at which the US’ new interim emissions-reduction goals may be unveiled, along with a climate financing plan aimed at ending overseas funding for “carbon-intensive” projects. As both the EU and UK are touting proposals, too, to ban or slash fossil-fuel financing abroad, this will raise costs for Western oil majors ahead, with knock-on effects for energy markets and global trade flows.

Still unknown is how big a role natural gas will play in the energy transition... Biden’s climate envoy, John Kerry, confirmed at the World Economic Forum that Biden is keen to move away from funding overseas natural gas projects, not just coal and oil. Intense lobbying from Big Oil could water down this policy: Republicans are already charging that thousands of jobs will be lost as a result. Biden will also keep an eye on electoral politics, with two open Republican Senate seats up for grabs in 2022 in Pennsylvania and Ohio, home to gas-rich Marcellus shale. Across the Atlantic, strong pushback from 10 countries led by Poland forced the EU Commission last month to back down from strict green finance draft guidelines that had excluded natural gas as a “transition” fuel (new rules are now slated for March or April) – an augur of things to come.

... but as opposition continues to mount, green hydrogen is a likely beneficiary ahead. For oil & gas investors worried about stranded assets – as of December, there were still US$1trn in capex plans to expand global oil & gas transmission infrastructure by an estimated 212,000km – green hydrogen offers key benefits, not least the ability to repurpose existing pipelines for hydrogen transport. Amid steep technical hurdles and no policy mandate, the sector has not yet attracted the same frenzy in the US as in Europe, but we expect it to gain impetus under Biden, as more oil & gas firms diversify into green investments. With the end of the Keystone XL permit, one final way for Canada’s TC Energy to “save” the pipeline may be a pivot to hydrogen as well.

"GM selling only EVs-2035 spurs others to fast-track goals; as natural gas foes mount, green hydrogen will accelerate in the US, not just EU"

Raising barriers for high-emissions sectors, Biden has also forged ahead with revamping the “social cost” of carbon and other greenhouse gas (GHG) emissions – a cornerstone of federal regulations for everything from infrastructure permits to energy efficiency standards for buildings as well as consumer and industrial products. Under Trump, the social cost of carbon plunged sevenfold from Obama-era estimates (see Chart 1); under Biden, higher interim social costs of carbon, methane and nitrous oxide will be fixed this month, with final estimates expected by January 2022. This is low-hanging fruit that will bolster climate policy. While court challenges will ensue, as under Trump, past jurisprudence favours Biden – tilting the overall playing field towards more sustainable projects, despite a new crop of Trump-appointed judges.

By contrast, Biden’s plan to replace the entire federal fleet with clean/zero-emissions vehicles and create 1mn new auto-related jobs faces huge challenges. The President has set a 90-day period to define the details of how to green the 645,000-strong fleet in a “Buy American” push by a still-unspecified date (less than 1% is electric today). To qualify under current federal procurement rules, at least 50% must be US-made content. Union labour will be another priority, although no EV made in the US today meets all these conditions. Given that EV powertrains have 80% fewer moving parts than conventional ones, it is unclear how Biden will create more jobs, instead of layoffs, as more cars are electrified. Rising costs will be another issue if well-paying unionized green jobs are the top priority rather than automating production lines or near-shoring to Mexico, as in the past. In addition, the US faces a formidable competitor in China, which today dominates the supply chains for lithium ion (for EV batteries), rare earths and solar, after massive government subsidies made it the world’s low-cost producer. While the US has untapped potential – for example, it ranks in the global top five for lithium reserves and resources, despite marginal output today – resolving these bottlenecks will be no easy task. 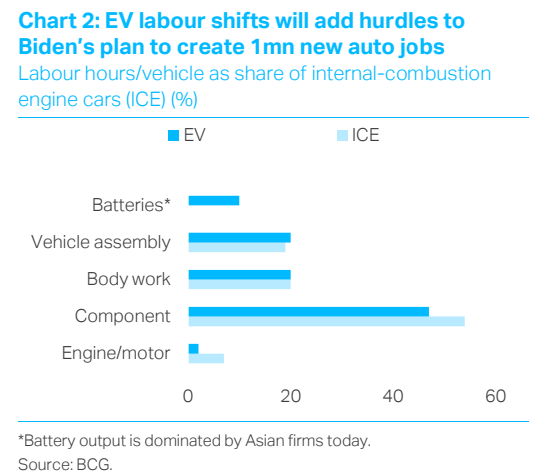 GM’s surprise recent announcement that it intends to sell only zero-emissions cars by 2035 turbocharges the EV trend and moves the goalposts forward for more carmakers. The decision by the US’ largest automaker – after California, Massachusetts, China and Japan all set goals of banning fossil-fuel-only vehicles by 2035 (with the UK ahead of the pack at 2030) – is already creating ripple effects for the global auto supply chain. One week later, Ford doubled its EV bet, announcing US$22bn in EV investments through 2025, while adding another US$7bn for self-driving cars. These moves could help the Biden team set higher fuel efficiency targets and propel the EU to elevate its 2030 auto standards (expected in June).

Yet this alone will not help to drive the US’ industrial revitalization via more green jobs, as Biden’s “Build Back Better” plan envisions. According to a recent BCG study (Chart 2), while the overall labour hours needed to produce an EV is similar to that of internal-combustion engines, a big difference is that EVs require 10% more labour hours when it comes to battery production (dominated today by Asian firms) and 12% fewer labour hours to make the engine and components. To prevent job losses ahead from the massive supply chain shifts, the Biden government will need to encourage new investments in battery plants and technologies. Legislative action is vital to funding Biden’s green plan – look for more progress post-Covid stimulus plan. Once the stimulus is approved by mid-March, the administration will be able to move ahead on its economic recovery, infrastructure and transportation bills. We expect additional EV subsidies and Biden’s campaign vow to build 500,000 EV charging stations by 2030 to be bundled into these bills, which have a good chance of being passed. Another measure that could gain traction is a federal green bank (called the “Accelerator”) with up to US$100bn in financing for low-carbon projects and technologies. Vice-President Kamala Harris was a co-sponsor of a similar bill last year, raising the visibility of this proposal.

While Biden faces stiff opposition to his top targets of a 100% clean power grid by 2035 and economy-wide by 2050, he can use budget reconciliation to secure 2030 targets. Democrats are mulling at least five different ways (e.g., clean energy credit trading system, federal tenders) to muscle through a clean energy standard via reconciliation, which requires only 51 Senate votes to pass. Because reconciliation cannot increase deficits past a 10-year window, it cannot be used to guarantee federal climate targets past 2030. But if the 2030 targets are high enough – activists are calling for 75-80% clean power – it would keep the US on track for a net-zero power grid by 2035, after which falling prices and new technologies may do the rest. A carbon tax can also be passed via reconciliation. Still, one warning sign for Biden is that last week seven Democrats voted with Republicans to oppose any ban on fracking. The key swing vote ahead to monitor will be Joe Manchin, the most conservative Senate Democrat, who heads the Senate energy committee. Manchin favours carbon capture and energy innovation rather than bans and has affirmed that ensuring US energy independence is his foremost goal. But in a signal that progress is likely, he has also said he is open to a clean energy standard, even if his focus on protecting workers in fossil fuel jobs could dilute the final target.

Another hot-button issue ahead as EVs gain more market share is the troubled Highway Trust Fund, which finances most federal spending for infrastructure and mass transit but has run regular shortfalls since 2007 because its main funding source, the gasoline tax, has not been raised in nearly three decades amid bipartisan opposition to a hike. The Congressional Budget Office recently projected a US$203bn shortfall by 2030; but as EVs take off, the hole will only widen further. A longer-term fix could be a new vehicle-miles-travelled tax backed by Transport Secretary Pete Buttigieg, which has also received Republican support. But before it can pass, significant privacy concerns plus metering and other technological issues must be addressed.