With every macro data point we are learning more about the economic consequences of the COVID-19 pandemic. What have we discovered so far? First, the contraction in activity – the largest in modern history – is remarkably uniform across the world’s developed economies. GDP has typically declined by around 15% (not annualized), with “social” sectors hit particularly hard. Second, official lockdowns explain a small part of this contraction and there is only a weak correlation between the stringency of government enforcement and GDP. Consumers – especially the wealthy – have slashed their spending and engaged in social distancing, regardless of government policy. Third, as public fear of the infection has eased and economies have ‘reopened’, activity has started to recover. China, which is further ahead in this recovery than many other nations, provides a template to what we should expect elsewhere. China’s economic revival has been both uneven – different sectors recovering at different speeds – and incomplete, leaving persistent shortfalls in demand (even with large government stimulus). Yet China has avoided largescale job losses and this is where we see considerable heterogeneity in other parts of the world. Different labour-market dynamics could drive uneven recoveries in H2.

The US has suffered most, with massive jobs losses compared to Europe, China and Japan. This is important because corporate decisions – specifically how companies respond to large short-term losses – could have a critical bearing on the depth and duration of the recession. Data issues explain part of this divergence. Millions of workers have been put on furlough and US jobless numbers include a large number of these ‘temporary’ unemployed. A recent Fed study suggests ‘only’ half of US job-losses are permanent, though this is considerably worse than their estimates two months ago. Alternative labour-market institutions have also played an important role in the US-RoW divergence. The States has a famously flexible jobs market, with minimal employment protection and limited trade-union power. Traditionally, economists believed this was a relative strength, but it has become a disadvantage during the COVID-19 recession – especially as the most vulnerable workers have limited job-specific skills. But we shouldn’t underestimate the importance of government policy. While the authorities elsewhere (esp. Europe) have tried to protect jobs – funding furloughs – the US government has used its existing unemployment-insurance scheme to protect the income of those without work. This strategy has important drawbacks, as it encourages worker separations and politicizes the unemployed. 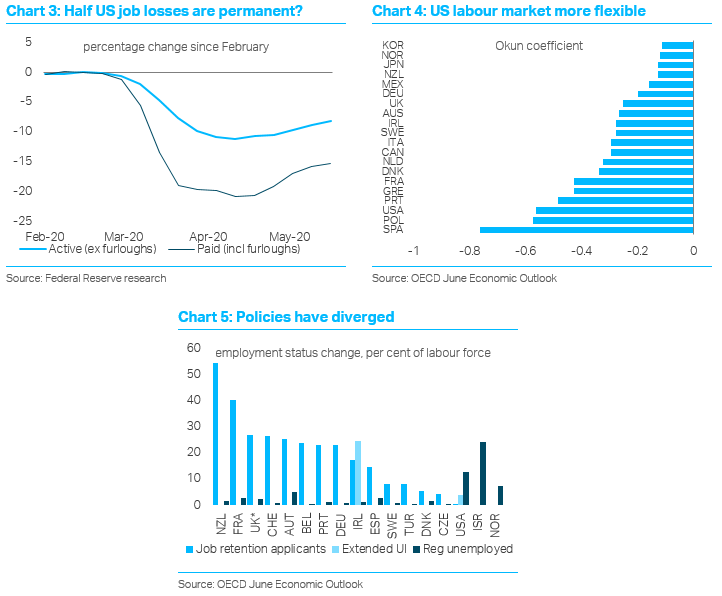 The resilient labour market is one reason Europe could exit this crisis before the US, especially when combined with an infection rate trending towards zero, and an unexpected push towards political integration (versus growing disharmony in the Unites States). Yet there is no sign of Europe’s advantage in equity or currency markets, where international investors continue to have a strong preference for US exposure. Could this situation change, perhaps giving way to a period of European “outperformance”? Euro bulls have lost a lot of money on similar trades over the past decade, pushing an idea that never became mainstream. But in the short term (over the next 3-6 months) EU outperformance is not as implausible as it seems, especially if the continent avoids a ‘second wave’ (which will be tricky). Europe’s main problem is that it lacks domestic growth catalysts, especially the vibrant tech-sector that has dominated US equity returns. This matters in a scenario where COVID-19 leads to permanent shifts in the global economy, including de-globalization, which require a massive reallocation of resources. While Europe’s rigid labour markets (and current policy focus) provide protection in the short term, they prevent the adjustments that are necessary in a ‘U’ or ‘L’ shaped downturn. Europe is poorly placed to ‘grow around’ COVID-19, especially given its continued reliance on external demand. 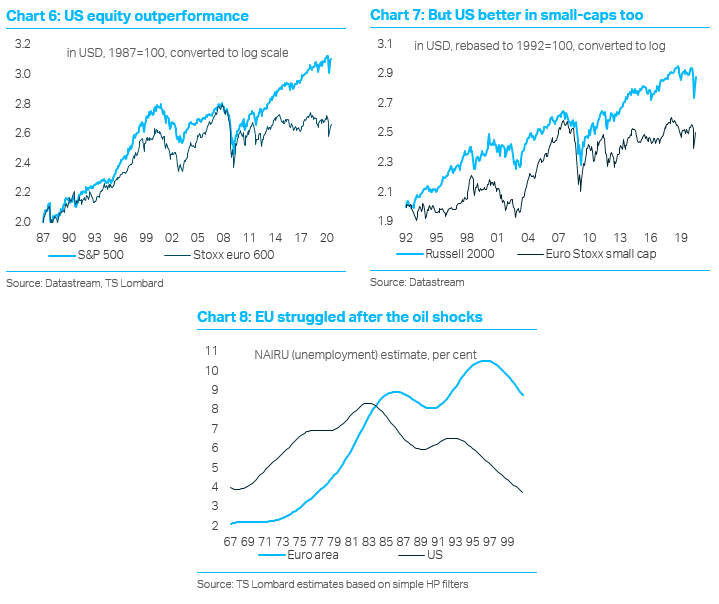