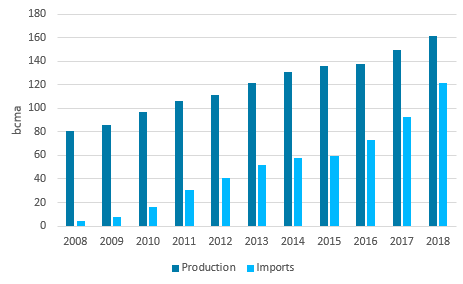 China announced the formal creation of a state-owned enterprise to manage the country’s oil and gas pipelines. This is a reform that has been under discussion for some time and has long been rumoured to be imminent. Now, it has finally arrived – on paper at least.

China’s oil and gas pipelines are owned, controlled and managed principally by the three major national oil companies (NOCs) – CNPC/PetroChina (which owns 63% of the country’s oil and gas trunk pipelines – the largest pipeline network in the world), Sinopec (31%) and CNOOC (6%). The ownership of critical national infrastructure such as the national pipeline network by three companies has led to charges that potential third party users of the pipelines are disadvantaged, that they cannot get physical or commercial access to the pipelines and that China’s energy industry and energy consumers suffer as a result of this market structure. The capacity of the pipeline network is also insufficient for the current energy demand in China.

Pipeline reform has been on the agenda for some considerable time and is a key step in the liberalisation of the oil and gas market. A large energy sector overhaul was first discussed in 2014 and was outlined most recently in March when China’s National Development & Reform Commission sent its work report to the National People’s Congress. The State-Owned Assets Supervision and Administration Commission (SASAC) will be the new pipeline company’s regulator and will own a 40% stake in the new company. CNPC will own 30%, Sinopec 20% and CNOOC 10%.

The new company will separate the exploration, production and processing of oil and gas from its transportation, with the aim of increasing competition in the market. Third party companies (such as traders, refiners and gas importers) will, in theory, be able to gain access to the national pipeline network and use it to access customers across China. This increased level of competition should in time lead to lower prices for oil and gas in China. The company will not only be responsible for operating the existing pipeline infrastructure but also for constructing new pipelines and interconnections, storage and peak shaving facilities for the natural gas sector and for advising market participants of transmission and storage capacity availability.

The challenges for the new pipeline company are many and varied. Part of the rationale for its creation is to lower the cost of gas to consumers in China and thereby stimulate the demand for gas as a way of reducing the use of coal in the economy to improve China’s environmental quality. In 2017 and 2018 gas demand rose exceptionally strongly as the country’s coal-to-gas switching programme ramped up. Demand growth has moderated this year – partly as the switching programme has slowed down and partly because of concerns over the country’s rising energy import dependency. Hence, stimulating gas demand in the same way as in previous years is probably off the agenda.

There will be a need for further investment in the oil and gas pipeline network to meet rising energy demand so the question must be: where will this money come from? One option that has been suggested to raise finance in the past is the sale of a stake in the business to outside financial investors since the regular cashflows from an infrastructure business are likely to be attractive to financial investors. It is possible that the new company will eventually seek a market listing and determining the value of the company – as well as the value of the assets that each company contributes - is likely to be both a commercial and a political process. The initial plan is for the three NOCs to hold a majority stake in the pipeline company at the outset, although this which brings with it the risk of regulatory capture by the industry which could frustrate Beijing’s objectives of liberalising the country’s energy market.

There are already reports that the three NOCs will second staff to the new company to manage it. While this is almost inevitable given their technical and engineering knowledge, it is likely to cause a conflict of interest between their new pipeline company employment and the company to which they will ultimately probably return.

Finally, while the aim of the reform is to reduce the cost of energy to end-users in China and lower pipeline transmission costs are seen as part of that, if we look just at natural gas, it is not immediately obvious that gas prices will come down in the short-term. The NOCs lose money on imports of LNG and pipeline gas as the increase in gas consumption outstrips the increase in gas production in most years and they make some of those losses back on the sale of domestically produced gas. It is quite likely that they will prefer higher, rather than lower, end-user prices in order to recoup the losses on imported gas.

The separation of the pipeline business from the three NOCs will have the most significant impact on PetroChina, with Sinopec and CNOOC less impacted. Pipelines are a relatively important part of PetroChina’s business so the loss of revenues will be noticeable; that said, with China’s pipeline network requiring significant expansion, PetroChina would otherwise have had to invest billions of dollars to finance that expansion, money which it will no longer need to find as that will be the responsibility of the new pipeline company.

It will take some time for the new pipeline company to be created in reality as opposed to on paper. But it is a positive step forward in terms of energy sector reform in China. Its success or failure can be judged on several criteria – expanding China’s domestic pipeline capacity, third-party access to the system and the efficiency of the pipeline system itself.