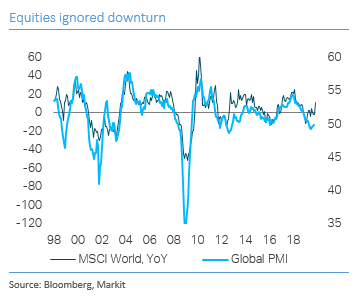 Investor sentiment has shifted in recent weeks. This was certainly the message from the latest BoAML survey – which showed portfolio managers, distinctly less negative about the global economy, suddenly piling into equities. The reflation theme has also appeared in our recent interaction with clients. Meanwhile, the S&P 500 has jumped to new record highs and bond markets have sold off, with the share of negative yielding-debt starting to look a little less scary.

While policy easing from central banks has surely contributed to this reappraisal of the outlook, investors have also taken heart from the continued resilience of US macro data (especially the labour market). Yet, for investors hoping to see signs of genuine improvement in the global economy, the evidence so far is rather underwhelming. Leading indicators remain subdued, with no sign of a turn in the global capex or manufacturing cycles.

At best, it seems several industry-specific drags on the global economy have eased, notably auto demand and overcapacity in the tech sector. But the main causes of the 2018-19 downturn remain in place. Trade uncertainty continues to discourage investment, while the authorities in China are no longer willing to provide the catalyst for global growth, resisting pressure for a 2016-style credit splurge. 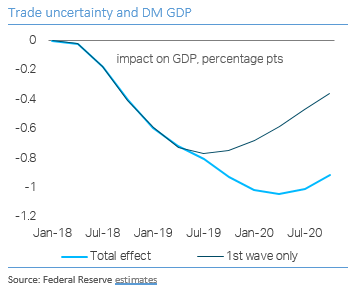 Sustained dollar strength is also a serious problem for the global economy. While standard economic theory suggests a rise in the exchange rate should help to narrow growth differentials between the United States and the rest of the world, this is not what we observe in reality. Since global trade is typically invoiced in USD and the majority of international lending is denominated in dollars, US currency strength damages the rest of the world even more than it hurts the United States, which means it feeds on itself, compounding existing growth differentials and spreading deflationary pressures around the world.

A recent BIS study provides fresh evidence for the role of the dollar in the modern financial system, using firm-level data to show how USD appreciation forces banks to restrict cross-border lending and cut trade finance, particularly where long international supply chains are involved. Currently, of course, there is a debate about whether dollar strength reflects insufficient supply of US currency, particularly the Eurodollar ‘shortage’, or persistent interest-rate differentials. These are two sides of the same problem. While the Fed is taking action to improve the availability of dollars internationally, by injecting new reserves into the system, negative policy rates in Europe and Japan will ensure continued USD strength.

Looking into 2020, we are likely to see a modest and gradual improvement in the global economy. While a permanent solution to the trade war seems unreachable, the US and China should be able to cobble together a short-term ceasefire, which would be sufficient to restart the global capex cycle. Manufacturing activity would improve before the current weakness has spread to DM labour markets and consumer demand. Even a modest improvement in global demand would justify a further rally in risk assets and another selloff in bonds.

Yet, it is difficult to imagine a really powerful revival in demand, sufficient to produce a genuinely reflationary episode. This is because there is currently no ‘balance sheet’ for such a recovery. Banks remain reluctant (or unable) to lend, there is no consensus for aggressive fiscal easing, and the monetary authorities are struggling to reignite the search for yields. The two most important catalysts for the post-2008 expansion – China and capital markets – are no longer playing this role. If these themes continue, the best we can hope for is another ‘mini-cycle’ in activity. This would extend what is already the longest (and weakest) expansion in modern history, but it would not be sufficient to break the New Mediocre or deliver a sustained rise in real interest rates. 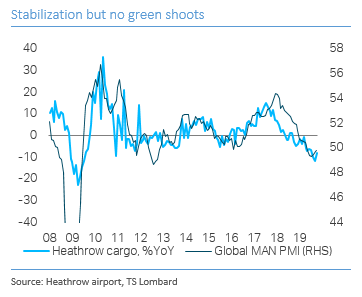