Is peak oil now behind us?

In the last blog on energy a couple of weeks ago A bad week for Big Oil... with worse to come?, I highlighted two different views about Peak Oil out in the market: those who thought that the moment of Peak Oil (as in maximum oil demand rather than worries about maximum oil production – which today seems a somewhat outdated concern) was now behind us and those who thought demand would definitely recover, essentially because of transport and chemicals/plastics manufacturing, and we’d all be off to the races again.  I said then that the latter group seemed unreasonably optimistic about the world economy and its ability (or desire) to return to the old ways – and I thought there was more evidence to support the view that we really had passed Peak Oil.

About a week ago BP’s new CEO Bernard Looney also acknowledged that we may have already seen Peak Oil (as did Shell’s CEO Ben van Beurden).  Mr Looney noted that the impact of Covid-19 was likely to be ‘less oil demand’ rather than ‘more oil demand’.  It wasn’t certain of course, there are too many variables at play he admitted but in my view it is now a realistic possibility that the path of oil demand has changed from one looking at increases until a peak in the 2030s to one where we look in the rear view mirror and no longer see the upslope because we have passed over the peak to the other side.  All we see is the downslope behind us and perhaps all we can foresee is an even longer downslope ahead of us.

A few weeks ago, we were looking at an estimated fall in demand of 30 mbd during 2Q, a 30% decline in quarterly demand which equated to a 9.3 mbd decline in overall 2020 demand.  The IEA’s latest Oil Market Report is slightly more optimistic on demand:

Taken together that means 2Q demand is now forecast to fall by 20 mbd and annual demand is likely to fall by 8.6 mbd rather than the 9.3 mbd forecast last month – largely because of the impact of economies gradually reopening around the world – including China, where 2Q demand is expected to be 1 mbd higher than the 1Q figure as activity restarts.  Even this lower annual decline the IEA sees will still be the greatest in energy history.  That decline is concentrated in 2Q but also spills over into 3Q and 4Q in this latest analysis.

Together, these mean that oil demand, which has grown at 1.2% a year over the past decade, may never again reach the 2019 level.

The OPEC+ production cuts announced in April came into effect from May 1st and those cuts have since been stepped up with the addition of other countries’ efforts and larger reductions promised by OPEC+ itself.  The agreement in April was set to cut 9.7 mbd from global output from OPEC+ from May 1st with an aspirational total of 20 mbd if and when non-OPEC countries joined in.  Well, those non-OPEC countries do seem to be joining in.  The IEA calculates that US and Canadian output in April was 3 mbd lower than at the start of the year and that there is more to come, talking of a further fall of 1 mbd in North American output in 2Q.  Bakken Shale output in the US is already down by a third while shale production in the more prolific Permian Basin has also been cut.  The IEA estimates that output from countries outside the OPEC+ group will be 4 mbd lower than at the beginning of the year.  With breakeven prices at $45/bbl for the Bakken and $48/bbl for Permian Basin production, the market is responding in the right way to excess supply and lower prices.

Saudi Arabia has announced that it will cut an additional 1 mbd in June and both the UAE (with a cut of 100 kbd) and Kuwait (with a cut of 80 kbd) have joined in.  Reflecting the sleight of hand necessary to construct the OPEC+ deal, Saudi output will be just 900 kbd lower year-on-year than the level at the end of 2019 because the country increased output in the runup to April.

Prices
The IEA highlighted that oil production would hit a 9-year low this month with all the cuts totalling 12 mbd.  So, there is certainly momentum behind the OPEC+ agreement and oil prices have recovered to over $35/bbl in recent days. 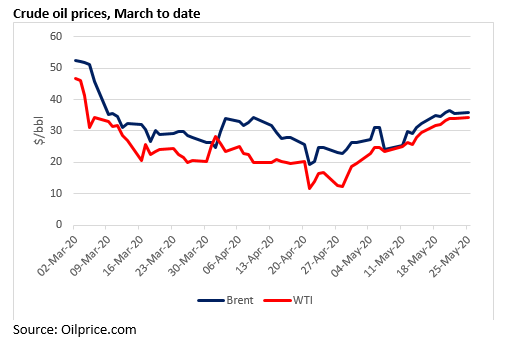 The good news, as I note above, is that…there is actually good news.  Russia has indicated that it will comply with the OPEC+ agreement, Saudi and its Gulf allies are cutting more than expected (and Saudi is raising listed prices for sales to the US), there are voluntary reductions from countries like Norway and involuntary ones from high-cost producers such as Canada and US shale.  The IEA’s estimate of future demand is also less bearish than it was a month ago and we see US oil demand rising by 9% week-on-week (although still down 4% year-on-year).

So perhaps we see a floor in prices at around $35/bbl for now.

The big question hanging over the supply side is whether compliance is going to remain strong enough for long enough to get prices to a level that works for both producers and consumers and $35/bbl isn’t that number.  The chart below shows the problem.  With Brent crude at $35/bbl, none of the producers in the table below – which together represent 53% of world oil supply – balance their budgets.  So, further production cuts – along with signs of continuing economic recovery driving demand - are going to be needed. 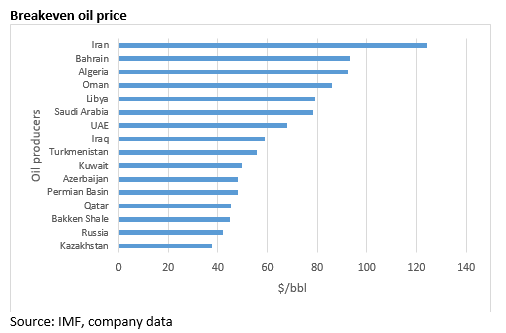 What to look out for in the future
There are a few things to keep an eye on around the oil market.  The most interesting ones are: