Japan: nothing more permanent than a temporary solution

The appointment of Yoshihide Suga marks the end of Abenomics in name, but not in substance. And while this may look like an opportune time to press on somewhat harder with 'third arrow' structural reforms, we would not hold our breath.

The political clock is already ticking. Mr Suga gets to serve only the remainder of Abe’s term, so he will need to fight for re-election at next September’s LDP party convention, What is more, if he wins he will have to lead the party in a general election no later than 22 October 2021. What all this means is that the new PM has an incentive to try to hit two birds with one stone, i.e. call a snap general election sooner than later. History shows that a strong mandate from the general public is a sine qua non for a successful premiership. While the super-majorities achieved by Abe in the Lower House elections will be hard to replicate, the simple fact is that Mr Suga’s political survival depends on delivering – and delivering fast.

Still, Shinzo Abe’s weighty political legacy has its positives for his successor. LDP’s policy platform has already adopted a pledge to refrain from additional VAT hikes at least until 2029, which means that repeating the policy mistake of another increase in consumption tax is off the cards. Moreover, Suga has taken the reins at a time when economic policy is already in full deflation-fighting mode. The BoJ’s explicit shift to open-ended JGB purchases ensures, in effect, that the government can run larger budget deficits without worrying about an imminent tightening in financial conditions. And as the Fed and other major central banks now switch to a “make-up” strategy on inflation, the BoJ has had an “inflation overshoot” pledge in place since Yield Curve Control was introduced back in autumn 2016.

Governor Kuroda has said he stands ready to do more – although we expect the focus of any additional measures to be aimed at boosting bank lending rather than driving the yen down, in contrast with the early days of Abenomics. In nominal effective terms, the yen stands around 5% above its 25-year average; this compares with more than 25% when Shinzo Abe took the reins. This year, the yen has been relatively stable and, if anything, has weakened over the summer relative to the currencies of Japan’s major trading partners (CNY, EUR, KRW), although it is its resilience vs the dollar – underpinned by narrowing real interest rate differentials – that has grabbed headlines.

But maybe the main point is that the reflationary boost to global demand from a weaker dollar is arguably more important at this juncture than the “zero-sum” gains conferred by a more competitive exchange rate, i.e. the “income” effect outweighs the “substitution” effect.

The Japanese economy is gradually getting back on its feet, led by improvement in manufacturing. High-frequency indicators show industrial activity is bottoming out: factory output, machine tool orders and exports have all enjoyed a “V-shaped” rebound this summer. Yet all these metrics remain well below their pre-virus levels – testament to the size of the hole left in demand from the pandemic.

Unlike in 2018-19, it is the weakness in services – dragged down by weak consumer confidence – that is threatening to contaminate the manufacturing sector rather than vice versa. It was the service sector that accounted for the bulk of the 33% slump in ordinary profits experienced by Japanese corporates in 2020 H1. And while 2020 Q2 has probably marked a bottom for earnings, this will hardly brighten the outlook for capex and hiring over the coming quarters, keeping a lid on private demand. 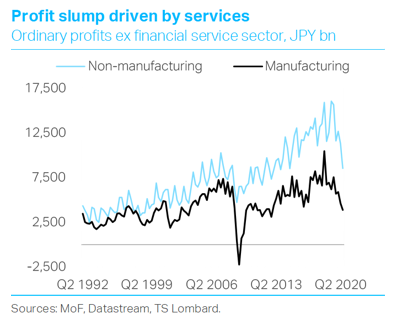 While the blow to real activity from Covid-19 has been less severe in Japan than in the US and Europe, we still expect real GDP to return to its pre-virus level no earlier than in 2023, propped up by fiscal stimulus. The difference, however, between alleviating a cyclical downswing and sowing the seeds for a sustainable macro revival lies in structural reforms. While large-scale fiscal stimulus will give demand a much-needed boost, it will also rekindle the deep-seated domestic financial imbalances – marked by excessive business saving – that continue to hold Japan’s economy hostage.