The medium-term outlook for China’s gas demand remains bright. Most observers – companies, governments, consultants - see gas as a replacement for carbon-intensive coal in China’s energy mix or, at worst, as a bridge fuel towards a lower-carbon future for China.

The short-term – 2020 – however is looking a lot less certain. Gas demand in China has risen steadily over the last twenty years, and at very high rates more recently because of supportive government policies. But 2019 saw a slackening of that growth, down to an estimated 9% according to Sinopec, reflecting a weaker Chinese economy, less supportive government policies, US-China trade tensions and slow gas sector reform. 2020 is unlikely to break this trend.

Domestic gas pricing and the impact of the coronavirus on China are perhaps the key underlying issues here. As far as pricing is concerned, other things being equal, with lower gas prices the outlook for gas demand in China is widely expected to be healthy. Added to this are rising pipeline volumes from Russia now that the Power of Siberia line has commissioned and the prospect for deeper sector reform with the creation of a national pipeline company, separated from the three national oil companies.

Sinopec has recently suggested that the Chinese gas market will be oversupplied in 2020. Overall gas supply (production and imports) is forecast to rise by 8.9% to 335 bcma this year. Demand, however, will rise by just 8.8% to 329 bcma – with the slowdown being largely the result of the decreased government emphasis on the coal-to-gas switching programme.

At the same time as demand growth has been moderating, however, President Xi has ordered an increase in China’s domestic oil and gas production on the grounds of national security, amid growing concerns about China’s degree of import dependency. Chinese gas production is expected to rise by as much as 6.7% this year and enable import dependency to be maintained at the same 44% level as last year. Imports are forecast to rise by 11.7%, driven partly by growth in Russian volumes through the newly-opened pipeline.

Medium-term demand growth is forecast to be fastest in the residential and commercial sector, while gas use in power generation is currently constrained by the fact that gas is a more expensive option in the sector, with both coal and renewables being cheaper fuel sources. The creation of the national pipeline company (PipeChina) has been seen as one way of reducing the cost of gas to end-users, principally through lower gas transmission tariffs, thereby increasing demand.

Looking forward, despite the fact that the process of creating PipeChina has consistently been delayed, the majors have publicly remained optimistic about the demand for gas in the power sector, with Russian imports pressuring prices and reform leading to lower transmission tariffs. CNPC has predicted that gas will play an increasingly important role in the power sector. Despite the fact that the 2020 target for installed power generating capacity of 110 GW will not be met (with the actual capacity likely to be 95 GW) the company suggests that 2035 capacity will be between 240-300 GW depending on the extent to which the government pushes coal-to-gas conversion in the power sector.

The ongoing coronavirus outbreak in China has been described as China’s “Black Swan” event. Not only has it affected gas demand in China but also across the world, leading to low global gas prices and damage to energy companies’ earnings, in China and overseas.

China’s gas consumption is expected to be significantly affected in 2020, with much of the demand reduction taking place in the industrial and commercial sectors of the economy because of the extended shutdowns following the Chinese New Year. If we take the Sinopec projection of 329 bcm of gas demand in 2020 as our base case, CNPC recently downgraded its own 2020 forecasts to 330 bcm while the Chongqing Exchange suggested that the impact of the coronavirus could be as much as a loss of 10 bcm of demand if the outbreak lasts up to three months – although the extent of any decline depends on the duration of, and recovery from, the outbreak and the government has suggested that demand could decline by 20 bcm if the problems persist until June. Domestic gas traders are reported to believe that 1Q20 demand could be as much as 30% lower than the same period in 2019. Based on comments from CNPC Chairman Dai Houliang, China also seems set to continue its recent focus on growing domestic gas output which will have an impact on the country’s presence and activity on the world’s LNG market.

Apart from the extended shutdowns, there is a degree of dislocation in the economy as migrant workers need to return to their work locations before production can resume effectively and a number of local governments appear to have taken infection-control measures very seriously and this may delay the resumption of output.

Alongside the fall in demand, storage tanks at LNG terminals are full and a number of Chinese companies are seeking to defer or cancel planned future LNG carrier arrivals some, like CNOOC, on the grounds of force majeure while some of the city gas distributors are seeking cheaper spot cargoes now that market conditions have changed. Not all of China’s LNG suppliers accept the claim that the coronavirus is a force majeure event so while CNOOC is arguing its case, other importers such as PetroChina and some of the smaller companies are less keen to engage in a lengthy legal dispute. CNOOC in particular seems to be facing serious difficulties and is considering the closure of its LNG trading unit and reverting to being just a terminal operator. The company has lost money on imports of expensive LNG under term contracts and now that the situation has been exacerbated by the collapse in demand caused by the coronavirus outbreak. CNPC and Sinopec have faced similar losses on imports of expensive LNG while domestic prices remain controlled by the government.

While LNG carriers themselves face difficulties in reaching some major markets like China because of quarantine restrictions by sellers on delivery ports, Russian piped gas supplies continue as normal and appear to be unaffected by the coronavirus outbreak despite the Russia-China border being closed. The Russia-China energy axis is clearly important to China and it looks as if CNPC will continue to accept deliveries from Russia under the its contract despite the short-term fall in Chinese demand.

Global LNG prices have fallen sharply, pressuring Chinese and international energy companies as a direct result of the problems in China, prices of LNG in northeast Asia have fallen to record lows of $2.80/mmBtu in recent weeks (around a third of the level a year ago), having fallen fairly consistently since the beginning of the year. A very modest price gain on recent volumes might suggest that a price floor is near but much depends on the extent of the industrial disruption resulting from the coronavirus outbreak.

The easing of gas demand in China and its impact on gas prices has implications for the country’s LNG terminals, global LNG trade, US-China relations and the country’s broader environmental performance, all issues which we will examine in future blogs. 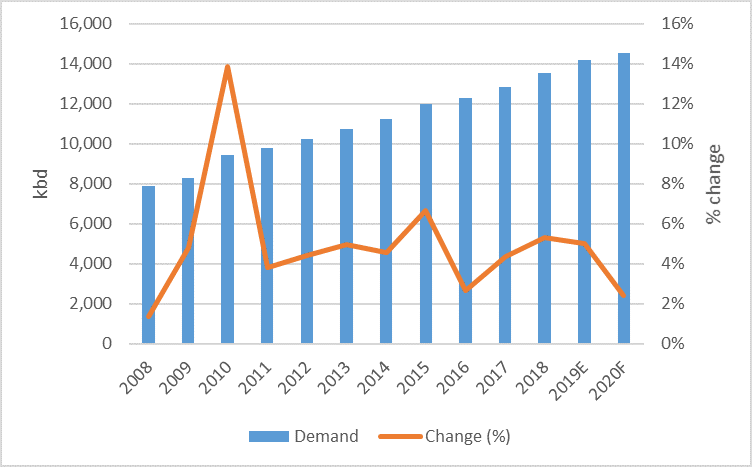