Oil price declines and the impact on China’s energy complex

Oil prices have been steadily declining in recent weeks as the impact of the coronavirus on energy demand in China and the rest of the world has become evident. This slide accelerated significantly at the beginning of this week when Russia decided to end its cooperation with OPEC on reducing world oil production, which had been a way of increasing prices and oil revenue. Crude oil in the US fell by as much as 34% after the failure of the agreement was announced, reflecting concerns about a market already oversupplied because of the fall in demand and now driven even lower by an unexpected increase in supply. 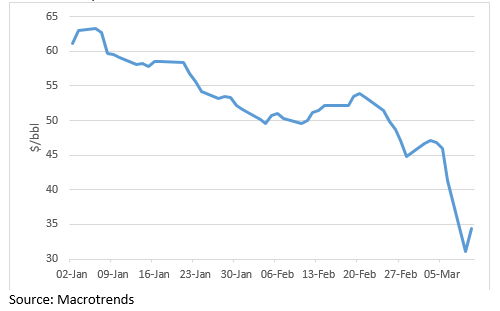 Globally we would expect high-cost producers - such as shale oil and gas producers in the US – to be most affected by a sudden plunge in the oil price and that may well be the case – although the most recent previous price fall did not have that impact as companies continued to produce and investors remained supportive. The shale sector in China is much smaller than in the US both because of China’s geography and the structure of its energy sector.

What is the impact on China of these sharply lower oil prices?

We can look at this from a number of perspectives:

Energy production and the NOCs

The national oil companies will face similar problems as oil companies globally as far as the profitability of their production is concerned. Lower oil prices will clearly lead to reduced profitability in the companies’ domestic production operations. While that may be moderated to some degree by possible tax reductions, capital expenditure is likely to come under pressure as cashflows decline and that will almost certainly lead to medium-term production lower than would otherwise have been the case had capex been maintained. Again, this is the same situation faced by other oil companies globally; the difference in China is that supply security has become a much more important issue to Beijing than it was two years ago. Since then President Xi has told the industry to increase domestic energy production and reduce the country’s import dependency. Hence, some financial relief for the companies may actually emerge, even though the sector is relatively small in terms of China’s overall GDP, with the entire fossil fuel industry representing just 1.2% of GDP and 1% of employment. Russian pipeline supplies of oil and gas are seen as reliable and secure, but the country cannot supply all of China’s needs and hence Beijing has been careful to maintain good relations with a wide range of energy suppliers while also accepting the higher costs of domestic oil and gas production.

Lower oil prices – which will feed through to gas prices via spot LNG pricing in the Asia-Pacific region – are a net benefit to the economy and to the finances of, in particular, the independent gas companies. Their feedstock acquisition costs will fall since the majority of their gas supplies are sourced from the spot market. The NOCs source a much higher proportion of their gas from term contracts concluded with Qatar, Australia, Malaysia and most recently Russia, etc than from the spot market and the term contract gas is generally more expensive – the NOCs have for some time highlighted the losses that they make on domestic sales of imported gas. There are certainly reports that at least one of the Chinese NOCs – Sinopec- has attempted to claim force majeure on its LNG import contracts because of the fall in gas demand caused by the coronavirus and there are potentially some contract renegotiations on the horizon – although not all suppliers are willing to accept an unexpected fall in demand as a force majeure event. Hence lower spot prices will benefit all importers but will have a greater impact on the finances of the independent gas companies which can use them to extend their gas supply businesses in China.

One other beneficiary of the lower oil price are the “teapot” refineries, predominantly located in Shandong province. With government-set retail prices in China having a lower bound of $40/bbl, once crude prices fall below that level, teapot refinery margins surge. That is the position currently in China. Two weeks ago utilisation at these refineries was 37%, now it is a much more typical 65-70%.

We have in the past seen China step in and buy substantial volumes of oil when prices fall sharply, with the aim of adding those volumes to the country’s oil stockpile, where volumes are typically lower than the 90-day average many countries like to regard as a safe level. That may happen again this time round, although it is possible that storage volumes are running at higher than usual levels if the estimated 20% decline in oil demand has not been matched by a decrease in purchases in recent weeks, leading to higher-than-normal stock levels. China may also conclude that worse is yet to come in terms of the Saudi-Russia standoff and oil prices and hold off making significant purchases until the market settles at a level it deems favourable to buyers. While President Xi’s demand for better energy security will not be forgotten, short-term opportunistic acquisitions of oil and gas cargoes are unlikely to be rejected if they are financially attractive to China – although the longer-term aim of greater energy security will remain extremely important.

Lower oil prices will certainly be a stimulus to China’s economy, which has of course been badly affected by the coronavirus disruptions, even though government price controls designed to discourage excessive consumption will limit the direct consumer benefits. While the government wants to reduce the role of coal in the energy economy in favour of gas, nuclear, solar and wind power, coal volumes will likely grow in absolute terms. Lower oil prices will help both oil to retain its role in the economy and gas to grow its position even though the government’s coal-to-gas switching programme, which caused the rapid gas demand increases seen in recent years, has been dialled back.