OPEC+ agreement: A band-aid to delay the crisis

Over the past weekend OPEC+ (OPEC plus Russia - and now plus a few other countries as well) announced that it had reached an agreement to cut oil production in response to the dramatic falls in oil demand following the economic dislocation caused by the Covid-19 virus.

Supply/demand
Global oil demand is around 100 million barrels per day (mbd) in a typical year (and rising by about 1% a year).  Current estimates of demand are for a decline of 30 mbd against the 100 mbd initially expected.  Couple this extraordinary change in demand with a falling out between Saudi Arabia and Russia over production in early March and the stage was set for a dramatic decline in the oil price.  Brent fell from $66/bbl at the beginning of the year to under $25/bbl on April 1st with the steepest decline taking place after the failure of the producers’ cartel to agree in Vienna.  Everything else in the energy sector since then has been about trying to find a solution to this self-inflicted crisis. 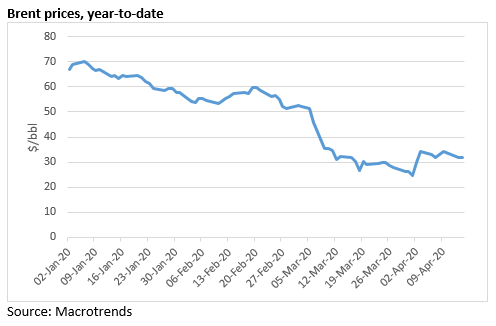 At the end of last week, a solution seems to have been reached.  Whether it is the signal for a rally (unlikely) or for a price floor (more likely but still uncertain) depends on a number of factors – such as the speed of implementation, compliance, monitoring and the willingness of countries not in OPEC+ to go along with the deal.

Saudi Arabia
Saudi Arabia wants higher prices since its budget is based on oil at $80/bbl.  It needs oil revenues to finance its transformation away from oil under MBS’ ‘Vision 2030’ plan.  While it was willing to cut output, it did not want to be the main – or only – contributor to the output cuts.  It wanted others to join in and on March 8th it became clear that Russia was not going to join in with those cuts.  The OPEC+ meeting dissolved without agreement, prices fell, and it was those falling prices – along with seemingly some cajoling and pressure from President Trump that brought the parties back to the table last week.

Russia
Russia’s budget is based on $42/bbl so it has somewhat less pressure than Saudi Arabia, nevertheless the country did use $7 bn of its forex reserves to support the ruble in March and the currency still fell 30% so a low oil price is not cost-free for the country.  Politically, the agreement is positive for President Putin, reflecting an acknowledgement that Russia is important to the health of the global oil sector and providing an opportunity for President Putin to interface more frequently with President Trump after a period of strained relations between the two countries.  The falling prices over the past month are also likely to have been a key factor in bringing Russia back to the table. 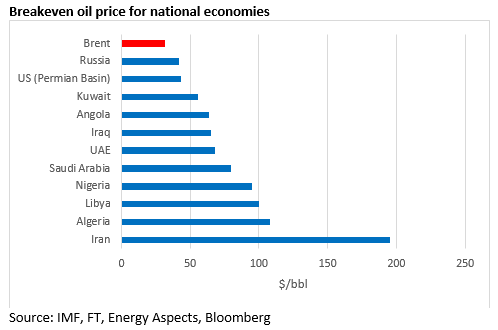 United States
President Trump started as a president focused on cheaper oil to keep the economy strong but, with the US now a major oil exporter, has metamorphosed into a cheerleader for the domestic oil industry.  He was successful in getting Russia and Saudi Arabia to the table and to actually agree a deal.  The US shale industry suggested tariffs on Saudi and Russian oil imports which perhaps helped his path to brokering a deal – particularly one that did not mandate any cuts in US production (although as part of the deal-making process he did suggest that the US would help out Mexico with a cut since the latter was struggling to come up with one and the Mexicans could repay the US later).  Clearly the president likes both low prices for consumers and high prices for businesses.  But with most of the US population locked down, lower prices are not going to stimulate oil demand, there is virtually nobody out there to consume more oil at any price.  On balance then the interests of the oil sector won out.

Agreement
The outlines of the deal are that in May and June OPEC+ will reduce output by 9.7 mbd, from July to December the output cut will be 7.7 mbd and from January 2021 to April 2022 oil output will fall by 5.8 mbd.  The headline initial cut of 10 mbd became 9.7 mbd in the final agreement while the talk of a 20 mbd reduction in output relies on various other countries’ output declining because of lower prices, such as US shale, Canadian tar sands, as well as creative accounting with volumes from Libya, Iran and Venezuela.  In reality, that seems like something of a fudge.  Initially Russia opposed including in the main deal any US reductions caused by the price falls but eventually backtracked and output cuts like that are in the larger 20 mbd cut which has been widely discussed.

Will the agreement work?
The first question the market asked was: can a deal be reached?  It looks as if that question has been answered: yes, in theory it can.  The second question is: will it work?  That question remains open.

The main concern we have is compliance.  Compliance has always been a problem for the OPEC cartel since there is an incentive for each country to cheat (as long as they are the only one cheating) by increasing output once the initial crisis has eased while others stick to the agreement – thereby securing a higher price for higher output.  Russia has also been known to not always stick to its agreements, with higher exports of products replacing crude exports during previous ‘agreements’.

With the use of high baselines against which to benchmark output reductions, the actual cuts may be less than the headline numbers being reported.  The announced cut of 9.7 mbd has been calculated by some analysts to be as little as 7 mbd against current output levels, which are already lower than the baselines in the agreement.  The most recent Saudi production data from the IEA suggested February output was 9.6 mbd (although it did briefly hit more than 12 mbd in early April) while Russian output in the same month was 10.4 mbd.  The agreement sets a baseline of 11 mbd for each of these countries – meaning that even if they change nothing, output will likely still be seen to “fall” by 2 mbd against the target they have set for themselves.

Compliance will be an issue with this agreement as well, make no mistake.

Other concerns beyond compliance are that the demand fall may be larger than forecast – in reality since the world has never been through an event like this, forecasts are helpful for planning but may ultimately prove to be inaccurate – demand in the second quarter is now expected to be 12.5 mbd lower than previously forecast.  Even China’s ongoing exit from its coronavirus lockdown is unlikely to absorb much of the world’s excess supply of oil since Europe and the US are currently going through their own economic and physical lockdowns.  Supply cuts may be needed for longer – but how long will the myriad range of producers involved in the cuts be willing to sacrifice output to stabilize prices which means we have to question their long-term sustainability.

Summary
With oil demand forecast to be down perhaps 30 mbd this year, the agreement suggests production cuts of 10-20 mbd.  The 10 mbd cut is actually 9.7 mbd before we consider initial baselines being set at too high a level and the predictable problems of compliance; the 20 mbd cut requires a lot of countries not around the table to reduce their output.  Some of that may happen for economic reasons with low prices (and storage capacity filling up) forcing production offline.  Some in the US shale industry have suggested that, if there were no agreement, prices would hit $10/bbl and 6 mbd of US shale output would be lost.  If an agreement stabilized prices at $35/bbl (and today it is $32/bbl) – still very low for most national and company budgets – the US would still lose 3 mbd of output.

In summary: we see the deal as a band aid on the problem, likely to delay the reckoning of a lower oil price environment, not a long-term solution to today’s grave mismatch between supply and demand.  It falls short of what needs to be done and its effective implementation is questionable based on past experience.  Lower prices seem inevitable, they will help the economic recovery – but only when populations are out of lockdown and able to take advantage of those lower energy costs.