OPEC+ agrees to extend big output cuts for another month

Late last Friday night I was asked to comment by a well-known journal on what OPEC+ might do about oil production, given that their next meeting was fast approaching.  I said I thought they would extend their 9.7 mbd cut from end-June until end-July but not go further at this stage, such as to the much-discussed end of September date.  That would mean accepting that there was going to be pain for three more months, it was much easier to take it a month at a time I said plus…OPEC+ couldn’t even agree on when they were going to hold their next meeting (first it was this week, then it was going to be brought forward to the week just passed, then it wasn’t going to move) so taking tough decisions on output might be a challenge too far I thought.

No sooner had I said that than OPEC+ announced they were meeting virtually on Saturday morning, which they duly did.  And agreed to extend their 9.7 mbd output cut by one month as predicted.  So far so good.  Now, what does it mean.

The new deal
The new deal is, broadly, just the old deal – extended by a month.  The July output cut was actually meant to be a smaller cut in output (so in effect an increase in output ) than June’s 9.7 mbd cut to a cut of 7.7 mbd in July which would run at that level through December.  So, the overall additional reduction for the next month is a headline figure of 2 mbd.  But the fact that it was extended sends a positive signal on the cartel’s desire and willingness to keep oil output down as a way of increasing prices and stabilising them at a higher level.

After the very public falling out between the members in March and April, that will be a relief to many in the oil market.
There are two wrinkles – one small, one big.  The small one is that Mexico won’t be taking part in these cuts (which it has supported until now with a 0.1 mbd reduction even though it was fairly unenthusiastic about it) so the total headline cut will be 9.6 mbd.  The big one is that Saudi has been cutting output by an extra 1 mbd during June – that cut is not being extended into July.  As a result, output against actual June production will not be 1.9 mbd lower but just 0.9 mbd lower.  However, that’s been enough to move prices moderately higher.

Issues
The number one issue with any deal to restrict output is always compliance – and so it has been here.  May compliance has been calculated by Petroleum Intelligence Weekly at 85% for the OPEC 10 and 86% across all the countries that promised to cut output.  But there are extremes – Saudi and the UAE hit 100% of their target while Russia hit 96%.  Less committed countries didn’t do as well – Angola managed 54% and Iraq just 49%, while Libya (which is exempt from the cuts) is bringing more oil to market as demand improves and that could be as much as 0.3 mbd when fully recovered.  Both Saudi and Russia called for greater compliance from other states, a call we have heard many times before, although this time the group is insisting that those who overproduced against the new target in May (and who do so in June) will need to make up that overproduction during 3Q.  We shall see how that works out, but I wouldn’t be too optimistic that the under performance will be made up based on past experience. 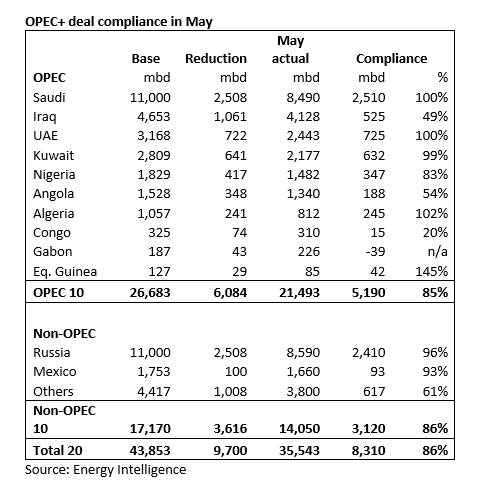 The other major issue is the impact that rising prices will have on competing crude producers – principally the US shale oil segment which has eaten away at OPEC’s market share but has also suffered badly as a result of the April price collapse.  The US EIA said last week that output was down to 11.2 mbd against the 13mbd that we saw in March.  With the price recovery (WTI is four times higher than it was in late April), there are now expectations that shale production could rise by up to 2 mbd by August as producers bring wells back onstream that were closed during the price collapse.  That said, although the short-term challenge is serious, in the medium-term shale output will probably come under downward pressure again as the spending cuts that the companies have been forced into by low prices and their high levels of debt impact their future drilling and production programmes.

Prices
Prices have recovered to more than $40/bbl after plumbing lows back in late April when the expiry of the May WTI contract during the Saudi-Russia price war briefly sent them negative.  Since then – initially on the back of production cuts by OPEC+ and non-OPEC countries but latterly driven by the reopening of national economies - they have been on an uptrend: over the past week Brent is up $5/bbl and WTI $4.35/bbl on expectations that the agreement would be extended, at least into July (although the idling of more than 0.6 mbd of USGC production because of a hurricane also played a role).  The price rises themselves of course also encouraged the producers to maintain their discipline because the cuts are having the desired effect.

In a telling sign, Saudi Arabia raised its Official Selling Prices with crude sales to Asia seeing the largest increases ($6.10/bbl for the benchmark Arab Light grade, the largest increase in twenty years) and eliminating virtually all of the discounts offered when prices collapsed during the price war as demand from China has recovered.

There’s a fine balance to be struck.  On the one hand the OPEC+ producers want to earn more per barrel for their output and production cuts are the way to achieve that aim.  However, if prices rise too far or too fast it will encourage OPEC+’s US competitors in the shale sector to reopen wells and restore production in a better pricing environment.  If prices were to go too much higher, the US is unlikely to be happy given that it’s an election year and, while the shale sector is important, so is the rest of the economy that needs reasonably-priced energy.  OPEC+ continues to walk a tightrope between supply and demand but without too much real-time visibility on what’s actually happening on the ground.  My colleague at the OIES Bassam Fattouh has noted that the environment is one of extreme uncertainty and OPEC+ “needs to be proactive and retain flexibility”.

The rest of 2020
Longer-term the picture is very uncertain and another OPEC+ meeting will be needed within a month to decide what to do about August onwards.  A lot will obviously depend on prices which will themselves depend on OPEC+ compliance with the production cuts, stock levels and how the world economy reopens – a second wave of the coronavirus forcing renewed lockdowns would adversely impact oil demand, while we see a steady recovery in China – with demand almost back to pre-Covid levels - and surprisingly good data on jobs from the US last week which both suggest a more positive outlook.

The latest IEA numbers (May Monthly Oil Report) suggest a 19.9 mbd decline in 2Q oil demand and an 8.7 mbd annual decline (OPEC has noted that it expects an annual decline of 9 mbd against last year’s demand of almost 100 mbd).  The OPEC+ agreement has a headline cut of 9.7 mbd but in May delivered 8.3 mbd.  The pressure will remain on the expanded cartel to maintain its output discipline and convince the non-OPEC producers that continued cooperation is in the interests of all producers.

Even ignoring the fact that this has proven very difficult to achieve in the past, that broad degree of cooperation is a significant challenge for OPEC and other producers to overcome.