China’s gas demand growth has risen steadily – and rapidly – in recent years. There was particularly strong growth in 2017 and 2018 as the government’s coal-to-gas switching programme drove demand higher. In 2019, however, it looks as if demand growth has eased significantly with some estimates suggesting that it has fallen below 10%. With much of the global gas industry focused on China’s demand growth, these changes have had knock-on effects on LNG and pipeline projects and volumes around the world.

Why has demand growth fallen from the previous high levels? The most obvious reason is that the levels of 2017 and 2018 were themselves unsustainable, driven as they were by a significant change in Chinese government policy focused on improving the environment in northern China, which had become a cause of serious social concern in the country. Coal burning was replaced at a very rapid – occasionally too rapid - pace by gas-fired boilers in an effort to improve the environment. Coupled with cold winters, this change drove gas consumption growth rates to record highs.

In 2019, and indeed going forward, there are new challenges for the gas sector in China.

One of the major challenges is that the market for gas use in power generation may be more limited than many have expected. We have long had concerns that the fuel’s underlying cost would preclude gas from achieving the same growth rate in the power sector as we have seen in the industrial sector. It now seems clear that structural and technical changes in China’s power sector will further constrain the use of gas in power.

The country’s coal-fired power fleet will continue to update its technology and improve its environmental operating performance through the period of the 14th Five-Year Plan (2021-2025). Chinese Premier Li Keqiang highlighted last October that coal would continue to dominate China’s energy mix and so coal development should be planned in a more environmentally responsible manner. The message was – to some degree at least – that coal was back because of the twin threats of a slowing economy and the renewed need for energy security. With China holding 13% of the world’s coal reserves, finding environmentally-acceptable ways of using those reserves has taken on increased importance. Thermal generation – overwhelmingly from coal – makes up 63% of China’s generating capacity while gas represents just 3%. Coal demand, however, having peaked in 2013 and then declined as part of the environmental clean-up efforts, rose again in 2017 and remained stable in 2018

The gas industry is very aware of this and understands the challenge from both clean coal – where Beijing has championed ultra-low emission coal technologies - and renewables. A senior executive at PetroChina highlighted the challenges at a recent conference, noting that China’s clean coal technology was world-leading and had managed to reduce emissions to below those of gas-fired generating plant. It now looks as if Chinese coal-burning power generating capacity will remain unchanged in absolute terms but will be modernized with larger and cleaner plants replacing some of the older, less-efficient and environmentally-damaging capacity. Additional capacity requirements are more likely to be met by renewable energy than by gas-fired plant based on the Chinese government’s policy document covering the energy supply sector to 2030. This preference is steadily becoming reality, with just 21% of new capacity under construction being thermal, against 36% for wind and 31% for hydro. PetroChina’s expectations for competition from renewables suggest that the cost of electricity generated by wind will fall from RMB 0.38/kWh last year to RMB 0.20-0.23/kWh by 2025, while the comparable figures for solar generation are RMB 0.38/kWh today to RMB 0.23-0.26/kWh in 2025 (we should note that there may be subsidies embedded in these costs but from the point of view of the generators, renewable energy is coming down in price all the time.

Overall China’s focus on decarbonisation means that it plans to rely mainly on clean energy to meet new electricity demand and non-fossil fuel capacity providing 50% of electricity supply by 2030. Industry observers have noted that solar and wind capacity is likely to grow at the expense of gas-fired power generation. Electricity demand grew by 8.5% according to the China Electricity Council, with renewables (solar and wind) representing 26% of the growth – a figure that is only set to rise in future years.

The outlook for gas in China’s power sector has fluctuated widely in recent years. In 2018 China’s NDRC predicted that power generation would be the biggest driver of Chinese gas demand growth to 2030. In 2019, however, the International Energy Agency is now forecasting that gas demand growth from the power sector will lag both the industrial and the residential/commercial sectors.

With the forecast growth in renewables outpacing overall electricity demand growth, coal-fired and gas-fired power generation are both going to suffer from falling demand. As we note above, gas-fired power is likely to suffer more because of its higher costs and the resulting preference of generators for cheaper feedstocks within the constraints of costs to the environment. 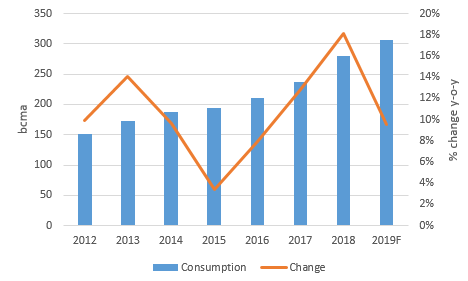