It has been clear for a while that the coronavirus posed a serious risk to the global economy. Yet the nature of this threat has changed dramatically. What looked like a temporary supply shock has morphed into a major deterioration in global demand. And the likely duration of this downturn is largely unknowable because it depends on the characteristics of the virus itself, which remain highly uncertain (will warmer weather slow it?). 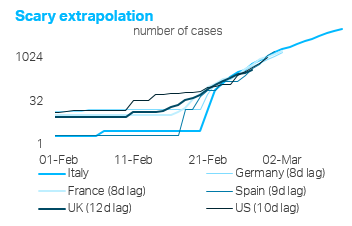 The problem now is not so much about the closure of China’s factories and the disruption this has caused to global supply chains (the big worry four weeks ago), but rather the impact of the fear (no longer irrational) that has gripped consumers and the health authorities across many parts of the world, causing a plunge in economic activity.

The spread of the virus beyond China has also been a game-changer for global financial markets. We warned last month that risk assets have a habit of ignoring these sorts of threats only to react in a ‘non-linear’ way once the danger becomes imminent. We have now entered the non-linear part of the reaction, with outright panic replacing extreme complacency. While nobody knows how many people the virus will infect, the economic consequences are already profound – the global economy is facing a serious recession. 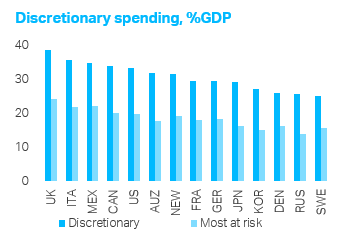 Though China’s factories are gradually reopening and supply chains are returning, it will prove much harder to ease the fear that has gripped the rest of the world – especially as the number of new coronavirus cases can only accelerate in the coming weeks. Infection rates outside of China continue to grow at exponential rates and the United States has only recently started to test for the illness on a meaningful scale, which means further scary headlines are inevitable. For now, of course, we do not have any hard data to evaluate the impact this crisis is having on consumer demand. But anecdotal evidence suggests it is severe, especially in those sectors that involve ‘social’ consumption – travel, tourism, restaurants, accommodation and certain professional services. 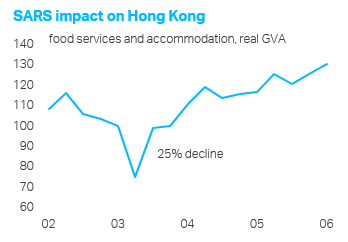 We can get a rough idea of the scope and magnitude of these short-term effects by looking at what happened during the SARS outbreak in 2003. Data for Hong Kong show an immediate plunge in activity of 10-25% in ‘social’ sectors, which produced a 2.5 per cent quarterly decline in GDP (10 annualized). It is possible we see a shock of similar magnitude in other major economies – which will start to show up in business surveys etc. over the coming weeks. But, unlike what happens during most recessions, this time we don’t really need to wait for confirmation. Usually the declines in output that occur early in a recession are subtle – most people won’t notice them in in terms of the activity around. This time we can literally see that some parts of the economy are experiencing a ‘sudden stop’. This hints at unusually sharp contraction (esp. for Italy!).

The impact of SARS was temporary, with activity bouncing back after just one quarter. The question now is whether the coronavirus demand hit will prove more persistent, perhaps even bringing the ‘end of the cycle’ people have been talking about for years. The persistence of the demand shock is likely to depend, not only on how the virus evolves, but also on the potential for second-round effects via labour and credit markets. If any near-term reduction in demand leads to widespread defaults or job losses it is unlikely to prove temporary.

On this basis there are some obvious vulnerabilities in the global financial system, including historically high corporate debt levels in a number of countries (especially among SMEs) and a dangerous international reliance on dollar funding. While policymakers can do little to cushion the short-term hit to the economy, they will try to mitigate these second-round effects. Central banks have room to cut interest rates modestly and channel liquidity into stressed sectors of the economy, but a prompt fiscal response is also inevitable.

Ultimately, governments will need to use their balance sheets, either by cutting taxes or increasing their spending, in order to replace the income that will be lost. But if the virus lingers, even this might not be sufficient to produce a quick rebound.