US growth and the Fed - after the Russian invasion

The short-term implications of the Russian invasion of Ukraine pales next to the longer-run consequences, but the world focuses on the short-term and so too does this note (with a coda on the long-run).

First off, Biden will not do anything in regard to sanctions that would negatively impact the US economy – and the same can be said of all the other nations involved. Aluminum sanctions are out, for that very reason, and Russia stays in the SWIFT system.

At the March FOMC meeting the Fed raises the funds rate 25bp rather than 50bp, primarily in reaction to the weaker equity market not a change in the base reason to raise rates – they are too low relative to economic activity. If, however, by mid-March, the overall market is down more than 10%, recent history (chart below) shows that the Fed will stop and/or reverse course – meaning no hike at all (there is no counter acceleration of Fed action if the market increases more than 10%).

Since the 1970s, oil prices have not been the primary elicitor of a change in monetary policy. It is hard to make any set rule about a price change regardless, because one always has to put the change into context. Is it a temporary exogenous hike, like today, or increases in line with growing economic activity. We see in the chart below that the Fed was raising rates along with gas prices from 2016 to 2019. 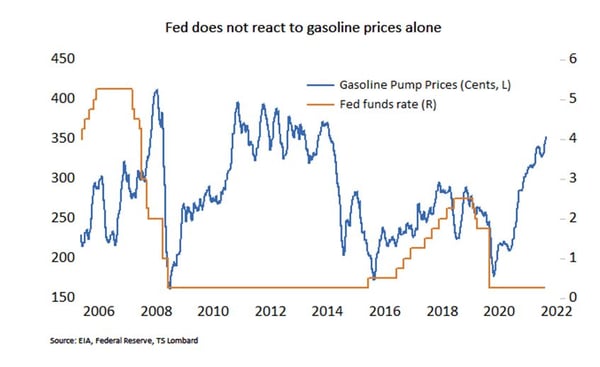 Does Ukraine change the direction or trajectory of Fed policy?  As it stands, Russia/Ukraine is only as big an impact on the US growth outlook as the equity market wants to make it. Higher oil prices have the potential to slow growth, but the unwinding of supply constraints (car production is ramping back up and this will probably take about 1% off of CPI this year), and slowing demand growth are far bigger forces than oil alone. I have long taken the view that the economy is transiting from Covid boom to an above trend pace with inflation settling into a 2.5%-3.0% range. The Fed is not going to push to get inflation back to 2%, they will call 2.5%-3.0% “job done” and that means a 2.5% funds rate as the “terminal rate”. However one slices it, the Fed is still far behind where rates should be given current and future economic activity. The equity market will determine the pace. Right now, the equity reaction to prospective Fed tightening and Russian's invasion have slowed the pace to 25bp in March and, if equity markets are stable, another 25bp in April and again in June (when QT is formally announced).

Is stagflation the new normal? Growth slowing while inflation remains high reflects a timing difference between coincident (growth) and lagging (inflation) indicators -- not a structural problem ala the 1970s. In the 1970s there was an inability of the supply side to react to price changes generated by upward shifts in demand for too many reasons to go through in this letter. There is, today, a potential for supply constraint in the oil area. The rise in real gasoline prices has not generated a similarly sized increase in the number of rigs pumping oil (chart below). One reason why, temporary I suspect, is that many of these drilling firms are happy to recoup past losses, paydown debt, and payoff shareholders. Longer run, many are reluctant to dig for a President who wants to shut them down and to make his point clear, has re-regulated the sector to hold down drilling activity. In the end, however, drilling activity will be resolved by that ancient bi play of fear and greed. The question is whether this price spike is temporary and where, if it is a spike, do prices settle.  Most drillers are reluctant to chase prices yet again (fear). If prices do stay high enough long enough, greed overtakes fear and drilling rig numbers will increase. Most believe US oil and natural gas output rises in the coming year and I agree. 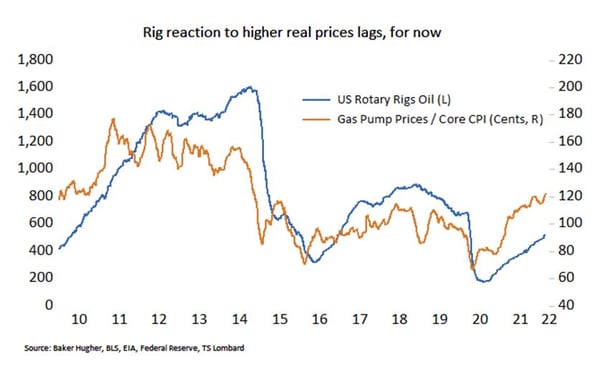 How much do oil prices matter to the economy? One would be hard pressed to tie the pattern of real economic growth to rising and falling energy prices, especially when we know so many other factors were at play in determining growth – the same as today (chart below) 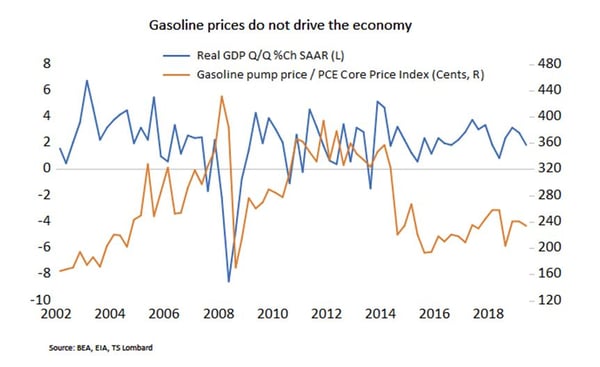 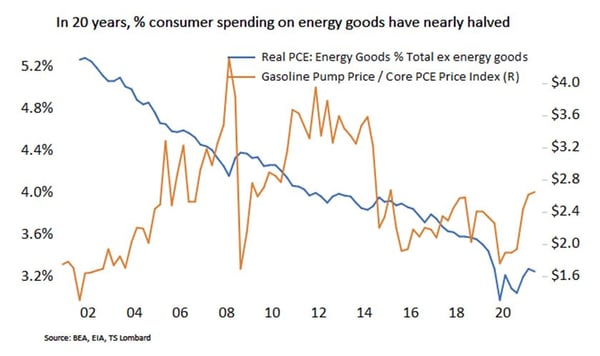 In the end, Russia/Ukraine will be seen as an event falling into our broader narrative that exogenous events would occur, help slow US growth and, in turn, tame the market’s hawkish central bank trajectory. I still see the funds rate a little over 1% a year from now, hardly confiscatory given the level of economic activity today and what I expect the economy to look like a year from now (2.8% real growth, 2.8% core inflation, 3.5% unemployment, 3.8% 10-year Treasury yield).

The longer-term implications of the Russian invasion is far greater than what happens to US inflation and growth in the near term because the initiative to set off major geopolitical shocks no longer belongs to the US alone -- nor can they be summarily ended by US action. US loss of control over the global narrative moves the nation from a pro-active to an uncertain reactive position. This, in turn, raises the risk of relying too heavily on global production processes for a number of economic and political reasons (losing assets in a hostile takeover that uses guns rather than paper). An accelerated reassessment of risk/reward is surely underway. The coming rearrangement of economic activity could permanently raise domestic inflation and lower equity multiples. This only one of a long list of probable impacts from the shift in US global position, which is what makes the long-run impact from this invasion much greater than how many basis points the Fed hikes at the March meeting.