Households $1.6tn in “excess” savings, inflation to take off?

Headline figures overestimate the “excess” savings that households have accumulated since the outbreak of the pandemic. To be sure, the personal saving rate will fall as consumers spend more of their disposable income on eating out, going to the theatre and on holidays, for example. But those expecting households to aggressively run down their stock of savings will be disappointed. There could be a burst of inflation in the immediate term, especially in the services sector, but it will be short-lived unless there is a meaningful improvement in the labour market. We focus on the US here, but these observations apply elsewhere too, especially in the UK and the euro area. 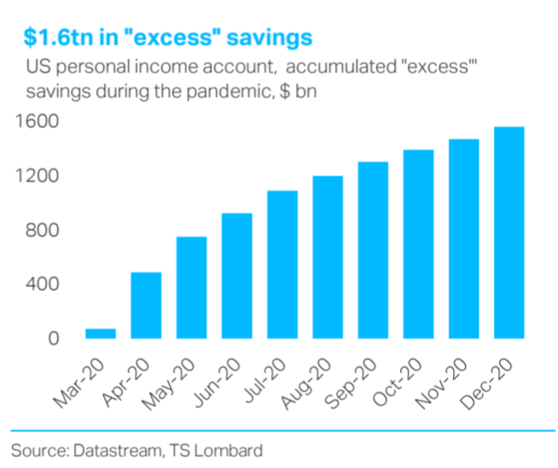 The personal saving rate in the US rose sharply to 34% in April 2020, the highest level since such monthly data became available in 1959. Generous government support and limited spending opportunities due to restrictions boosted savings. The rate has since fallen, but remains higher than the pre-pandemic level. Back-of-the-envelope calculations show that US households have accumulated $1.6tn in “excess” savings during the period March-December.

The distribution of savings is highly skewed towards higher-income households, which have a lower marginal propensity to consume.

Consumers are willing to spend only a fraction of their stimulus checks and unemployment insurance on consumption. According to a NY Fed Survey, 36% of stimulus checks given under the CARES Act were saved and 35% were used to pay down debt. The rest was used for consumption (26%) and for donations (3%). The share of savings was higher for those earning more. Consumers expect to increase their savings if they were to receive more checks. In sum, consumer spending on services will rise swiftly as households spend more of their income, not necessarily because they are running down their stock of savings.