What can policymakers do?

Two weeks ago everyone was working with the same assumption about the coronavirus. China would contain the virus reasonably quickly and gradually reopen its factories. There would be some disruption to global supply chains – car manufacturers, for example, might struggle to get certain parts - but the problems would be transitory. In fact, with the authorities in China increasingly determined to stimulate their economy, we could expect a powerful recovery into the summer. The problem with this analysis is that it was based on an assumption and with clear evidence the virus has spread across many other parts of the world, a new assumption has emerged - global pandemic. The truth, of course, is that nobody knows what will happen. We can’t even assign probabilities. This is true Knightian uncertainty. And if you have no idea what we face, it is natural to want to dump risk – the reaction we have seen in global markets.

Everything about this situation is unsettling. Even if the mortality rate of the virus is low, the severity of many cases could be enough to put huge pressure on public health services (if the infection spreads far enough.) It is understandable the authorities would want to prevent this by trying to contain the disease. But even if they didn't react in this way, we would naturally see people shy away from regular business and commerce. The demand effects are potentially huge and this is now the big economic story for markets – dwarfing the issues around supply disruption that were dominating the conversation two weeks ago. It doesn’t matter if Fiat or BMW can’t get a specific engine part, if nobody is prepared to enter their showrooms anyway. 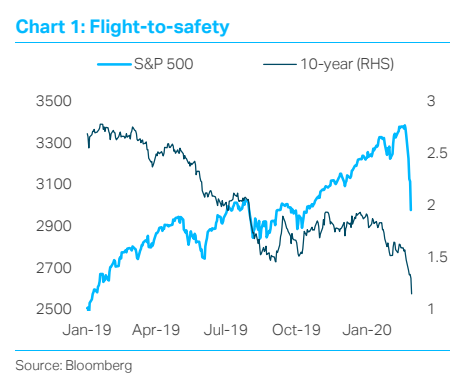 As markets plunge, investors naturally turn to central banks to come up with a solution. This response almost reflexive. Will the Fed cut interest rates? How about more QE? Central banks have already signalled a willingness to act (see Friday’s Fed statement) but must privately be wondering what this might achieve. The news flow of the coronavirus, over which they have no control, could remain negative for weeks. If they react quickly and stock markets keep going down, then what do they do? Perhaps it helps to identify the specific economic risks we face. Short term we are talking about a potentially large decline in spending. Some sectors will suffer a material drop in their income. While demand would eventually return, part of this income isn’t going to come back – especially for the service sector. You might postpone a car purchase by a few months, but you are not going to get ‘pent up’ demand for the 15 restaurant meals or 67 cups of Starbucks coffee you missed. For the developed economies this sort of discretionary spending can add up to a third of GDP, depending on what exactly we include. Cut this spending by 50 per cent and within a month we have lost one per cent of annual output.

There are two ways this plunge in spending could turn into something more persistent: (i) a credit crunch and/or (ii) major job losses (rising unemployment). If companies start to fire people, or cannot service their debts, even a temporary demand problem become an outright recession. And if these are the risks, monetary easing need to play a supportive role. Cutting interest rates helps to reduce debt servicing costs and might offset any tightening in financial conditions (depending on how financial markets respond – former Fed official Kevin Warsh argues a co-ordinated between the major central banks has the best odds of success). The fed clearly has more room to cut interest rates than the ECB or the BoJ, but perhaps these other central banks could step up their purchases of e.g. corporate debt. The BoJ is already buying equities, though this is trickier elsewhere. Crucially, central banks have keep defaults to a minimum by supporting the credit cycle and encouraging loan forbearance. If the central banks could deliver even a temporary calm in stock markets, this is worth trying. Of course, the actual effectiveness of these measures will depend on how long the panic lasts. There are good reasons to think the virus will slow with the warmer spring/summer weather – but this still seems a way off. 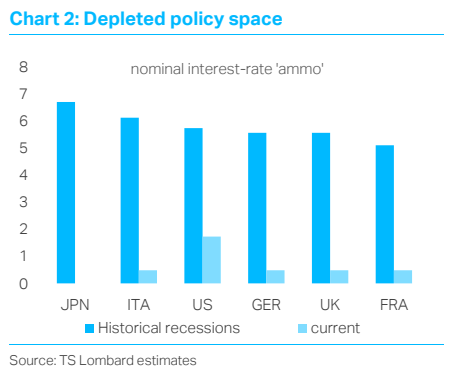 To really fight a recessionary outcome it is clear that governments – not central banks – will need to intervene and replace some of the lost income. Effectively, they must take part of the problem onto their own balance sheets. Global fiscal policy has been primed for months but the coronavirus could be the trigger for a much larger response. Hong Kong has already shown the way, with a scheme some economists are calling ‘helicopter money’ – though it is actually closer to a tax rebate. Italy is providing targeted programmes of tax relief and has now also announced a modest relaxation in its budgetary rules worth 0.2 %pts of GDP. Depending on how bad the situation becomes, which should expect to see much more of this sort of thing – even the Germans have flexibility for this sort of spending, seeing as it would clearly constitute an ‘emergency’. The problem with waiting for fiscal policy is that limiting the economic fallout through budgetary easing is unlikely to be the first priority of governments – understandably they will be more focused on protecting public health and trying to deal with the actual virus.

This leaves investors will a problem – what is going to turn the "delta" on this situation and give the impression things are actually improving (which is what we need for stock markets to stabilize)? With the drumbeat of negative coronavirus news set to continue, central banks and government have clearly got their work cut out. Global markets will remain highly volatile.