Equity market participants are putting banks in the performance penalty box, likely figuring on stressed balance sheets becoming problematic later this year. The equity market has it right, in our view. Comparing the equity market performance of small banks to large ones, we believe the difference does not reflect enough the greater risks at small banks (see first chart below). The S&P 1500 Regional Bank Index is about 28% above its 23 March low, the S&P 500 bank index (top 18) is 22% higher – the S&P 500 is 42% higher. The equity market shows marginally greater risk at small banks if we start the equity performance comparison on 31July 2019, when the Federal Reserve easing cycle began with the first 25bp cut in the fed funds rate. Since then, the S&P 500, after everything that has occurred, is nearly 7% higher, the large bank index is down 27%, but the small bank index is 33% lower. 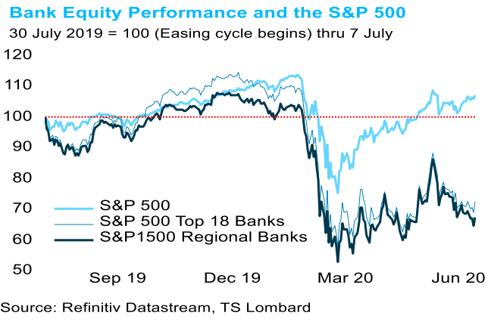 Bank assets have soared since the Covid-19 shutdowns began, but it is HQLA that has skyrocketed, essentially ballast against nonperforming loans. Because bank asset growth is not coming from loan creation, any inflationary impulse for the economy is absent. As illustrated in the chart below left, inflation picks up with a lag when bank loans grow faster than total assets. This is just another way of saying what we have been saying – when the Fed creates reserves ahead of deposits, the inflation is in financial assets not the prices of goods and services. There may yet be price inflation sometime in the future, if a mix of massive Federal spending and too low interest rates takes hold for an extended period, but between now and then, the banking system has a lot to contend with, and most specifically the small banks. Small banks, as defined by the Fed, are all but the top 25 banks.

Regulators, politicians, and pundits have been laser focused on preventing the big bank failures of 2008-09, but this cycle’s problems live among the small banks. We have been making this point for several years now, noting that small banks have ramped their lending and their borrowing of liabilities during the past eight years or so. In the chart below right we show how small bank loans have grown from 55% of large bank loans to over 75%. Borrowings to finance their expanding loan book have similarly risen, from 30% of large bank borrowing to over 50%. It is also important to consider that the credit quality of the commercial loan book has been declining since the 1970s, and commercial borrowers from small banks are more likely to be smaller with narrower sources of revenue.

The problem to come in this cycle is spiralling bankruptcies in commercial real estate, and small banks are particularly vulnerable to this outcome. In the chart above left, we show that some 35% of total loans and leases at small banks are in commercial real estate. The bulk of these loans are in non-farm non-residential buildings. Being that these are small banks doing the lending, we very much doubt the exposure is to skyscrapers in major cities, but in smaller office buildings and retail facilities. At the same time, the small bank ramp up in HQLA (which we roughly calculate as free reserves plus Treasury holdings) has been left wanting relative to their loan portfolio – from around 9% to 13% of total assets. To be clear, this is a high level, but probably not high enough. Small-bank HQLA hovered around 12% of total assets from 2010 until around 2015, after which banks began to reduce HQLA relative to assets as loan growth accelerated. In contrast, HQLA at large banks has recently risen to around 21% from 14%, while their exposure to commercial real estate is around 10% of total loans and leases (see chart above right).

It is consequently relatively easy to understand how small bank failures could grow into a major story later this year – unless coming legislation works to backstop to commercial real estate distress. There does not appear to be anything coming in that regard, but we will know at month’s end. Likely accelerating small bank’s real estate problems is that the latest round of the virus’ surge is occurring in states and regions where smaller banks predominate. Listening to the Fed and their Congressional overseers, the focus remains on keeping big banks whole. The small bank problem looks set to sneak up on them and the regulators – at least publicly.

In the end, there will be fewer small banks, and regional credit demands will increasingly depend on the nation’s largest banks. While the current path to this outcome is not one the Fed would ever choose, the outcome is probably more welcome by the Fed than not. After the long ban on interstate branch banking in the US ended, the nation found itself left with too many banks. The Fed believes national banks can deliver better services to local business than small local banks. The rapid growth in internet banking (Goldman Sachs is a lead example) is also making a physical bank presence increasingly less valid. The small local bank may very well be heading in the direction of the small family farm. Expect Congressional push back on this trend.