One year into the pandemic, still enduring tough restrictions on social life, entertainment activities, and leisure travel, we bet most people crave a long holiday. With the acceleration in the vaccine rollout, especially in DMs, and the synchronised reopening of most economies in 2021H2, the tourism industry – the greatest pandemic loser – will no doubt rebound strongly from quasi-annihilation. Investors looking for value stocks have taken notice.

However, the industry’s prospects remain clouded by unknowns and downside risks. While it’s still too early to know if Covid-19 will have a lasting impact on people’s preferences about international travel for leisure, significant obstacles to cross-border tourism are likely to remain in place at least through this summer. The chief reasons are: (i) the risk of new dangerous virus mutations before herd immunity thresholds are met beyond the US, the UK, Israel and the Gulf states; and (ii) governments’ attempt to capture some pent-up demand for the domestic tourism sector. Consistent with all this, high-frequency indicators show that people are timidly starting to book hotel rooms again, but close to home, as the improvement is not reflected in international flight bookings (Chart 1).

Moreover, the recovery will be uneven depending on three main factors:

Europe is in a particularly bad spot. In the EU only about 10% of the population has received at least one dose of vaccine versus 43% and 25% in the UK and the US, respectively, while the pace of daily vaccinations is only up by one-third in the EU relative to last month as opposed to two-thirds in the US and the UK. Although we do expect EU countries to accelerate inoculations in Q2 thanks to improved distribution logistics and fewer supply issues, the cost of the delay is new virulent waves like the one that several EU countries are facing right now, which precipitate tougher mobility restrictions and undermine tourists’ confidence in safe cross-border travel.

Exposure to EU tourists is risky this year. On the one hand, international tourism and travel in EU countries accounts for a large share of GDP (Chart 2), on the other hand, consistent with touristic flows’ gravity models, the vast majority of inbound tourists come from inside the EU itself (Chart 3). Crucially, in the fragile Southern European economies such as Greece, Portugal, Spain and Italy, where international tourism contributes between 7% and 15% of GDP, EU international arrivals represent between 65% and 80% of the total. Beyond the EU borders, large exposure to EU tourists could also be a problem for the UK and Turkey, even if partly offset by an increase in Australian and Russian tourists, respectively. Elsewhere (e.g. S.E. Asia), EU tourists account for a smaller share of arrivals, but this understates their importance as relatively high spenders.

Don’t count on Chinese tourists either. Alongside the EU, China is also a key source market for the global tourism industry. But, as shown by the clampdown on interprovincial travel around the Chinese New Year, the authorities there are likely to remain cautious, encouraging domestic tourism while keeping restrictions on international travel. This implies a big hit to Asian tourism (Chart 3), and in particular to S.E. Asian tourism-dependent economies like Thailand – now fighting against time to reopen the resort island of Phuket to vaccinated tourists by July 1, while cutting estimates of tourist arrivals further below last year’s figure. But Europe will miss Chinese tourists too, as in the past decade they have become critical to the sector’s growth.

Mitigating factors: vaccinated US and UK travellers, and stronger domestic tourism. Mexico may turn out to be a winner this summer, as many vaccinated Americans flock to Cancun and Acapulco (Chart 3). Similarly, large exposure to British tourism in the EU, mainly in Spain and Greece, should prove positive (if the current UK foreign holiday ban is lifted). In general, however, countries with already large domestic tourism industries but traditionally high levels of outbound tourists such as the US, the UK and Germany, stand to benefit most (or rather to lose out least) from the combination of reduced international travel and pent-up demand for services.

"With limited tourism activity, some scarring would be inevitable" 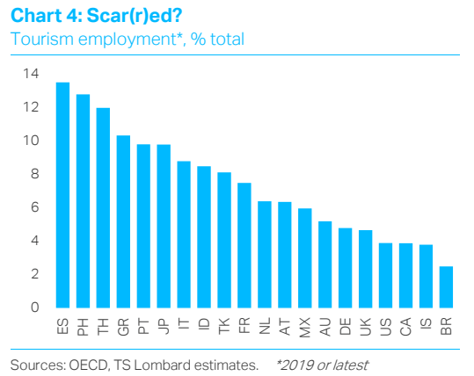 To sum up, a tourism rebound will accompany the reopening of the global economy in Q3. Mexico is best positioned to benefit from the already growing US demand for holidays, but the likely absence of Chinese and EU tourists risks making some ‘scarring’ in Southern Europe, S. E. Asia and Turkey inevitable. The way to avoid this is vaccine passports. The EU has a proposal on the table and it’s essential to make progress if the Mediterranean summer is to be saved.