Second wave does not change our positive Korean economy, equity, or FX position. Since April, we picked Korea as a relative outperformer due to three core factors:

I arrived in Seoul with my family 10 days ago and have now almost finished the two week self-isolation period. Both government enforcement and public compliance with covid related restrictions are substantially greater than what I experienced in the UK. This reinforces our view on virus containment success. Indicating that the duration of the second wave will be short by international standards but with an outsized economic impact while mobility restrictions are in force.

The ongoing second wave outbreak evidently strikes at the core driver for outperformance: virus containment. However, we maintain that the country’s robust track and trace system, in addition to strong public buy-in will see new confirmed cases trend down over the next two-four weeks. Korea should still outperform almost all DM and EM economies. 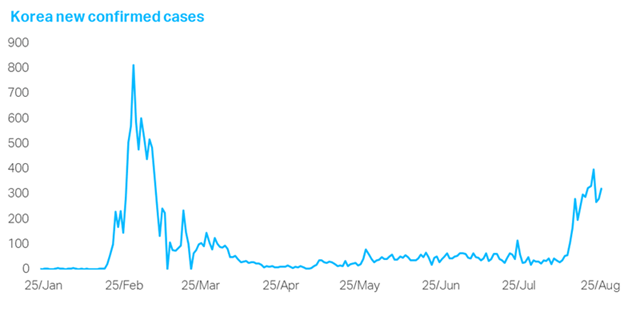 Virus numbers will get worse. The current outbreak is already harder to control than Korea’s first wave. In contrast to the February infection cluster centered in Daegu, the new outbreak is in Seoul, the country’s economic, political and transport hub. The capital city plus commuter belt contains just under half Korea’s total population. Track and tracing is many orders of magnitude more difficult than for the February outbreak (a city about 4% the size of Seoul).

Given the containment difficulties, it is likely that President Moon will raise mobility restrictions to level three, the most stringent, in the next week. This may trigger another sell-off in KOSPI and KRW, in a similar manner to the 5% Kospi fall last week – but it is notable that KRW has already recovered from its dip.

Level 2 - Indoor meetings of more than 50 people and open-air gatherings of over 100 people are banned. So-called risk-prone facilities, including karaoke rooms, clubs, PC cafes and buffets, have been ordered to shut down.
Level 3 - All meetings of 10 people or more banned and all students go offline classes.

Daily new case numbers are low by international standards, hovering around the 400 mark. Officials are concerned over the number of new unconnected cases. Nevertheless, it appears that Seoul’s’ widely publicized success in containing its first outbreak, helped cause something of an overreaction to the second wave. Second waves are an inevitable part of COVID normalization and Seoul has the means to control this outbreak. 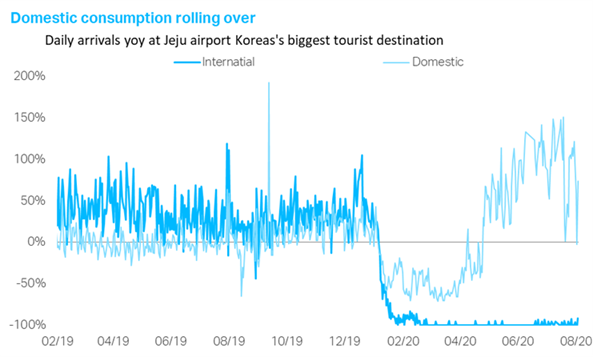 The economy will take a hit through September and October. The usual covid risk sectors; tourism, retail and restaurants will suffer the most. Domestic consumption, which had staged a strong recovery, is already rolling over. People are genuinely concerned and have ended up over-complying with government restrictions meaning the country is already close to level 3 mobility restrictions.

A sharp drop in consumption will be partially offset by continued improvements in exports, manufacturing and investment, driven by improving external demand and rising government spending. President Moon is preparing additional fiscal response measures, including a second cash handout of around $600-700 (something that even newly arrived foreigners can access) and expanded employment-creating measures. The BoK slashed its growth forecast today, and will expand its ad-hoc bond purchase program to facilitate fiscal spending. Governor Lee kept a rate cut on the table should the economy materially worsen.

Markets have stabilised after a near 6% drop in the past week. Further downside risk remains as virus cases mount and Seoul increases mobility restrictions. However, we think any drawdown is likely to be temporary blip before Korea’s outperformance resumes.