On the road in India with protesting farmers

The farmers remain determined despite protracted protests. At the farmers’ protest site at Ghazipur on Delhi’s eastern border with Uttar Pradesh, the atmosphere had been determined and upbeat when I visited 2 weeks ago. Hundreds of farmers had camped in tents surrounded by their tractors and trailers. They included religious Sikhs from Punjab, wizened Jat (a regional agricultural caste) farmers from Haryana and Uttar Pradesh sitting on narrow beds puffing hookahs, Marxists distributing radical books and pamphlets, Buddhist monks, army veterans in uniform wearing medals and even the occasional Hindu nationalist who supported Prime Minister Narendra Modi but opposed the farm laws.

Volunteer groups and charities distributed blankets and warm clothes to help protestors withstand a cold Delhi winter, and set up community kitchens for protestors and visitors. But there was order in the seeming chaos, and the camp had been systematically divided among the various protesting groups. 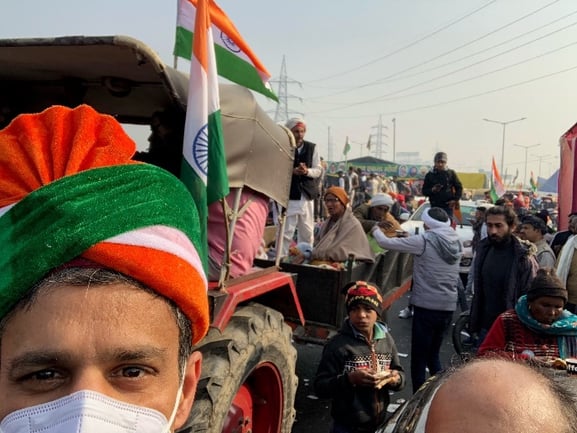 The government’s offer to suspend the legislation has been rejected. Following more than 10 rounds of fruitless negotiations, during which the farm groups rejected a government offer to suspend the farm reforms for 18 months — demanding total repeal instead — the farmers announced a tractor rally on 26 January, India’s Republic Day. This posed a direct challenge to the authority of the Modi government; Republic Day is a day of unity and national celebration with a widely-watched military and cultural parade. The protestors’ parallel tractor parade signalled an alternative legitimacy.

Farmers fear the reforms will favour large corporate buyers. The farmers were protesting the three new farm bills that the Modi government had passed in September 2020. The bills permit them to sell their produce to whomever they wish, rather than in designated markets. The government claimed that the measures would help raise farmers’ incomes. Despite government denials, many farmers fear that the reforms will end the state procurement of food grains at guaranteed prices and leave them at the mercy of large corporate buyers. In November 2020, tens of thousands of farmers congregating at Delhi’s borders demanding that the government repeal the bills.

The mood of the protests changed on 26 January. When I returned to the protest site on 26 January, the atmosphere was buoyant, with hundreds of tractors lined up to drive through a route that had been agreed on with the police. The majority of farmers seemed satisfied to follow the official route, with speakers blaring patriotic songs and elderly farmers seated on tractor-trailers. One group even shared its trailer with two dressed-up bullocks. But there was challenge in the air too. Three men in a trailer stood with nooses around their heads, re-enacting the hanging of freedom fighter Bhagat Singh and his compatriots, implying that they saw the Modi government as little different from the oppressive British Raj. Posters displayed the names and photos of the scores of farmers who died during the two-month long protests. And as I walked in, I saw a few young farmers rashly driving their tractors on an empty highway towards police lines that blocked their path to Delhi in what were mock-charges that presaged trouble.

The tension exploded later in that day as a group of farmers forced its way through police barricades guarding the Delhi borders, reaching the historic Red Fort where every Independence Day, the prime minister of India raises the national flag and gives a speech. A group of Sikh activists raised the flag of Sikhism on a flagpole, another direct challenge to the Hindu nationalist Modi government. The ensuing violence, in which one farmer died and dozens of farmers and policemen were injured, caused citywide traffic jams and polarized opinion. This gave the ruling party a fresh opportunity to label the protestors as dupes of radical separatist Sikhs and “anti-nationals”.

As of writing, the movement is at a crossroads, and two of the several dozen farm groups have announced that they are leaving the movement because of the violence. Meanwhile other leaders have accused agents-provocateur of fomenting the strife. But the opposition to the agricultural reforms among farmers is unlikely to diminish.

Opinion polls show that the ruling Bharatiya Janata Party would be comfortably re-elected if an election were to be held today. However, the same polls show that many voters are sympathetic to the farmers and want the government to reach an amicable compromise on the farm laws, either by repealing or amending the reform acts.

The recent violence will encourage the government to take a hard line as it did with the citizenship protests. It is likely to try and divide the various groups and to discredit the farmer movement. We expect the full force of state power to be wielded against agitating farmers, producing political volatility. But an extended confrontation with farmer groups could cause national turmoil for three reasons:

Despite its brute Lok Sabha (lower house) majority — and even arguably because of it — the Modi government is experiencing increasing street resistance to its initiatives. The farmer movement is the second street mobilization within two years.

The good news for investors is that the government’s farm law troubles will increase the pressure on it for major initiatives on other fronts, in particular, the accelerated privatization of state-owned enterprises. However, this also means that the government will have to confront India’s public sector trade unions, an additional source of political volatility in 2021.

A more challenging political environment means not only that fiscal consolidation is unlikely but that the government is likely to further open its purse strings. Spending on Covid-19 vaccines, income support for the poor, bank recapitalization and defence purchases – following the border standoff with China – will keep spending elevated. And this could have consequences for inflation and financial stability.