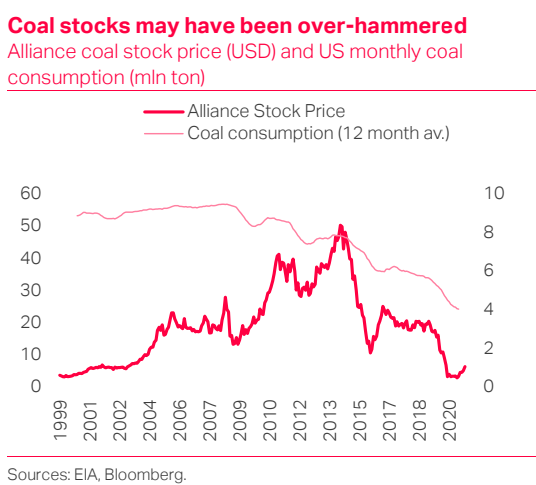 US coal demand may be in terminal decline, but that does not mean that coal prices are in terminal decline. Our historical analysis of coal decline produces an interesting side note: structural demand destruction does not necessarily mean falling prices, it can even mean the opposite. The undead stage of coal is all about keeping an industry alive that everyone knows is on its way to terminal decline. This makes investment in new capacity very rare, creating both a long-term trend of declining supply and a higher chance of random, short-term, supply outages as existing capacity ages and fails. At the same time, government policy guarantees consistent (if low) demand. The obvious result is frequent mismatches in supply and demand, leading to volatile and sometimes high prices. These high prices in turn contribute to further demand destruction in those parts of the economy not compelled by the state to buy coal, further constricting investment.

Appalachian coal stocks will behave like tobacco stocks: throwing off cash by being freed from any imperative to invest in new capacity. The industry itself understands that the writing is on the wall and freed from any necessity to invest in new capacity, should be able to funnel more money into profits and dividends – a perverse advantage of approaching doom. Diversified equity investors are no stranger to this dynamic, the classic example is that of tobacco companies, which face a near certain collapse in demand within the coming decades but act as dividend stars in the meantime. The share prices of Appalachian coal companies such as Alliance Coal have been hammered in the rapid decline stage (see chart). In the coming years however, these Appalachian coal companies will be ideally placed to lobby for subsidies – especially the state level subsidies being proposed in places like West Virginia. None of this points to real equity value creation: but it should certainly focus attention on attractively discounted dividend and coupon streams.

Benefiting from the transition subsidies will be a hard game to play – investors would need to invest in the coal communities more than the coal industry. Given the high probability that Democratic politicians, and even the public in general, will prevent the coal industry from capturing the transition subsidies. Direct investment in the coal industry therefore risks missing the tailwind of this political driver. Investors who are interested will instead need to think about ways of getting exposure to coal community regeneration. A plausible play, for example would be industrial REITs with assets in coal country, STAG for example; but for more targeted exposure, only local knowledge will illuminate the opportunities.