“Where might be the catch?” This question about the prospects for the vaccine route to suppressing the pandemic arises naturally from financial markets’ acclamation of last Monday’s Pfizer/BioNTech announcement.

Before reviewing the various potential pitfalls, I would start by highlighting another important positive point overshadowed by the publication of the very encouraging interim efficacy analysis of the BioNTech/Pfizer candidate. This is that there are nine other vaccine candidates in advanced Phase III trials, with 37 more moving through earlier clinical stages. The importance of there being such a good number of serious candidates is the insurance that this offers in case the efficacy of the BioNTech/Pfizer candidate of over 90% after seven days were to decline for some reason over longer periods. Most of the ten leading candidates look set to have been authorized, and mass deployment initiated, by early next year. It seems reasonable to suppose that the inevitable setbacks and bottlenecks, even if they prove insurmountable in some cases, will not affect all these candidates equally – with the most successful among them breaking through to make a rapid and material contribution to virus suppression.

Confidence on this point about the reassuringly deep bench of vaccines stems also from the geographical diversity of the Phase III trialists. As shown in the table above, this diversity straddles the world’s neo-Cold War fractures – a point that should also facilitate deployment in the developing world in a positive-sum ‘soft power’ competition. Returning to the important question of vaccine efficacy, the desirable diversity among the leading candidates also extends to the wide range of technologies underlying those ten leaders alone. While the Chinese candidates use the traditional technique of a deactivated version of the SARS-CoV-2 pathogen itself, the others span platforms based on neutral viral ‘vectors’ (UK and Russia) and protein synthesis – including the “messenger RNA” technology used by BioNTech/Pfizer.

Turning to the plausible hazards (i.e. leaving aside complete imponderables, such as safety shocks), the key point is that financial markets are likely to ‘look through’ all of them as and when they materialize. The list of difficulties starts with production bottlenecks causing uneven deployment, even in and between rich countries, whose public health administrations may also struggle with the logistical challenge of deployment on the massive scale that is required and the public will demand. To put that scale challenge into perspective, the routine vaccination experience of the UK is limited to 14 million people (a fifth of the population) receiving a free annual one-shot flu jab – corresponding to a take-up rate of about 75% among over-65s, and 50% among other eligible vulnerable groups.

The list continues with the other side of the ‘public demand’ coin: ‘anti-vaxxer’ sentiment has been rife in several developed countries since the 1990s. A worldwide 19-country survey of 13,426 people published last month in Nature Medicine found that 71.5% of respondents overall would take a readily available Covid-19 vaccine (that is, by definition, a vaccine that had satisfied regulators’ safety and efficacy requirements). Combined with this possible 30% of people refusing the vaccine, the inevitable shortfalls from 100% efficacy could well reduce the aggregate immunity effect below the consensus 60% threshold for achieving herd immunity.

The most formidable brake on progress along the vaccine route to the pandemic exit door may lie in the time needed to build clinical evidence on the immune reaction – including its strength and length, and variations by age and health profiles. Settled answers to associated questions such as the number and spacing of doses, and any necessary boosters, will require the evidence of months or years.

All the hazards discussed so far point to the risk of persistent infection clusters during the period of vaccine deployment – which means at least all of next year and, outside the OECD area, probably well beyond 2021. The resulting spoke in the wheels of economic recovery could be strengthened by behavioural factors.

Alongside the likelihood of markets ignoring all such problems, and instead discounting the end of the pandemic, we would add another key point that could well affect relative performance. The discovery of (most likely) several effective vaccines offers an opportunity for countries that have under-performed so far in managing their epidemics to catch up. The UK looks like a good example – and perhaps a particularly relevant one for asset allocators given the beaten-down valuations of its assets and depreciated currency. It will have a good starting point as regards vaccine availability, having already pre-purchased 40 million doses of the BioNTech/Pfizer vaccine, with likely capacity of its ‘own’ promising Oxford/AstraZeneca candidate reaching around 100 million doses next year. As for anti-vaxxer sentiment, the finding for the UK in the above-mentioned Nature survey is right on the global average (see chart below) – so no particular threat there.

The other vaccine-related driver of relative performance besides this catch-up factor is the possibility of large differences between countries in the speed and quality of vaccine roll-outs. Chance will play a part here – in particular, countries’ health systems will be choosing which vaccine(s) to use before any definitive evidence on their relative effectiveness is available. 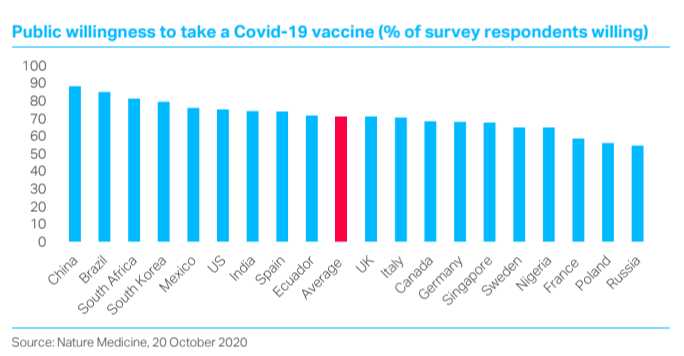 A final key differentiating factor revolves around the importance of continuing enhancement of general epidemic management alongside vaccine deployments. The importance of this parallel effort stems from the virtual inevitability of new infection clusters arising from the various difficulties to be expected along the vaccine path. The most successful countries from now (the ones catching up most quickly with East Asia) will be those that not only maintain necessary social distancing but also manage to improve the pandemic control/economic recovery trade-off by rolling out testing on a very much larger scale than seen until now – ideally covering whole populations. As it happens, the UK is also a good example in this area – that is, a general catch-up candidate where policy has become particularly focused on such mass testing.