The cycle of shutdown and reopening impacted the monthly change for durable goods , but with the July increase the sum of these monthly changes YTD is now back on track with year ago levels. From here on out, the pace of new orders will reflect underlying growth of the economy rather than making back what was lost when the economy was closed from mid-March to mid-April. We show that in the chart below. We exclude civilian aircraft from our calculations because it is a damaged industry to say the least, with negative new orders in June (-$10.5bn) and July (-$5.8bn), seasonally adjusted. This is an important industry for the US economy and a key driver of exports, so we are not looking to minimize its importance, but our aim is to illustrate how the broader economy is faring. 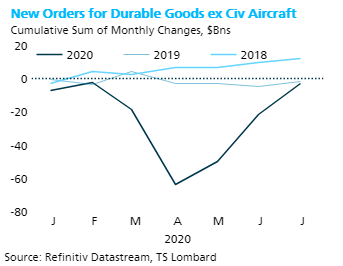 The inventory overhang (ex aircraft) created by the mandated collapse in sales also weighs on the outlook, and here the news is similar to new orders. Between the sharp rebound in sales as operations reopened and the work down of unwanted inventory, the ratio is back where it was pre-shutdown (see chart below). Whether firms rebuild inventory from here will now depend more on their outlook for sales, etc., than an adjustment to what has gone on before. The current episode is nothing like a regular recession, such as 2008-09, but with that caveat, we show that the three-month rate-of-change for inventory did not turn positive until January 2010, basically six months after the recession ended. 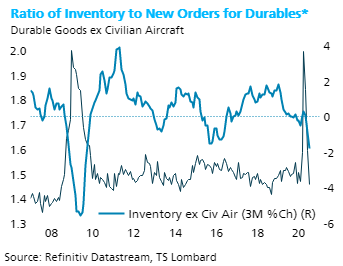 Our forecast is that the first shock wave from the virus, the mandated closing and reopening, has just about worked its way through the manufacturing part of the economy (aside from aircraft). What is to come is recognition that the virus will have a permanent impact and, following that, the “creative destruction” that marks a recession is still to come. Whether this manifests in a negative GDP growth quarter remains to be seen, but our forecast at present does not assume another down quarter for growth. We do, however, expect a slower pace of new orders for durables, except perhaps for computers and electronic products, and a cautious approach to inventory.