Supply stops US production, but that's not the stagnation story

Global supply constraints reversed US production growth in September; excess global supply has stagnated US production. Current constraints will ease, and so too related price hikes, as transportation and production bottlenecks unsnarl. Further, still very low inventory/sales ratios promise strong production growth in coming quarters. But beyond this constrained and convoluted recovery lies the critical issue of the impact on the US from the unlikely return of pre-Covid global organization of production processes. Inventory rules are shifting from “just-in-time” to “just-in-case” and this, plus carbon-footprint concerns, are likely to shorten distances from production to market. While I believe the US benefits from this shift, this is not an assured outcome. If the US does not, then production stagnation returns, without inflation – the tenor of the US economy that Biden, and Trump before him, have been working to change.

It is, however, problematic that US-based producers are today holding back from producing more (e.g., oil and steel) despite high prices. Among the reasons are uncertainty about demand in 2022 (will 2021 price hikes stick?), labour shortages (most acute in manufacturing) and the unknown course of “green” regulations. Some of this uncertainty should dissipate in due time and allow for capacity utilization to rise. Also on the plus side, is proposed infrastructure spending and tightened domestic content rules.

All of which leaves the Fed betwixt and between --none of the above reflects a monetary inflation. Higher interest rates imposed by the Fed do not reopen productive capacity. In fact, by ramping up the dollar with aggressive rate hikes, import prices and domestic inflation fall off but at the cost of stagnating the domestic goods industry. With this in mind, and our view that global supply/demand imbalances unwind and cause disinflation to return to market concerns, we hold to our view that the Fed tapers in November but holds back on hiking rates until the end of 2022.

Industrial production dropped 1.3% m/m in September and was down 0.7% for manufacturing production, and supply shortages were greatly to blame. The impact of the chip shortage is most acute in the auto industry, and we see this writ large in Chart 1.

Rock-bottom inventory/sales ratios imply sustained future production, here and abroad, if stock on the shelves is to be restored – unless sales fall away. Pretty much all consumer goods sold in the US are imported or contain imported components to be assembled in the US. Therefore, to raise these ratios (Chart 2) expect continued pressure on global supply chains to perform, including productive capacity in the US and elsewhere. Given how the current supply shock has upset production and delivery dynamics, firms are raising their target inventory/sales ratios to reflect just-in-case scenarios rather than just-in-time. This would notably reverse the long slide in the inventory/sales ratio of, for example, retail ex autos.

Higher prices should increase production, or so we learned in Econ 101, but that is not necessarily true today – steel and oil production are standout examples (Charts 3 and 4). The reasons why are many, including a lack of clarity on forthcoming “green” regulations and a shortage of skilled labour, but we suspect the main reason is confidence that current prices are indeed transitory. If there is one argument underpinning the Fed staff’s view that current inflation dissipates in 2022 as supply/demand imbalances are worked out, is the reluctance of producers to chase prices by expanding production. 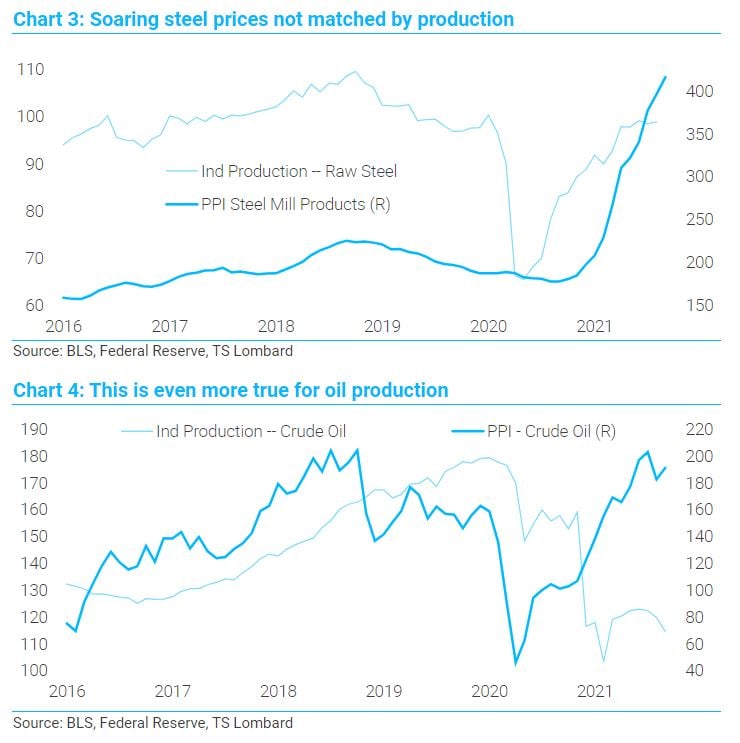 Judging by the ratio of job openings to hiring by industry, there is some truth to the inability of manufacturing firms to fill positions. While this ratio is high for most industries, the problem is especially acute when it comes to hiring people to make things (Chart 5). There are many reasons why, but to keep this blog post from turning into War & Peace, I will take up the labour story at another time.

Government policy is aimed at ending the stagnation of production in the US, thus making current reluctance to react to higher prices concerning – and hopefully proves to be passing. Manufacturing production excluding hi-tech, and autos is 14% below its 2007 high and 11% below its 2000 high (Chart 6). It is true that hi-tech and auto production have fared better, but as illustrated in Chart 7, but the weights of these indexes show that manufacturing is by far the most important driver of overall manufacturing production. Longer run stagnation of production is the critical problem for the US economy, not current dislocations clogging the flow of goods to market. The negative impact of stagnation is evident throughout the economy, including categories of employment growth, downward mobility of living standards, and the greater skew in income distribution. 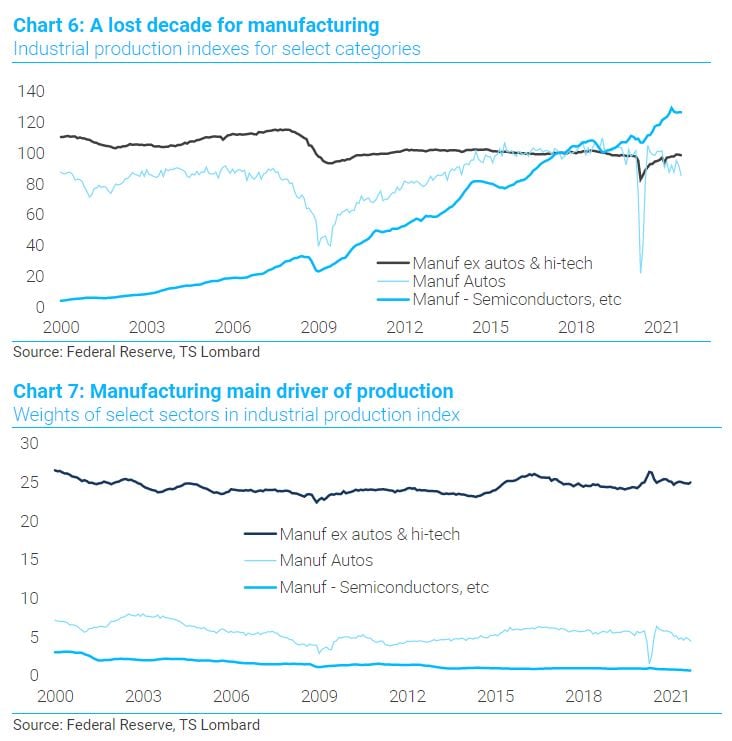 In sum, current production issues will eventually sort themselves and so too will prices. That US firms are not chasing prices with increased production is testament to high uncertainty as to whether 2021 prices will stick in 2022. While there is reason enough to believe current inflation is passing, reasons not to expand such as labour shortages and a lack of clarity around coming green regulations, are more problematic because they can persist beyond the current disruption of activity. My expectation is that after current bottlenecks are cleared and inventory/sales ratios restored, the global order of production processes will be reset as firms move to “just-in-case” inventory strategies and carbon-footprint concerns move production closer to final markets. It is therefore critical, given the aim of Biden and Trump administrations to restore domestic production and build back middle-income employment, that the US benefits from the resetting of global production supply chains. Where the Fed sits in all this is as bystander, as none of this is a monetary problem. It could be if the Fed drops its AIT promise and returns to an aggressive rate-setting policy that strengthens the dollar and limits inflation, but at the cost of damaging domestic goods production. For that reason, I expect the Fed to taper in November but wait a year before following with a hike in the funds rate.