Chancellor Rishi Sunak has vowed to “balance the books”, yet pressure to keep the fiscal taps loose is unlikely to let up anytime soon. The government’s backstops have put a floor under the economy, but as the mid-year reflex rebound fizzles out, the spotlight is fast moving to corporate profits. As the economic scarring caused by the pandemic becomes clearer, it is the extent and speed at which businesses’ liquidity needs turn into solvency problems that will dictate the path of aggregate demand over the coming quarters.

The extension of loan support schemes throws a lifeline to SMEs, but it also comes at a cost. For most businesses, taking on additional debt against the backdrop of a challenging operating environment merely postpones the risk of distress, keeping a lid on confidence and spending. The jury is still out on whether and when government stimulus can gain reflationary traction, providing the bridge to a lasting recovery.

The bottoming-out in vacancies suggests that the labour market may be over the worst. But given that the claimant count remains elevated at over 2.7 million, it is by no means anywhere near out of the woods yet. Early indicators suggest the number of employees on payroll fell by another 35k in August, extending the decline since March to 695k, or 2.4%.

The good news is that the number of furloughed workers has continued to decline in tandem with the reopening of the economy, while the new Job Support Scheme will ensure that the labour market does not fall off a cliff when the Job Retention Scheme expires at the end of October. The bigger question, however, is whether those returning to employment will be able to keep their jobs, and for how long. As businesses come to terms with a highly challenging operating environment, the risk is that redundancies will accelerate, acting as a drag on consumer sentiment and spending.

Flow-of-funds analysis captures the challenge facing policymakers well. The sectoral financial rebalancing achieved post-2016 is unwinding rapidly, as the economic blow from the pandemic has caused the private sector to hunker down. Until confidence improves and demand turns the corner, it is fiscal policy that will need to shoulder the burden of adjustment. 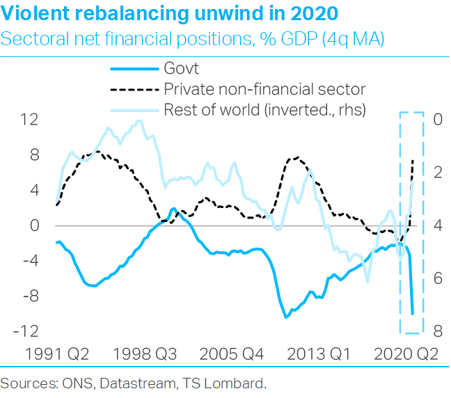 The budget deficit is on course to rise above one-sixth of GDP in the current fiscal year, dwarfing the previous record set in FY 2010/11. The Debt Management Office has planned £110bn of gilt issuance between September and November, which will take the total since April to £385bn. The combination of soaring gilt supply and shrinking GDP means that the public-sector net debt-to-GDP ratio will finish FY 2020/21 comfortably above 100% for the first time since the early 1960s.

These are certainly not the sort of numbers Rishi Sunak had in mind a few months ago when he delivered his first Spring Budget, in which he made it clear that the government’s aim was no longer to bring the debt ratio down over time but only to keep it stable – a fundamental departure from the post-GFC approach to public finances.

The Chancellor now vows to get borrowing and debt “back under control over the medium term”, well aware that rising debt increases the sensitivity of the public finances to higher interest rates, i.e. a fiscal strategy that assumes financing conditions remain favourable over the long term is inherently risky. Yet such worries are likely to take a back seat so long as high unemployment is a problem and the BoE maintains what is effectively an open-ended gilt purchase programme, alleviating concerns about the market’s capacity to digest the supply of sovereign paper.

The MPC has been in wait-and-see mode since June, as more clarity is bound to emerge in the coming months about all the key factors dictating the shape of the economic recovery, i.e. the virus cycle, Brexit and the Chancellor’s fiscal plan for 2021. Just as officials want to see the whites of the eyes of inflation before they even start thinking about tightening policy, so they do not want to rush ahead with additional easing just yet.

In order to enhance its forward guidance, the MPC is keeping all options on the table, including negative interest rate policy (NIRP). We remain of the view that the launch of NIRP is a “tail” scenario: with downside risks to banks’ balance sheets on the rise, it will take a serious economic relapse to force the MPC’s hand. But as is the case with any “tail” scenario, policymakers need to be ready for it.