Arguments about a bubble in equities continue, with US tech at the center of the dispute. Some are drawing comparisons with Dotcom in the 1990s. Yet the economic risks are greater this time. Big tech companies provide the best exposure to a secular growth story, but watch macro vulnerabilities in labour markets and commercial property. 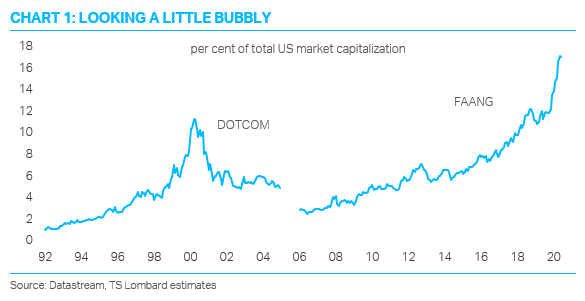 The US stock market continues to defy the sceptics, resilient despite the ongoing health and economic crisis. While in April it was possible to believe investors were ‘looking through’ the impact of government lockdowns, this narrative seems less compelling with infection rates in many parts of the world continuing to rise. For the bears, this is a liquidity-driven bubble that has nothing to do with fundamentals. The bulls, meanwhile, highlight the importance of permanently low interest rates, which they claim justifies a market rerating. After all, what is the alternative investment? US tech stocks are at the centre of this debate, with their dominance growing in 2020. If the tech superstars are less vulnerable to the COVID-19 recession, because consumer and business activity is moving online, surely investors should pay a premium to own these companies (especially in an era of zero bond yields). Yet the euphoria in US tech is starting to stretch beyond its potential resilience to COVID-19. A longer-term bull narrative is also enticing investors, based on the idea rapid technological advancement will allow the big tech companies (including the likes of Tesla) to escape secular stagnation. Can new digital technologies live up to this hype? And if they can, will today’s “superstars” provide the best exposure to this theme? 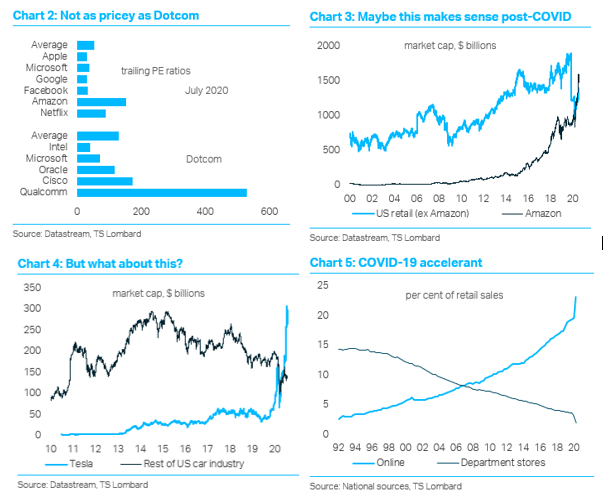 Historically, new inventions have often been associated with asset-price bubbles. So it is not surprising that people are making comparisons with the Dotcom era in the late 1990s. Back then, rapid developments in computer power, communications, and the creation of the Internet produced a powerful bull market in stocks, ending in a spectacular crash. Yet, while most of the companies that were part of Dotcom failed to live up to expectations, there was a fundamental basis for investor optimism – the economy was changing. This New Economy delivered a period of rapid productivity growth, halting a 30-year deterioration, which combined with globalization to raise the equilibrium profit share and reduce inflation. Today, while industry-insiders again see a bright technological future (even a “Second Machine Age”), the macroeconomic benefits are less obvious. Yes, the official data understate the influence of digital technologies – another parallel with the 1990s – but this is not the whole story. Technological diffusion has also slowed, with the superstars capturing most of the efficiency gains. So far, these companies have been able to break free of the secular stagnation that has gripped the rest of the economy, particularly a fail-tail of corporate laggards that became dependent on cheap labour and low interest rates. 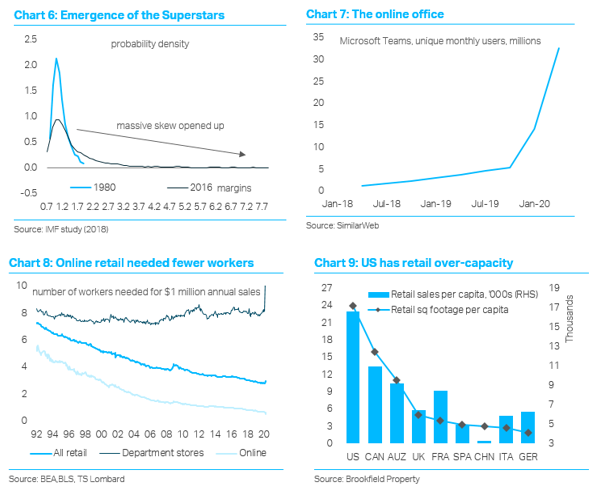 There is no clear consensus on why technological diffusion has slowed since the 2010s. Tech enthusiasts blame implementation lags, as it takes time to reach critical mass for new technologies, restructure existing businesses and make complementary investments in e.g. human capital. Others blame lax anti-trust regulations, patent abuse and proprietary investment. COVID-19 is unlikely to break these barriers in the short term, which means the tech superstars will remain the main beneficiaries of any secular ‘disruption’ theme. While the pandemic has certainly accelerated the adoption of digital technologies, it is impossible to know whether this is the ‘quantum leap’ industry-insiders have been anticipating. The macroeconomic implications could be extreme. While history offers reasons for optimism – the technophobes are usually too pessimistic – the transition doesn’t look easy. In the short term, digital disruption is likely to amplify important macroeconomic vulnerabilities, especially in labour markets, the traditional retail sector and commercial property (including “Mallmageddon”). New technologies will also widen social inequalities and create further polarization, which could trigger populism and a regulatory backlash. Pundits warn of a “Dotcom II” bubble but the current situation is scarier. Dotcom crashed the stock market – the fallout from the current crisis could be more profound.