The authorities’ attempt to reopen their economies has caused a sharp acceleration in COVID cases across Europe and the US, the (entirely predictable) “second wave” of the pandemic. While the health authorities are better prepared than in March and mortality rates are lower, the speed of this reacceleration and the potential duration of the second wave (it could last all winter) is causing alarm among government officials and scientists. Many European countries have already announced new restrictions, while voluntary social distancing could cause a renewed downturn even without formal lockdowns. There is now a strong possibility of a “double-dip” global recession, reversing some of the progress that was made in Q3. Meanwhile, the latest GDP data remind us that most OECD economies were already struggling with serious shortfalls in activity, thanks to re-openings that were patchy and incomplete. Sectors that are especially vulnerable to the pandemic – these account for around 10% of OECD GDP and 15%of employment – have remained a critical source of weakness. The latest escalation in the crisis could even unsettle financial markets, especially European equities, which do not benefit from US tech dominance (the “tech superstars” are less exposed to COVID-19). Yet the real economic danger from this second wave is its potential to deepen macroeconomic “scars”.

The second wave of the pandemic has made a double-dip global recession inevitable, which in turn has made the prospect of economic scarring more serious. Scarring or hysteresis occurs when cyclical downturns cause lasting economic damage, altering the future trajectory of the economy. This can take many forms, including (i) low capital spending depleting the capital stock, which harms productivity; (ii) corporate bankruptcies and credit strains, which amplify cyclical weakness; (iii) zombification and other resource “mismatches”, and (iv) long-term unemployment, which can increase the NAIRU and reduce labour-force participation. So far, there is limited evidence of scarring from the COVID-19 recession. Central banks are determined to ensure this remains the case, but fiscal decisions matter more. The risk is that politicians, worrying too much about “the long term”, are embraces a deafest attitude that will ultimately be self-fulfilling. Economic scarring is highly likely without an adequate fiscal offset. 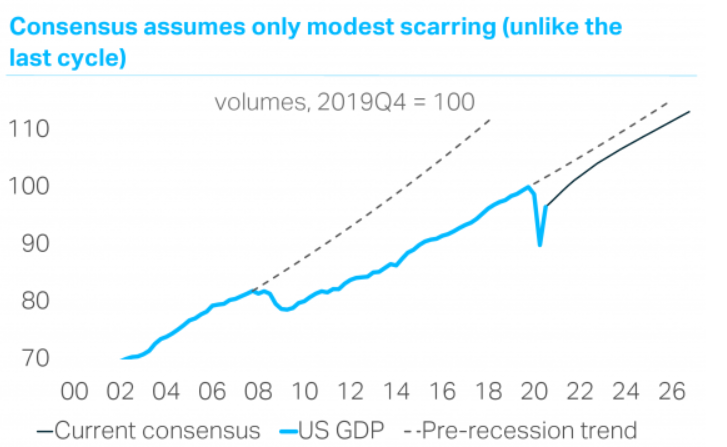