The recovery in investor sentiment since March has been impressive (even puzzling...). Back then, as the global economy entered lockdown, a “flight-to-safety” rapidly became disorderly, leading to an outright “dash-for-cash”. Equities experienced their fastest declines in history, commercial paper markets froze, global dollar funding evaporated, and some institutional investors dumped corporate securities in response to large fund outflows. Even the market for US Treasurys, among the most liquid in the world, displayed obvious signs of stress. Emerging Markets were particularly vulnerable, suffering capital losses that dwarfed previous EM crises. Many of the risks we had warned about before the pandemic – especially those associated with “market-based credit provision” or “shadow banking” – were materializing at the speed of a financial crisis. Fortunately, policymakers had a clearer understanding of these risks than in 2008, stepping in aggressively to break the dangerous feedback loop between markets and the real economy. The Fed’s response was particularly important, marking a turning point for global financial conditions. The central bank took on the role of lender-of-last-resort for struggling US companies, squeezing spreads narrower, while providing a backstop for global dollar funding.

Thanks to the data released over the past month, including new ‘real-time’ statistics on activity, the scale of the pandemic’s impact on the global economy is becoming clearer. The Bank of England, which has the longest historical database, suggests 2020 will see the largest decline in GDP since ‘the Great Frost’ of 1509 (-14% versus 2019). According to Opportunity Insights, US consumption is currently tracking around 20% down on its January levels. As consumers stay at home, COVID-19 is causing massive strains on corporate balance sheets, with a collapse in revenues and serious pressure on cash flow. The Bank of England’s latest Financial Stability Report makes the first rigorous attempt to quantify these effects, estimating a “cash-flow deficit” worth 10% of UK GDP. The situation is similar all over the world – the BIS suggests most OECD companies will be operating at a loss in 2020, quickly running out of cash. So, Part (ii) of the global policy response (after Part (i), the efforts of central banks to calm financial markets) has seen the fiscal authorities attempt to plug the giant hole in corporate balance sheets by paying a chunk of their wage bill. This has temporarily pushed unemployment rates to Depression levels, but the authorities hope to prevent large-scale bankruptcies and permanent job losses. 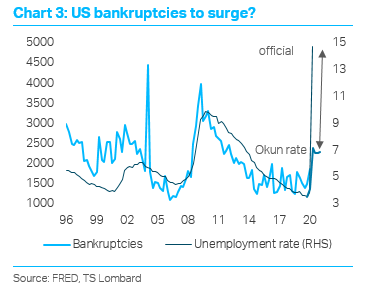 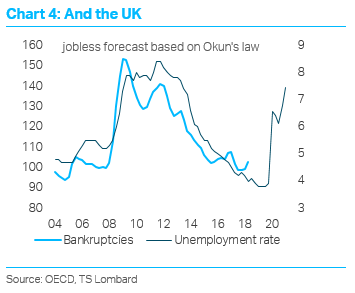 With central banks backstopping markets and governments plugging corporate deficits, investors are happy to ignore the worst economic data they will see in their lifetimes. After all, is the largest decline in GDP for 300 years really so surprising when the global economy has been closed for 2-3 months? And since the authorities are encouraging businesses to temporarily cut their workforce to qualify for fiscal support, even Depression levels of unemployment are less remarkable than they seem. What matters is not the scale of the downturn, but rather how the global economy looks over the next 3-12 months (which is why Q2 data are irrelevant at this point). While the policies announced so far have helped to support macro fundamentals through the lockdown period, they will not be sufficient to prevent the global economy from settling on much a weaker post-pandemic trajectory. This will inevitably have implications for the corporate credit cycle, resulting in persistent balance-sheet distress. Current financial conditions – especially in equities, but to a degree credit too – do not reflect this reality. Since weak balance sheets will hold back the recovery, fiscal policy must do even more to support global growth. The measures that are now in place are only sufficient to deal with a short-term growth problem. 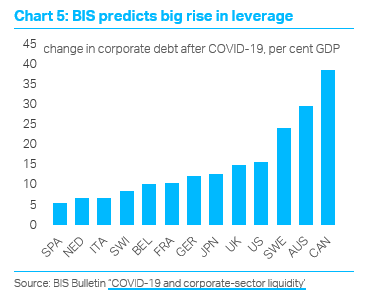