This economic cycle has matured very quickly, courtesy of a strong policy response and the speedy arrival of effective vaccines against Covid-19. Indeed, this has felt more like a bounce-back from a natural disaster than a rebound from a deep recession. A look across the global macro landscape shows we are now in the midst of a transition from an early-cycle to a mid-cycle environment.

Leading indicators, survey data, the bond market and equities are sending essentially the same message, i.e., that we are moving past the phase of easy, ‘V-shaped’ gains in output and risk assets. This transition is also starting to be echoed by policymakers, with major central banks toning down their dovish guidance. 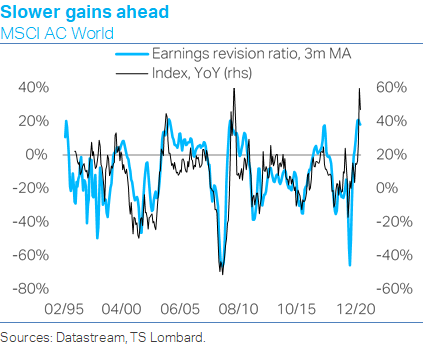 Our Global Leading Indicator has edged higher over the last couple of months but is already past its cyclical high (set in 2020 Q3) and the balance of risks looks skewed to the downside, consistent with strong but cooling momentum. Also, the percentage of countries whose OECD LI is rising MoM tends to be an early marker of turning points in the global manufacturing PMI, itself a proxy for the industrial cycle. This series has topped out, pointing to limited further upside for the PMI. 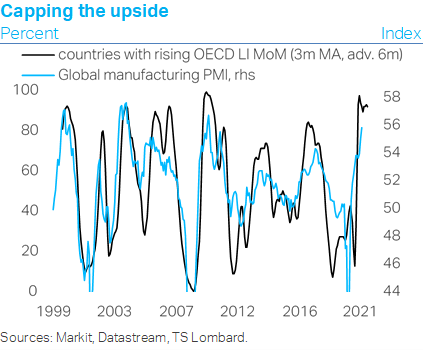 A closer look at the PMI’s underlying components confirms signs of momentum exhaustion, underscoring the need for a shift away from new orders to restocking activity as the driving force of output expansion. Both the new orders and stocks of finished goods PMIs rose in April. But while the former is not far from the record highs set in 2010 Q2, the latter remains well below its long-term average and has yet to match the surge in the quantity of purchases index, which measures the amount of goods manufacturers buy for use in the production process. For now, the combination of low stockpiles and rising backlogs is enough to keep the industrial cycle humming, but the orders-led boom will inevitably lose steam as the post-Covid rebound matures. If the post-GFC experience (2009/10) is any guide, inventories should soon start to play catch-up as new orders crest near record high levels. 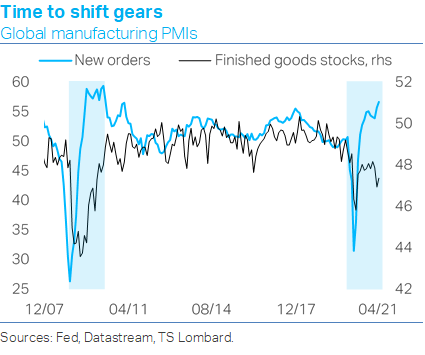 China’s official PMIs are starting to tell this story: inventories ticked up in April, and it looks like 2020 Q4 marked the top for new orders. As Chinese orders tend to lead the global aggregate by a few months, the latter can be expected to top out in the not too distant future. World trade volumes are already back above pre-pandemic levels.

The move from early to mid-cycle is not only evident in goods but also in services. The global business activity PMI has started to catch up with the recent jump in forward expectations, bringing this spread down to its long-term average. The same is true of employment, with the differential between services and manufacturing reverting lower in April, close to its historical mean.

As the global economy turns the corner, policymakers’ rhetoric is starting to shift. The focus of fiscal easing measures is turning from putting a floor under employment and consumption to boosting investment, which may be the prelude to a revival of business capex as uncertainty fades and demand heals. Perhaps more important at this juncture, major central banks (e.g. BoC, BoE) are starting to dial down their ultra-dovish stance, and we expect the Fed to announce sometime this summer the tapering of Treasury purchases by yearend.

While we do not see this triggering a 2013-style “tantrum” in the bond market, the Fed’s announcement should start to give the market a better idea of what the next tightening cycle might look like. This means that although long US Treasury yields are unlikely to jump, the short end may start to respond. Most of the commentary on the 2013 taper tantrum tends to focus on the sharp rise in long yields at the time (which fizzled out over the course of 2014) but not on the fact that it marked a low point – and the beginning of a multi-year uptrend – for two-year Treasury yields.

So, while the Treasury curve (10s/2s) could have further to steepen from here, it looks like the balance of risks is about to shift. As reflationary forces continue to gain traction, sooner or later the action on the Treasury curve will move from the back end to the front end. This means that the bulk of the steepening cycle that began in 2019 Q3 may be behind us. 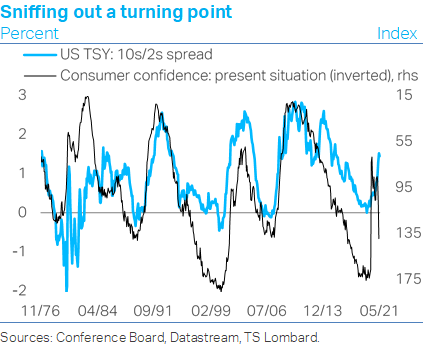 This is also the message we take from the latest Conference Board data on consumer confidence, which suggest US households are starting to buy into the recovery. Strength in the “present situation” index often sniffs out the peak (i.e., the beginning of the end) of yield curve steepening. In short, the return of consumer confidence tends to indicate that the Fed is getting ready to dial down the intensity of its monetary easing and/or enter a tightening cycle. In other words, the clock may soon start to tick backwards, even though this time round the Fed’s Flexible Average Inflation Targeting regime implies a longer lead time than in past cycles. Still, with the balance of risks for core inflation skewed to the upside going into 2022, the Fed’s communication challenges are not getting any easier.