The shock of 2021, friction in global sourcing of capital and labour, brings back the output gap as a determinant of inflation and thus returns some slope to the Phillips Curve. This makes the “is inflation peaking” question irrelevant. The relevant question is whether a 2% inflation rate will still be possible with 3.5% unemployment. It is not. The FOMC is far from on board with this view at present, given how FRBUS model results are built on the last 20 years of data, when the global output gap mattered most. Assuming the neutral real interest rate remains at 0.25% (true short-term, unlikely long-term), the difference between 3.5% unemployment in a frictionless world and one with friction is about 50bp to 100bp on the funds rate. My estimate raises the Fed’s early 2023 target rate to 4.25% from the market’s 3.25. Even if recession results because of wealth being destroyed by the equity market, inflation still lingers above the 2% target for a while, and this will keep the Fed from driving interest rates back to the zero lower bound. After all, recovery will occur at some point and the world has changed.

The shift away from frictionless sourcing of global resources adds to the domestic dynamic that is increasing demand for loanable funds – and QT adds supply. The communication of QT is negative for risk assets in capital markets because it tells markets that even as waves of bad news come crashing in, the Fed does not have the market’s back – they will still be pulling liquidity out. The plumbing of QT unlocks reserves and reverses for banks and money funds to invest as they choose and the choice to roll returned monies into UST is not a given, and this is less true today than it was the last time QT was underway. A near-term recession obviously slows loan growth, but recessions do not last forever and when recovery ensues the large expansion of reserves will still be there for banks to turn into loans. For now, there is no recession, and our Inflation Dashboard (below) shows the loan/deposit ratio turning red. 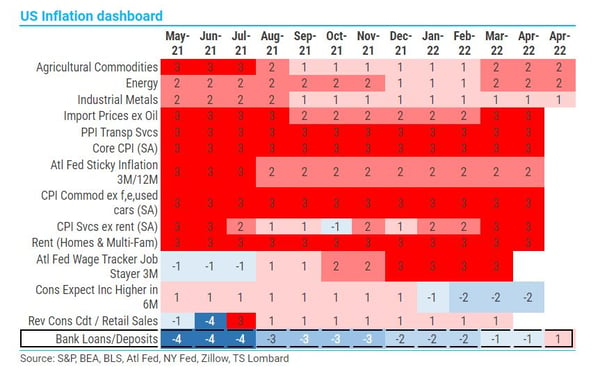 Current inflation losing momentum was never the question, and we measure it in several ways, including the 3M vs 12M rates-of-change for various sub-categories (Chart 1). The question is what level inflation drops to. Inflation is always financed; it is how too much money is created to chase too few goods. Critical to the US economy is that the cost of supplying these goods has shifted higher, seemingly permanently higher versus pre-Covid days. This made the intensity of last year’s chase, created by fiscal transfers, that much more inflationary. The transfers are gone, but the savings remain, nominal income growth remains high and real incomes will soon rise as goods prices fall, and employment growth is still extraordinary by any measure but especially given low unemployment rates and with 100% of total jobs lost, now recovered. These are powerful counterweights not normally in place during periods of wealth destruction when a bear market in equities takes hold. With the output gap negative along with short-term real rates, loans are growing. Further spurring loan growth is bank loans and leases not being this low relative to deposits since the early 1950s -- a rebalancing of aggregate bank balance sheets is in order. 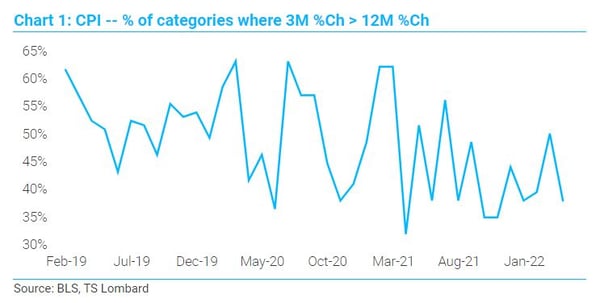 All of which adds to inflation dropping, but not back to 2% -- 3.5% seems a reasonable run rate and using this as a base, my adjusted Taylor rule suggests a 4.25% funds rate. The Taylor rule assumes a 2% neutral real rate, 2% inflation target, and 4.5% as the NAIRU unemployment rate (difference between actual unemployment and NAIRU is the output gap proxy). Adjusting the Taylor rule to a 0.25% neutral real rate and a 3.5% NAIRU to effectively eliminate the domestic output gap as a source of inflation, we see in Chart 2 that the adjusted rule better tracks where the funds rate was from 2016-19 than the Taylor rule. Considering where growth and inflation were during those years, the Taylor-rule funds rate would have been too high. Similarly, considering that inflation is now heading lower by its own accord, setting either Taylor rule to current inflation rates would require a too high funds rate of 8% or 11%.

Looking to early 2023, to get the 3.25% funds rate priced in, the inputs need to be 3% core inflation, 4% unemployment, with no change in the output gap from pre-Covid days. Raising target inflation to 2.5% drops the 3.25% rate to 3%. Because the whole point of this DN is the re-emergence of the output gap as a determinant of domestic inflation, I re-establish it in the formula (modestly) by hiking NAIRU to 4%, not quite the 4.5% of the Taylor Rule, assume 3.5% inflation at year-end and 4% unemployment, and this adjusted Taylor rule requires a 4.5% funds rate – or 4.25% if the inflation target rises to 2.5% (which they will do, even if now unannounced).

In sum, it is difficult to see 3.25% as an adequate funds rate to dampen domestic demand unless there is a serious recession and accompanying collapse in demand. While recession risk is now higher, and risk of much slower growth even higher than that, the key point is that the return of friction to global sourcing of labour and capital means the output gap, and hence money growth, matters again. Away from the equity market, there is still strong growth momentum not usually in evidence when the bear is running the market. Dampening demand is the Fed’s call, and they will not be quick to reverse course even if unemployment rises. How high does the funds rate need to go? Accounting for lingering inflation tied to the emergence of a credit cycle (smaller now, bigger in a few years) and that the output gap now means something, 4.25% is a reasonable expectation. Unless growth collapses. In the world today, all possibilities have become probable.