Policymakers all over the world have responded forcefully to COVID-19, using war-time analogies to justify massive expansions in their budget deficits. With governments adding up to 20% pts of GDP to their national debts, their words are no exaggeration – a fiscal easing of this magnitude is unprecedented in peacetime. Meanwhile, there are other similarities to wartime economics, including widespread supply disruption and the fact most people are unable to engage in regular activities. But is ‘war’ the correct analogy for COVID-19? History suggests military conflicts and pandemics have had quite different macroeconomic consequences. Whereas wars are highly inflationary, pandemics are often deflationary. In the short term, the war analogy can only apply if the authorities are successful in keeping death rates down and plugging deep holes in their economies. We see little prospect of a serious inflation outbreak during the next 18 months. The economic recovery from COVID-19 is sure to be slow, which means shortfalls in demand could persist into the second half of 2021. Even after the authorities have contained the disease (which could take more than one “lockdown”), unemployment will stay above pre-virus levels, while consumers and businesses will be more reluctant to spend.

The implausibility of a quick, ‘v-shaped’ recovery reflects the magnitude of the economic disaster, not the failure of the authorities to act decisively. In fact, the global policy response has been far more radical than anyone could have imagined even a few months ago. Governments now have three clear budget priorities: (i) fighting the infection itself, which requires a massive increase in health spending; (ii) disaster relief, targeted on those people and sectors suffering the greatest economic fallout from COVID-19; and (iii) sustaining aggregate demand and employment. While the speed and size of this policy response has been impressive, it also accelerates an overdue transition from monetary to fiscal tools, a shift that was primed even before this virus. Policymakers not only recognize the limits of having relied too heavily on monetary policy, they are also responding – at last – to the lowest government borrowing costs in 700 years. The consensus view about what constrains public debt has changed in radical ways. Rather than monitor traditional metrics such as debt-GDP ratios, many economists now believe inflation is the only limit on government borrowing. And with central banks open to the idea of ‘capping’ long-term interest rates, nobody is scared of the bond vigilantes anymore. 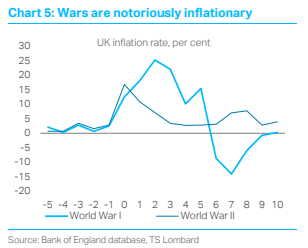 By adopting a wartime response, governments are diluting the anti-inflation bias they built into macro policy institutions after the 1970s. Even if this is unlikely to cause immediate price spirals, it hints at a longer-term ‘fire regime’ that will replace the current ‘ice age’. On the fiscal side, there will now be a lasting temptation to use fiscal policy without limit, perhaps in a futile effort to restore post-war growth rates. When the current health emergency is over, other spending priorities will appear – such as the ‘war on climate change’. Or a ‘war on poverty’. On the monetary side, central banks will face a much stronger challenge to their independence, which could ultimately loosen the ‘nominal anchor’ from their inflation targeting frameworks. Capping yields is definitely not the same as ‘monetary financing’ – a popular misperception that seems to be adding to the current inflation narrative – but any longer term tendency for prices to rise could exert huge pressure on central banks not to tighten policy (particularly if the sustainability of government finances depends on it). Still, in the end, the inflationary consequences of COVID-19 will depend on much deeper influences than the bias it has created for fiscal and monetary policy. Anti-globalization and income redistribution offer a greater challenge to bond investors. 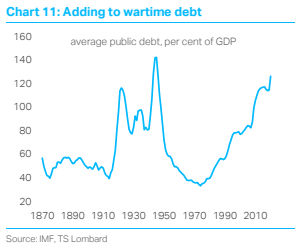