FOMC commits to recession - are they late on this too?

Powell told us policy is going to create a recession, but soft peddled it enough to leave markets to figure that out for themselves. After all, the FOMC is still very much in the clench of a dance between its objective to lower inflation and its desire to keep markets from crashing. Having to suddenly ease because markets seize up is not a corner in which they want to find themselves. Still, throughout the press conference Powell said a soft landing is increasingly difficult because of inflation factors out of their control, yet whether in control or not, the Fed “must find price stability in this new world”. To underscore his point, he said that several months of compelling evidence of falling inflation is required before believing “job done”. Inflation is a lagging indicator. Consequently, weak growth and rising unemployment will not stay the Fed’s hand if disinflation fails to materialize at the same time (it won’t).

The Fed has also finally ceded the idea that they are tighter than the spot funds rate because the yield curve prices in the forward communication of the funds rate trajectory. I have argued against this view for some time, citing carry costs for inventory in the nonfinancial world, and it looks like Powell has finally caught on. He admitted that recession is not arriving with the funds rate still in deep negative territory. Yet, he also tells us that policy only needs a mildly restrictive funds rate (3.5%-4.0%) in 2023 to get growth lower and inflation halved. He knows better, but dancing is not easy when desire keeps stepping on your toes.

If a recession is not imminent, and I agree with Powell that it is not, the rate trajectory in the SEP is a soft-landing fantasy, though less of one than what was released in March. One can see a quarterly recession and too high inflation co-existing inside these annual median forecasts. On the other hand, the current economy is slowing, and one must consider the possibility that the Fed’s growth outlook will be as off the mark as their inflation outlook of a year ago. No one ever went broke fading a Fed forecast. My Q/Q growth forecast for real GDP in the current quarter is 2%, towards the bottom of the consensus band centred at 3% -- the Atlanta Fed GDPNow model is at 0%.

The economy is slowing. Initial unemployment claims are drifting higher but remain well within levels reflective of a strong labour market. Powell talked about job openings as his key metric for the extreme imbalance between labour demand and supply, Our high frequency data on job openings from Global Data strongly imply that a sharp drop in openings will be evident in the next few JOLTS reports. Again, weaker openings but still at high levels relative to the past several years. This is all part of growth downshifting from Covid-boom to something akin to the new trend. More problematic is weakness in railcar loadings of cyclical cargo (Chart 1) compared to the years prior to Covid. If this was just a Covid boom-slowdown cycle, railcar loadings should not necessarily be weaker than 2016-19. 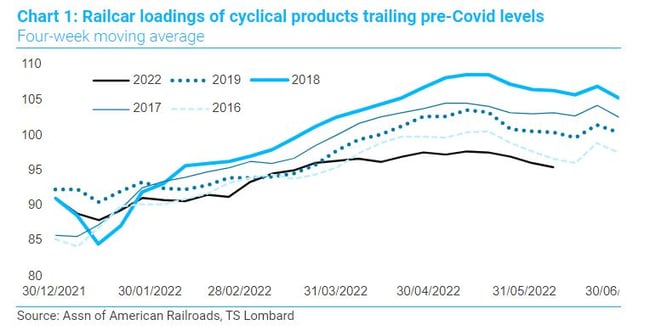 Weakness in May retail sales, on a nominal and real level, owes to monthly volatility in the data and increased price resistance. Retail discounting is becoming more widespread. There is no law saying consumers have to the pay the price offered. It is true that the weakness in the equity market will have a dampening effect on spending in the coming months, more likely Q4, especially for big-ticket items. More important, growth in overall wage growth (product of employment, wages, and hours worked) still supports stable spending (Chart 2) – the Dec 2021 dip owes to the omicron variant.

Housing demand is slowing, no surprise given the jump in mortgage rates and the failure, to date, of prices to adjust downward. Prices will at some point. Builders, however, remain in excellent shape from an inventory perspective when we look at the level of new home sales and the low percentage of homes sold that were completed. From an overall demand perspective, home sales never really entered the realm of sales during the mortgage-mania period (Chart 3). I expect a negative contribution from housing (residential fixed investment) in the current quarter. Business fixed investment is beginning to slow as well, but knock-on damage to real GDP growth is unlikely – in the near-term. 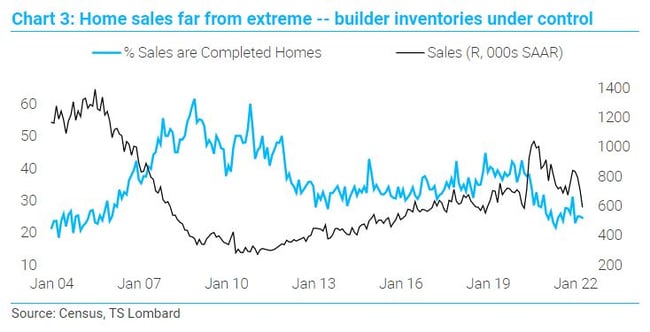 In terms of household balance sheets and credit more broadly at the banks, this short-lived Covid-boom did not create a return to the leveraged activity of pre-2008 America (Chart 4).

There is also a lot of chatter about inventory/sales ratios being too high. Aside from any one industry, such as retail apparel, the overall picture is one of a return to “normal” for wholesale I/S levels excluding oil and automobiles (Chart 5) – and whether normal is still too low. The big inventory build is more than likely coming to an end, but if it still grows apace, this is what shifting from “just in time” to “just in case” is all about. In other words, pre-Covid ratios may be too low for the new world. While inventory may not be a large net add to GDP growth in coming quarters, but a large correction is also not looming.

In sum, it's either a recession soon and the Fed never reaches its now steeper rates trajectory or a recession later. My view is later for the recession, meaning 2023 with an outside chance it begins by the end of this year – and the funds rate will move much higher and do so sooner than current projections. The bond market still wants to believe the transitory soft-landing fantasy rather than take in the hard points Powell made about the intersection of growth, unemployment, and a policy stance now “strongly committed to returning inflation to its 2 percent objective”. In other words, recession is an inevitable outcome, the timing is the question. Job well-done for Powell in soft peddling the message. He needs a slow orderly rise in yields and drop in equity market values -- a healthy two-way market on the way to the bottom.