Get ready for the super-charging of US-China decoupling

Nearly two months into the Russia-Ukraine war, US policymakers – troubled by Beijing’s pro-Kremlin rhetoric – are forging ahead with robust plans to accelerate US-China decoupling. Of the five major decoupling pathways being explored today, two – the likely acceleration of the start of the process to delist nearly 250 Chinese firms on US capital markets by one year to 2023 and a first-of-kind US outbound investment screening regime – are currently included in different versions of the top-priority, bipartisan China competition bill that has favourable odds of being passed by mid-year. Two more pathways have the growing backing of the Biden administration, as evidenced by Treasury Secretary Janet Yellen’s pointed warning to China last week that its continued fence-sitting on Russia will jeopardize further global economic integration. Barring an unlikely U-turn by Beijing, the upshot is that the decoupling of the world’s two biggest economies will gather speed over the next three to 18 months – likely unleashing bear market risks for both China’s economy and US equity valuations – that will be reinforced as the EU charts its own decoupling path by mid-decade.

Investor attention to date has largely focused on the first pathway for decoupling: the potential delisting of an estimated 248 Chinese firms from US capital markets under the 2020 Holding Foreign Companies Accountable Act (HFCAA) for failing to allow full access of their books to US-approved auditors. Notwithstanding recent signs that Chinese regulators may be softening their stance, we expect an eventual delisting of key high-profile firms as an inevitable by-product of Beijing’s own data security concerns. Under a provision in the China competition bill, the start of this delisting process is set to be brought forward to next year (from the 2024 timeline set by HFCAA); its likely inclusion in the final bill would fast-track an initial rerouting of investment flows.

However, alongside this measure, investors should monitor four other overlapping mechanisms that could further quicken the pace of decoupling ahead:

“NATO for trade”. Since 2020, there has been talk in Washington policy circles about the benefits of creating a new trade body for free market democracies that would lie outside the WTO framework and could support countries that have been targets of China’s wrath in trade (e.g., Australia, Lithuania). This idea has gained newfound impetus following Russia’s invasion. Any signs that it is making further headway at home and abroad could pave the way for the initial outlines of how the global geopolitical re-ordering will be redrawn in years to come.

Global fractures are deepening, four years after the starting gun fired by Trump’s US-China trade war, with top losers likely to include China’s economy and US equities. Our China economist Rory Green estimates that a decoupling scenario similar to that outlined above could add a 1-2 ppt drag on potential Chinese growth over the next 5 years to yield an average 3-4% annual GDP rate on our TSL measure (vs 5-6% in consensus mainland forecasts), with downward risks if an accelerated decoupling takes place (e.g., a EU/Northeast Asia split from China too). Meanwhile, our chief economist Charles Dumas warns that as deeper fracturing gets priced into the market, this will slash CAPE (using a 7.5 year cycle-length) and thus US equity valuations from an inflated 32 in Q1/22 (if down from 34 in Q4/21) vs a post-Cold War average of just over 25 and under 14 from 1914-91. As decoupling accelerates, can a bear market be far behind? 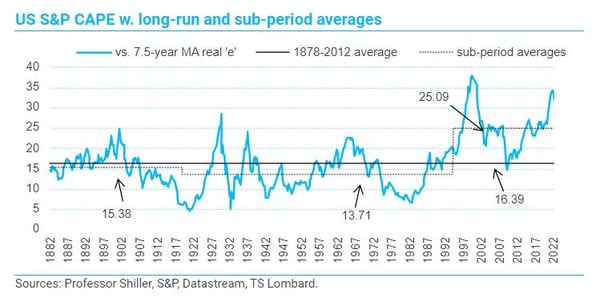