If the Fed buys stocks? Then sell

October 1929 – the Wall Street Crash is gathering frightening momentum. Several leading Wall Street bankers get together and decide to backstop the stock market, they come out swinging, placing a bid to purchase a large block of shares in U.S. Steel at a price well above the current market. As traders watch, similar bids are placed on other "blue chip" stocks. The tactic succeeds temporarily, it’s then repeated five days later by William C. Durant (General Motors founder) who joins with members of the Rockefeller family and other financial giants to buy large quantities of stocks to demonstrate to the public their confidence in the market. But, despite a small bounce in the market, their efforts fail to stop the large decline in prices. The backstop failed – spectacularly. 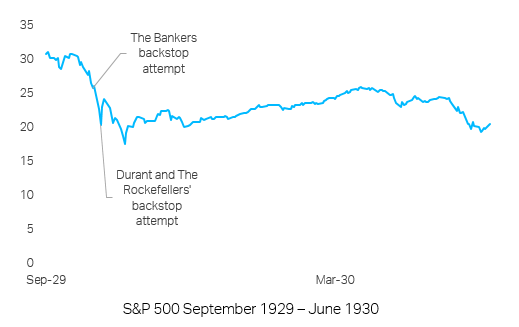 Clients have told us that if this current stock market bubble does burst, the Fed will end up buying stocks. This potentiality supports, even backstops, the stock market – thus TINA is ever more attractive! The Federal Reserve would surely succeed at boosting market prices where the bankers and Rockefellers had failed. We don’t think this is likely but even if it did occur, it would be a major sell signal, even if it gave support in the short-term.

Charles Dumas, TS Lombard’s Chief Economist tackels this hypothetical in his latest TS Lombard View – Wild First Half and Next? First off we will ignore the point that the Fed is not legally able to buy stocks under current law. Instead the U.S. government decides to buy stocks but chooses to do so through a supposedly expert agency (the Fed) not least to remove the ultimate blame from the authorising politicians if it all goes wrong.

Were the Fed to intervene and start buying stocks a major Rubicon would be crossed and one where the economic results would be disastrous… Japan can testify!

The safety blanket already thrown over the economy (by undiscriminating credit support for firms in trouble) is likely to reduce the long-run U.S. potential growth rate. For the government to be buying stocks (via the Fed) would be another major step down the road of Japanisation. Bear in mind that Japan’s real growth trend is now about 0.5% a year, a third of the U.S. in terms of hourly labour productivity and Japan’s growth since 1998 (a fair comparison as this base year saw a recession in Japan) has averaged 0.7% a year, half the U.S. 1.4%. The result over 21 years is that U.S. productivity is up 35%, versus Japan’s 16% – and that is with Japan’s wasteful ratio of capex to GDP, much higher than the U.S.

Japan is not the only country with a sluggish 20-year record - continental Europe looks pretty dire too. Comparing Japan to Europe is however a red herring and unfair. The EA average that equals Japan’s includes an actual decline of labour productivity in Italy. Even Germany’s growth has been less than the EA average, reflecting the lack of cost-cutting pressure in an economy with consistently undervalued labour costs. Given the euro’s structural problems (and the drag from Italy) Japan merely matching the EA is poor performance; with lavish capex ratios it is the global epicentre of low returns on capital, a major cause of negative real interest rates.

By any reasonable measure, a greenlight for the Fed to buy U.S. stocks would be a powerful long-run reason to sell them. The damage to the long-term growth potential of the world’s leading market economy must imply damage to stock-market values, as well as weaker real-income growth for everyone. Any moves to permit U.S. Treasury buying of stocks would require a major political shift. Sure the market might be boosted temporarily, in fact it almost certainly would be – the Fed is not a gaggle of bankers and financial titans, it has all the power of the U.S. government behind it. But the likely long-term result would be clearly negative – for the U.S. and for the world. You would hope the U.S. Treasury knows this…