Optimism: Mild US recession followed by a recovery and 2% inflation

The story of this cycle does not end when recession begins, the story, in fact, begins with the direction Fed policy takes once unemployment starts to rise. Recession of some sort was always inevitable to curb inflation. But with m/m core inflation accelerating since March, up to 9% SAAR in June, and with unemployment at a low 3.6%, soft-landing territory has long been left behind. Raising the funds rate100bp on July 27 to 2.50-2.75% (now expected) still leaves policy rates deep in negative territory. A funds rate of at least 4% is necessary to ensure demand reverses course and begins to create the needed slack to pull inflation back down towards 2%.

How the Fed responds once unemployment rises will greatly determine the course of inflation in the coming years. Leaving real rates high enough long enough for unemployment to stay above 5% for an extended period is the likely prescription to drive inflation back to 2%. The Fed, however, appears all too willing to get back to the AIT playbook once rising unemployment and decelerating inflation come into view and will probably bail as quickly as they can. They believe, like the markets, that inflation’s return to 2% is manifest destiny – or, failing that, perhaps 3% is the right target inflation rate. Markets today, like they were from the mid-60s until Volcker, price in unabashed optimism on inflation decelerating, this time without even a notable disruption to real economic activity, Quickly returning to negative real policy rates was the Fed’s mistake beginning in the mid-60s and that resulted in every successive cycle ending with higher inflation and unemployment rates, until Volcker cracked inflation – aided and abetted by a strong dollar and massive import substitution, an avenue no longer available.

Looking into the June CPI report, several disturbing aspects got the Fed’s attention. One is that core services (without rent of shelter) and core goods (ex food and energy) have been accelerating on a m/m basis since the spring began (Chart 1). 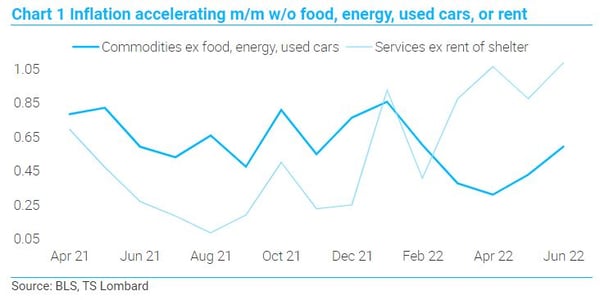 At the same time, the percent of CPI sub-categories with higher inflation has broadened back out to 50% (Chart 2).

Much is being made about falling commodity prices, but the story is broadening inflation and that the source of rising prices is shifting to credit and housing. We see this in the Heat Map reproduced below – industrial metals are cooling, bank loan/deposit ratios are heating up. Rent inflation remains red hot in the Heat Map and in the CPI report – rent of shelter was up 0.8% m/m and has been accelerating steadily since growing “only” 0.4% back in March. 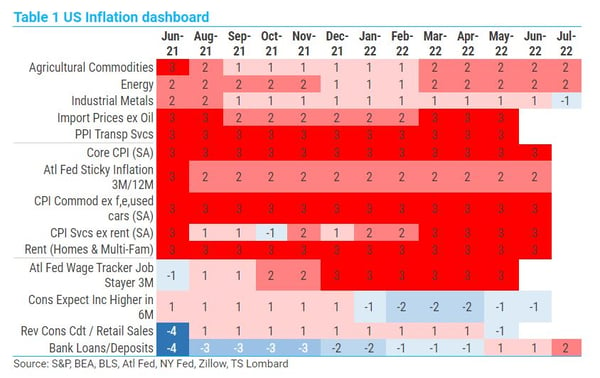 Despite all this and the persistence of negative real policy rates, the markets remain absolutely convinced inflation returns to 2% fairly quickly – quicker than even the Fed imagines. The current 2s/10s inversion is, in fact, an inversion of B/E inflation rates on the spot curve – 2.3% for 10Y versus 2.9% for the 2Y. Looking at B/E inflation rates five years forward they are all sitting at 2%, give or take a few basis points (Table 1). This drop in inflation is not tied to any recession outlook, given that forward TIPS yields are all higher than spot yields. This is, to me, market mispricing writ large and something seen before the bond vigilantes were the dominant group trading fixed-income markets. Today’s crowd began trading in the early 1990s and ever since – a period of low inflation created by events unlikely to be repeated quite so forcefully in the years ahead.

The US forecast has been revised -- pulling the 4.25% funds rate into this year moves forward the recession from mid-23 to the end of this year. The forecast sees Q2 real GDP growth just above zero, followed by a bit more growth in Q3 (technical factors and lower commodity prices boosting spending power) and then the recession begins in Q4 with the funds rate over 4% and core PCE inflation at 3.8%, Q/Q SAAR. Growth in total incomes (product of wages, hours, and employment) are today strong nominally and positive in real terms on a Y/Y basis, but real total incomes are fast slipping towards negative territory. This plus sustained equity market losses (real wealth lost and negative signalling on growth) and reduced capital spending by business and households are setting up the economy for a late year contraction. Q4/Q4 growth for real GDP is forecast to be -0.2% this year and 1.2% in 2023. The key part of the forecast is that by the middle of next year the funds rate is back below inflation, growth is 2.5% and inflation never decelerates much below 3%. I consider this an optimistic outcome. The Fed will blink once unemployment crosses above 4.5% on its way to 5%. The longer-term inflation impact is very negative if this comes to pass.

In sum, a recession is unavoidable and seemingly so too is the market’s optimism that every gets back to the way it was pre-Covid rather quickly. There is no recession priced into the forwards, only a sharp reduction in forward inflation expectations. Pay your money and take your chances, but this does not seem like a good bet. Looking beyond the next 18 months, the danger of the Fed bailing too soon on curtailing growth to curb inflation sets up for a return to 1965-79 monetary policy sensitivity that unleashed repeating cycles of rising inflation. Powell is acting more like Arthur Burns than Paul Volcker these days, including the perception that he held back on tightening at the end of last year so he would be renominated. The story to be written for this cycle is what the Fed does once unemployment starts to bite –a cycle the Fed created by its mismanagement of policy last year.