The cycle starts to bite

The macro story of 2022 is “higher-for-longer inflation” that is forcing central bankers across the major DMs, led by the Fed, to tighten into slowing growth. Going into this year, a slew of high-frequency indicators tentatively pointed to 2021 Q4 as the peak of the “inflation scare”. However, the Ukraine conflict and the return of lockdowns in major Chinese cities have amplified supply chain disruptions in 2022. This translates into global cost pressures increasing further, culminating later, proving stickier and therefore taking a heavier toll on real activity than previously anticipated.

DM central banks are laser-focused on inflation: as long as supply-driven cost pressures do not let up, the path of least resistance will be to tighten into a slowing cycle until demand shows signs of cracking. In this type of environment, the odds of a policy error are increasing, i.e., the risk is that interest rates rise until “something breaks”. Ironically enough, what the world economy needs at this juncture is a “growth scare” that allows policymakers to dial down their hawkishness but is not strong enough to bring about a recession.

Macro visibility remains pretty low, but in the near term the direction of travel seems relatively clear: the combination of tighter monetary policy, deteriorating global demand and persistent supply dislocations means that the growth-inflation mix is set to get worse before it gets better. The global manufacturing PMI is drifting lower, with output dropping to contractionary territory in April for the first time since June 2020 as new orders slide and inventories recover. This loss in momentum is driven by a sharp downturn in Chinese industrial activity. Inflationary pressures remain elevated, with businesses passing on higher costs to their customers at a faster pace this year, as can be seen from a falling input-to-output price PMI ratio. 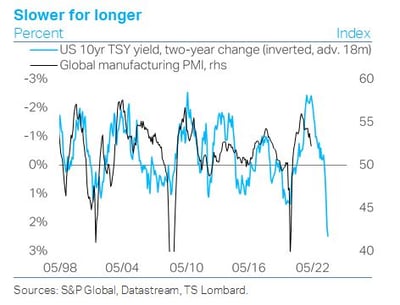 Manufacturers’ frontloading of purchases implies a “payback” period that should temper demand for raw materials going into 2022 H2. The stock of purchases PMI has declined this year after rising sharply over the course of 2021, underpinned not only by the post-Covid recovery but also by producers’ efforts to front-run future input cost increases. As inventories of finished goods normalize higher, this combination should alleviate cost-push pressures – particularly as the PBoC no longer seems prepared to stand in the way of CNY depreciation. 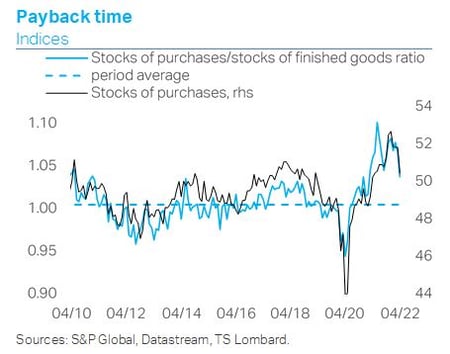 While the first year of the commodity rally (2020-21) was underpinned by a softer dollar and a recovering CNY, the surge in commodity prices after mid-2021 went hand in hand with strength in both CNY and the trade-weighted USD – an unusual combination last seen during 2011-13, a period in which commodity prices fell. Like then, the simultaneous advance in CNY and USD occurred against the backdrop of a cooling industrial cycle. But the combination of unusually strong demand for goods (the Covid/reopening cycle) and acute supply constraints with prolonged monetary looseness and geopolitical tensions propelled commodities higher.

Although the case for a secular metals-led commodity bull – driven by the global push to net zero – remains valid, from a cyclical standpoint a sustained slowdown in industrial activity coupled with CNY weakness, dollar strength and Fed tightening raises downside risks. In short, the stars are no longer aligned, leaving deficient supply to keep the rally going. And as concerns about the demand outlook intensify, commodities become less of a good hedge in investment portfolios. 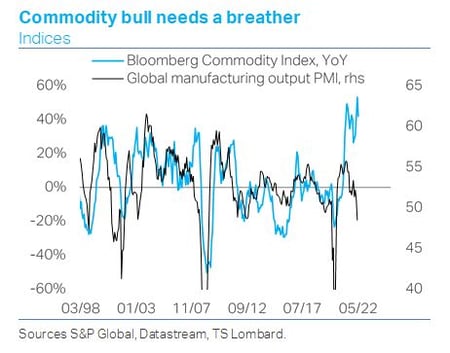 Higher-for-longer inflationary pressures also imply that the anticipated post-Covid shift in household consumption towards services will be dampened even as growth in demand for goods cools in volume terms. The global services PMIs show ongoing deterioration in forward expectations, which, if sustained, spells bad news for employment down the road. For the time being, however, job market conditions remain tight in the major DMs, while elevated household saving balances imply a healthy buffer for consumer expenditures.

Equities have been on the back foot in 2022 Q2. Investors have punished earnings misses and soft guidance – including from “Covid winner” megacap names – harshly, while earnings revision ratios remain negative as margins come under threat. Defensive/”bond proxy” sectors (e.g., consumer staples, utilities) have been outperforming the broader market in the face of a surge in Treasury yields, itself driven primarily by hawkish rate expectations rather than rising term premia. 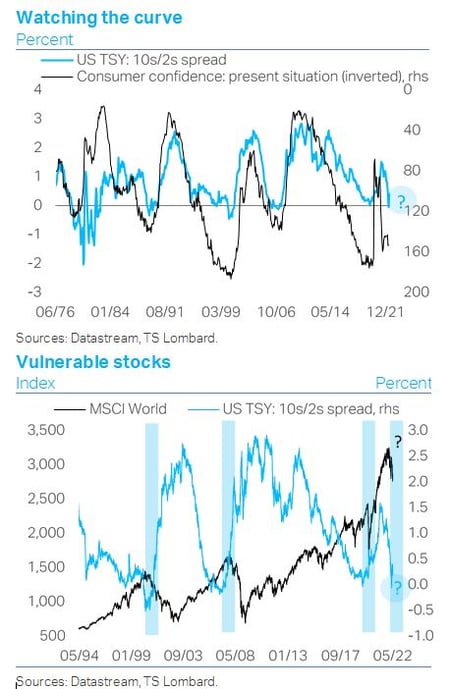 All this comes just as the US Treasury curve has started to bear-steepen following a year of flattening that led to a short-lived inversion in early April (10s/2s). This could prove another turning point for the yield curve, and historically these tend to be associated with strengthening headwinds for equities. During such periods, the macro backdrop is usually marked by an accelerating cyclical slowdown that forebodes a slump in consumer confidence – which this time round is already under pressure from the jump in inflation expectations. This combination ultimately catalyses a decline in interest rates, which, in turn, accelerates the curve steepening – essentially what a “hard landing” would look like. All these potential developments may seem remote at this juncture, but they signify the risk that lies ahead as the cycle evolves.