The rules to being a sellside economist

1) Economic forecasts: Forecasting GDP is basically a waste of time - no investor actually cares what this backward-looking gauge of the economy is doing. But getting it "right" is one of the few (though dubious) ways you can signal your value as a sellside economist. In the old days you would pretend GDP reverted to some sort of trend but today you can just assume it stays close to whatever the current level is (usually 2% for the US). If you get your forecast wrong, you should blame “unseasonal” weather. 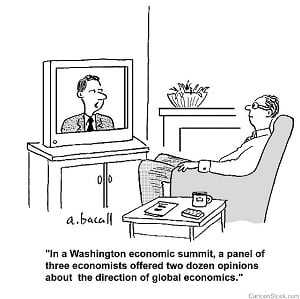 2) Game of two halves: Every year must be divided into two. If the economy is weak in the first half of the year, you should assume a recovery in the second half. If it is strong, assume a slowdown. Whatever makes the average of the two halves - there are always two halves - close to 2%.

3) Economic shocks: Whenever something unexpected happens, like extreme weather or a government shutdown, industrial action or trade tariffs, a financial journalist will always want to know what this means for the macro economy. You need an estimate that is high enough to matter, but not so large that it would force you to change your forecast or look obviously wrong within a few weeks. A good rule is that the event will add or subtract 0.3%pts from GDP. After all, this is invariably the answer you get from sophisticated econometric models (the economists who created these models obviously caught onto this idea long before anyone else).

4) Recession watch: History shows nobody can forecast recessions. Even those that do typically benefit from the ‘stopped-clock’ effect and usually get the causes of the recession totally wrong (see Dr Doom circa 2006). But you can’t admit this to investors and you certainly don’t want to get caught out by a downturn, especially when a lot of time has elapsed since the last recession. So the best approach is to emphasise the dangers of recession but claim this is at least 18 months away. If it happens sooner, you can say you correctly warned about the dangers. If there is no recession you can simply postpone your forecast and hope nobody remembers.

5) How to get attention: If you want to get famous for making big non-consensus calls, without the danger of looking like a muppet, you should adopt ‘the 40% rule’. Basically you can forecast whatever you want with a probability of 40%. Greece to quit the euro? Maybe! Trump to fire Powell and hire his daughter as the new Fed chair? Never say never! 40% means the odds will be greater than anyone else is saying, which is why your clients need to listen to your warning, but also that they shouldn’t be too surprised if, you know, the extreme event doesn’t actually happen. 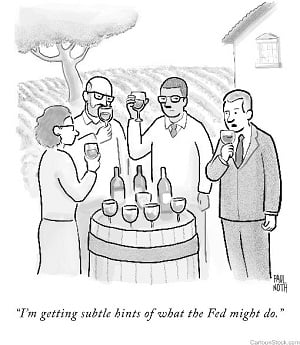 6) Central-bank watching. For the most part central banks will tell you exactly what they are going to do. But you don’t want to regurgitate this "transparency" because people will accuse you of being *too consensus*. So you must choose to be either slightly more hawkish or slightly more dovish. But as with recession forecasts, you don’t want to make strong near-term off forecasts because market pricing could influence policymakers - they try to avoid shocks. So maybe choose a 6-12 month window. If you still get your CB forecast wrong you have two potential excuses a) you can say officials are making a horrendous "policy mistake", or b) you can say their "reaction function has changed", which is a posh way of saying they are behaving erratically. Just because the central bank employs 10,000 people and has more resources than you can possibly imagine, doesn’t mean they have better information that a sell-side economist armed with Excel and a few Bloomberg headlines.

7) Market forecasts. This is really hard and it's best to avoid this altogether if you can. If you can’t, perhaps because you are an interest rate "strategist", your best option is to choose a forecast slightly higher of lower than the current spot price and then vary it in sync with the latest market trends. If the yields are falling, lower your 12-month forecast slightly. If you look on Bloomberg, you will see that this is exactly what the consensus does. The same approach works for oil prices. 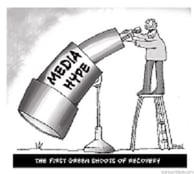 8) Forecasting the stock market. Most of the time the equity market goes up so, to quote a former equity strategist colleague "you need a damn good reason" to forecast it not going up. But you should also think about the response you will get from clients, especially if you work at an investment bank. If you forecast a bear market and it goes up, everyone will think you’re moron. If it goes down, everyone will hate you. But if you forecast a bull market and prices rise, you will become a hero (and if it goes down, nobody will remember because everyone will have got it wrong).

9) Mastering Chartism: It is possible to show a relationship between almost any two variables in macroeconomics as long as you can display them on two axes and are willing to spend enough time manipulating the second axis, experimenting with data lags, inversions or various moving averages. If you still can’t make the relationship work, extend your history to cover the Global Financial Crisis; everything looks correlated during the GFC.

10) And if all else fails, blame "liquidity". Liquidity can explain *everything*, it’s basically a residual. And since nobody can measure it, you can just infer its presence (or not) from whatever is happening to market prices. It's the equivalent of "confidence effects" in macroeconomics. The political right particularly like the term "liquidity" because it is a convenient way to accuse policymakers of ‘distorting’ markets without any actual evidence.