26 Mar 2020 - Charles Dumas
Widespread hopes for a V-shaped recovery from the impending recession will probably be dashed. And stock markets are only likely to rebound sharply if they fall a lot further from here – at Tuesday's Close the S&P index was down 27% from its month-ago peak. Economies, and therefore stock-market earnings, will be hit by knock-on cuts in labour income and business capex. Recovery is anyhow uncertain. Even with aggressive tax cuts, people cannot spend extra money while they are locked down. And it is far from clear what will be needed medically for the lock-down to be relaxed.
Debts built up in the last dozen years of easy money will mean squeezed margins create vulnerability in the US, also France and possibly Japan. US NFC debt is now over 75% of GDP, a historic peak; its GFC peak was ‘only’ 72½% of GDP, and in 2001, 65%. In any recovery, firms may need to sell shares, or slash capex, to reduce debt – or repay government assistance. 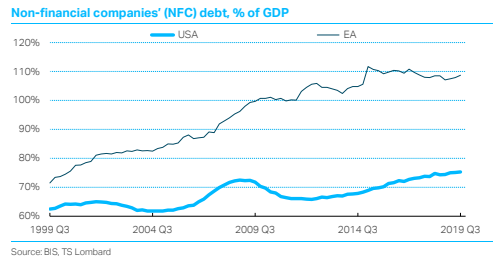 Our forecast for the US and EA GDP growth is as follows, at seasonally adjusted annual rates:

In the US, ‘social distancing’ has shut down industries that account for about 30% of private sector jobs (35 million). Just food services, recreation, air travel and casinos alone account for 11.6% of private sector employment and 8.4% of consumer spending. Our unemployment rate projection is a jump to 10.6% in April, meaning about 12 million people will lose their jobs in the first round. This is not necessarily going to be the high mark for this down cycle. Such a jobless level by itself will knock on to consumer spending weakness in Q3, reinforced by US households’ exposure to stock market losses – equity holdings are now larger than the value of their homes.
Capital spending follows earnings with a lag of at least six months, so the collapse in earnings will spread from the immediately affected industries (travel, leisure, retail). The oil price slump will cut into the large share of US capex required for shale fracking.
EA prospects are worse than the US. The dire impact of Covid-19 in Italy and elsewhere on the continent means Q1 real GDP will have fallen 1½%, a 6% annual rate. Italian GDP is about 15% of the EA total. Germany’s huge fiscal programme announced over the weekend is about 10% of its GDP, but mostly deals with the knock-on risks, rather than involving actual spending. Given inhibition of consumers by lock-downs, it is only through direct government spending that fiscal stimulus can be expected to create recovery, rather than defend stressed firms and people. 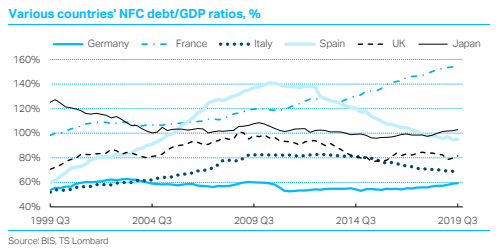 While Germany has less of a business-debt problem than most DMs, it is in France that debt risks look worst. Comparisons between countries are difficult, owing to different national customs, but the escalation of NFC debt in recent years will set back the repeated attempts of French governments to reduce the country’s state-sector dependence.
For non-Chinese EMs, total non-financial debt levels are less of a problem, now around 130% of GDP, versus less than 100% before the GFC (and much less for NFCs alone, about 50% of GDP). China’s shift into infrastructure-led recovery during Q2 should help them in Q3 and Q4. But the soaring dollar FX rate, up 10% against EM currencies in the last month, means their liabilities are becoming more burdensome by the day
The bold, and incisive, conclusions from this analysis were quoted by Barron’s on 25 March 2020.