Bonds are saying the market needs a new catalyst

The second quarter of 2021 is set to mark the peak in quarterly GDP growth for most of the major economies, which will give way to a still solid but slower pace of expansion as the transition from an early to a mid-cycle macro environment takes shape.

The business surveys continue to point to a healthy global industrial cycle, which is, however, long in the tooth. In services, the global business activity PMI has caught up with bullish forward expectations, taking the differential between these series below its long-term average against a backdrop of strong employment but also persistently high cost pressures. 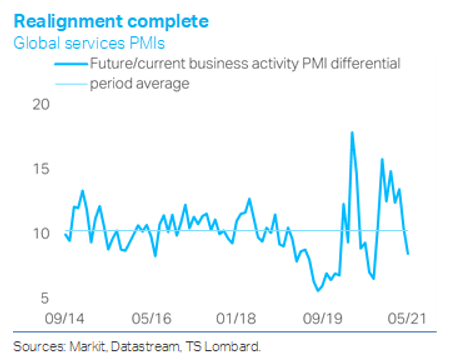 The combination of a snapback in demand with low inventories, Covid-related supply disruptions, shortages in key production inputs and strong base effects was always a recipe for an inflation scare, evident in recent high CPI prints in the US and elsewhere. The nature of these price pressures is mostly transitory and can be expected to moderate over time as the intensity of demand diminishes and supply disruptions ease.

The million-dollar question is about timing, i.e., how long these reopening frictions will last and whether they will get worse before they start to dissipate – not least as the policy dichotomy between China (throttling back stimulus) and the major DM economies (highly accommodative) means that this inflation cycle may be different.

Our take is that with the global input prices and backlogs of work PMIs hovering at the higher end of their respective long-term ranges, the bulk of the impact is behind us. In the same vein, the net share of US businesses planning to increase selling prices has risen to just shy of the record high set in the late 1970s, according the NFIB survey, implying limited further upside. What is more, the rally in US TIPS breakeven inflation rates, which tend to correlate closely with the NFIB series, is showing signs of exhaustion. Further, while the TIPS breakeven inflation curve (10s/2s) remains inverted, the degree of inversion is the same as it was at its peak in February. Taken together, these indicators suggest that we are nearing, if not already past, “peak inflation scare”.

With the US recovery well underway, it is only matter of time until the Fed begins to slow the pace at which is buys Treasuries. The Fed’s upcoming taper is justified and, unlike in 2013, should come as no surprise – both good reasons not to expect a bond market tantrum. Just as the accelerated advance of US long yields in 2021 Q1 validated the reflationary message sent by equities and commodities over the course of 2020 H2, the Fed’s signalling of its intention to taper will, in effect, be an acknowledgment of the economy’s speedy renormalization. Long Treasury yields have adjusted upwards to reflect an improving macro outlook but remain far from restrictive (especially in real terms). In the same fashion, the Fed’s taper will represent a reduction of liquidity at the margin but still leave monetary settings highly accommodative.

The real question for investors is how the Fed envisages the next tightening cycle. This is not so much about the state of the economy post-reopening (i.e., in 2021 H2) as it is about what happens to the growth-inflation mix further out (i.e., 2022 and beyond). In other words, will the swift return to pre-pandemic output levels be accompanied by a reversion to pre-virus rates of output expansion and high-street inflation or will macro momentum stay buoyant for longer, raising the odds that the US and other major economies achieve “escape velocity”, i.e., a combination of persistently strong demand, positive output gaps and sticky price pressures that does not hinge on policy stimulus?

We do not pretend to know the answer yet, but it is hard to deny that the ingredients for global macro momentum to remain strong beyond the post-Covid renormalization are falling into place.

First, a key difference with the 2010s is the brewing paradigm shift in DM fiscal policy. The US and other G7 governments are minded to keep the spending taps loose beyond this crisis as part of a broad push to “build back better”, e.g., tackle climate change challenges and redress income inequality. In effect, they seem to be taking a page out of China’s playbook (i.e., a bigger role for government spending) while also embracing Japan’s approach to coordinated policy easing (i.e., running big budget deficits in tandem with a large central bank balance sheets).

Second, the combination of elevated household saving rates and recovering labour incomes translates to a potentially huge tailwind for consumption. Coupled with a pro-growth fiscal policy, this could provide the spark for a sustained revival in business capex that sets in motion a virtuous cycle between household incomes and corporate profits. Against this kind of backdrop, the longer the Fed stands by its commitment to be late in its response to rising inflation, the higher the chances of a weaker dollar that acts as a catalyst for global reflation.

The bond market is behaving as if it has already renormalized along with the world economy and is marking time in anticipation of the next catalyst. US long Treasury yields embarked on a fairly steady uptrend in August 2020, which became more pronounced during 2021 Q1, boosted by a build-up in optimism around a faster, vaccine-sponsored recovery. Nominal 10yr yields topped out in late March along with the term premium and have drifted lower since, dragged by falling real yields and, more recently, signs of exhaustion in inflation breakeven rates’ advance. A short squeeze in the Treasury futures market apparently amplified yields’ decline last week. To us, these moves suggest that having already priced in the reopening and broadly discounted “peak inflation scare”, the bond market is taking a breather while the mid-cycle transition kicks in. 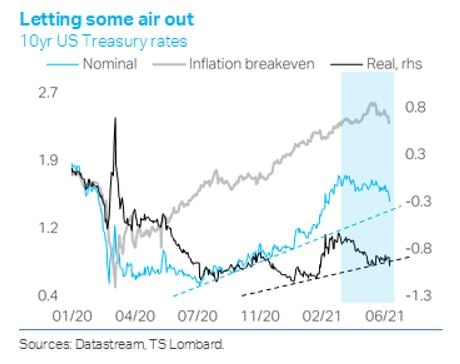 Similarly, global equities are making new highs but earnings expectations have finally caught up with the reality of the “V-shaped” recovery. The combination of elevated earnings expectations and rising cost pressures which will start hurting profit margins implies that earnings growth might not be high enough to offset the P/E contraction that is typical during mid-cycle transition periods, capping the upside for stock prices.

To sum up: the global macro outlook remains constructive, yet the shift to a mid-cycle environment implies a progressively more even balance of risks for both economies and financial markets. Barring a major resurgence in the pandemic that brings back widespread lockdowns and/or a scenario in which Beijing’s de-risking drive ends up slowing down the Chinese economy too much, downside risks to the global economy going into 2022 are more likely to stem from positive than negative macro surprises.

Central to this view is the combination of pro-growth DM fiscal policies and major central banks’ bias to let economies run hot with a view to restoring full employment. This engenders the risk of a disorderly rise in bond yields and/or a policy mistake from the Fed down the road, i.e., waiting too long and then stepping on the monetary brakes too hard, hurting growth and risk sentiment. As the noise in the data starts to abate, the likelihood of these risks materializing will begin to crystallize. But we are not there yet, and this seems to be what the bond market is currently saying.