The rebound in consumer confidence is just one more indication that the usual narrative from high unemployment fails. To be sure, the confidence levels from the summer still project a loss for Trump (as it would for any incumbent party holding the White House), but this is a very different recession by virtue of the narrowness of its impact. We get the update on Friday, but employment levels through August are down about 5% from January but down 25% for workers in Leisure & Hospitality, also the lowest paid sector in terms of average hourly earnings. The bottom 20th percentile of income is only responsible for 9% of total consumer expenditure. As I have been writing, for most the virus has meant a change in lifestyle not life. 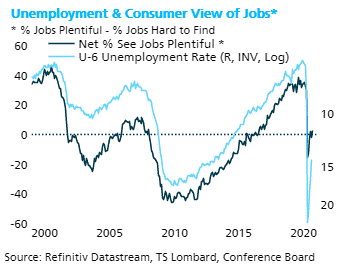 The equity market plays an outsized role in the US, most hold equities directly or indirectly through pension plans such as a 401K, but more so because the market reflects and, at times, leads expectations of consumers and business. The jump in forward expectations in September appears to have been spurred, in part at least, by sustained equity market growth, on a three-month basis.

We see how this connection between confidence and equities played out similarly in the 2007-10 period. 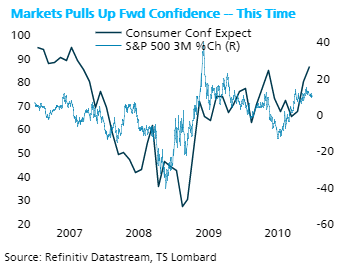 The forward view is not all roses, however, although the worst of the impact of the recessions looks to have passed – and that is usually more important at this stage of the cycle than the level of sentiment.

While the burden of this downturn has fallen disproportionately on the lowest-paid lowest-skilled worker, it is interesting that when it comes to confidence, the income spread matters not at all. The narrow difference illustrated in the chart below is, in fact, more typical of the economy beginning its recovery phase – as it shows higher income collapsing more than the lower income co-hort. Note too that for both income groups, sentiment levels never dropped to as low as they were in 2008-09. 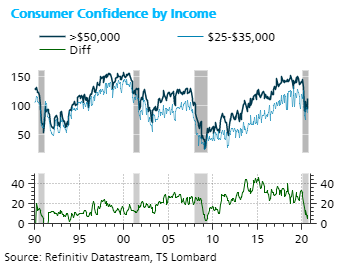 In sum, sustained and certainly marginally improved forward confidence belies the broad economic data and underscores the recession’s narrow impact. This is, after all, a decline created by mandated shutdowns to avoid spread of the virus. The confidence data also convey that the fiscal response consumers want is necessary – income support for people and business who cannot work or operate because of mandated constraints on social interaction. Not surprising, the reopening rebound in employment and markets made the impact of the loss of the $600 de minimis for whole economy. Nevertheless, the loss of broad funding (39 weeks of unemployment insurance starts to run out in Q1, for example) for those sectors of the economy that have been mandated to close or reduce operations will eventually hurt markets, confidence, and ultimately growth. High confidence today reflects reopened activity but also policy’s success in ring-fencing the impact from the loss of activity, this is not the moment to open the gates.