The Equity Market is now in charge

Biden won, Trump lost, but lots of Republicans also won, and the October employment data help explain why – the population does not see the economy in crisis. The ongoing recovery in the labour market (906,000 private sector jobs in October) resonates, and it is why Trump’s argument for work versus fear of COVID won out even as Covid is raging through the middle of the country. Republican successes in the election are not lost on their leadership. Senate Majority Leader McConnell has already proclaimed his role to keep far-left Democrats from taking over the Biden Administration, including Cabinet choices, big spending plans, and healthcare. Expect a Covid-rescue package of some size ($500bn to $1trn), likely before year’s end, but strong jobs data are pushing back on its perceived need, including from McConnell.

Government policy is stuck in a reactive rather than proactive mode until the mid-terms and this is not ideal for equities. The old saw that markets like divided government because it leaves everyone in checkmate, a “do no harm” mode for the economy, is fair when things are going well, but fool’s gold when they are not. The Fed is stuck with a reactive position because there are no more rate cuts to be had, leaving them to manage the size and maturity of their balance sheet in case equity markets crumble. We expect the current rebound to top out soon enough, barring a vaccine, because the level of activity is ultimately squelched by what the virus has impaired – and the impact is worse without a Covid-relief package. 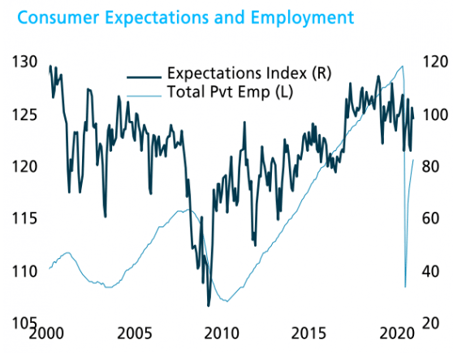 Any proactive long-run government response will be tough to enact with Republicans back at being deficit hawks whenever the president is a Democrat. Long-term fiscal stalemate through the 2009-20 recovery helped contribute to a lopsided expansion that Trump worked to address and is the source of much division in the country. And do not expect MMT to come to the rescue by supporting a large-scale infrastructure program. Powell’s answer in his press conference was to the point – “. . . if the idea is money-financed fiscal policy, that’s not something that we would consider . . . We have different jobs. That separation between those jobs is absolutely critical in our system of government. The job of taxation and spending goes to people who have stood for election and been elected, and that’s the way it should be. They have to be responsible to the electorate. We have a specific job to do with a specific set of tools to support maximum employment, stable prices, financial stability, help the payment system, supervise banks, all the things we’re assigned to do, but we’re not going to get into financing the government.”

How does Biden manage? Biden is obviously smart about the Senate, has a lot of friends there (unlike Obama), and his speech on Saturday night went a ways in building that base by declaring the end of demonization of the other side, coming from the left and from the right. He understands the compromises needed to get legislation passed, and he is also a one-term president. McConnell stonewalled Obama, in part, because he saw how Democrats cooperated with G.W. Bush and that helped him get re-elected. There is no such risk here, he also knows healthcare will be a prime issue and why the Republicans lost seats in 2018. Cooperation is consequently likely to better than it was with Obama, but far from what it would be if the Senate was Democratic. Biden, like Trump and Obama, will use executive orders to advance his “green agenda” and reverse what Trump did on the environment, to re-enter the Paris Accord, WHO, and end the ban on people coming in from certain countries. Also expect legal challenges against government by executive order, and against the power of government agencies to dictate policies that have not been legislated. This is the next great legal battleground to be fought.

With the famed bond vigilantes pinned to the floor by low yields, equity markets now rule the policy roost. If they collapse, policy will respond. This is no way to manage an economy, but this is what divided government creates as a policy response – and equities lose long term in this policy environment, at this time.