Markets normally react negatively to geopolitical risks but soon lose interest. The North Korea crisis of 2017-18 is a prime example of this: since it’s impossible to put a price on a nuclear war, markets simply decided to ignore the risk.

This time, however, is different. Russia’s aggression of Ukraine overnight is enough to elicit a much more vigorous package of sanctions from the West than what has already been announced. Unlike the existing ones, harsher sanctions will likely have a meaningful economic impact.

The other transmission channel from the Russia-Ukraine geopolitical crisis to the real economy is higher commodity prices. The world economy already has an inflation problem that has triggered a forceful central bank response: a war in Ukraine is only going to make matters worse.

Energy prices have reacted to the news as one would expect – moving sharply higher. The chart below shows natural gas prices in the US and the UK. 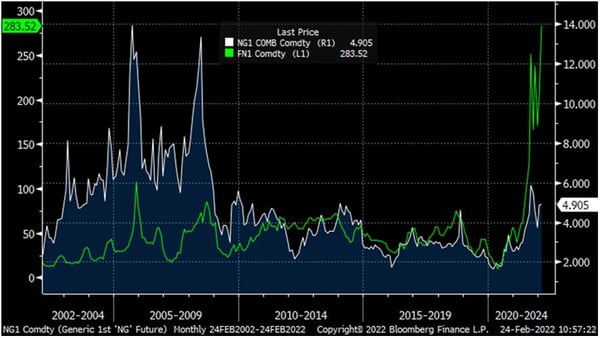 More important than today’s move is what energy prices will be in a few months’ time. The prospect of a protracted confrontation between Russia and Ukraine/the West suggests that they may remain at elevated levels for a long period of time.

Higher energy prices in themselves are not necessarily a disaster for growth and the stock market. The chart below shows a precedent. During the early 2010s we had $100+ oil and that had a limited impact on S&P 500 earnings, if any. EPS continued to rise during that period and the stock market rallied (in fact, it was the oil collapse of 2014-15 that triggered a mini-earnings recession and a flat equity market). 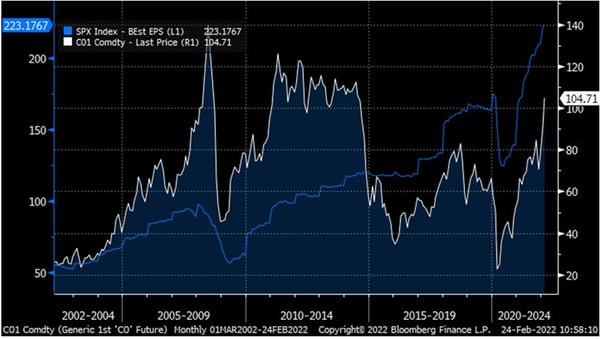 But the parallel with the early 2010s is far from perfect, however. First, the global economy was still in the early stages of a recovery from the Global Financial Crisis: the cycle was not as long in the tooth as it is now. Also, neither the US nor the rest of the world had an inflation problem – quite the opposite, in fact. Core PCE was below 2% for the entire period and global central banks were at 0% rates. Most still are now, but that could soon change because inflation now, unlike then, is massively above target (chart below).

Also, the US and European situations are very different from one another this time. The US economy is likely to be less affected by the Ukraine crisis. As we showed above, European gas prices are already much higher than the US and likely to remain so. And Europe, unlike the US, is a as dependent on energy imports as it was in the 1970s.

The US shale industry has so far lagged in its supply response to higher oil prices, having learned the lessons from the 2010s when it flooded the market, eventually causing the collapse in oil prices. But it could ramp up production more aggressively if a protracted crisis in Ukraine were to push oil prices further up – or keep them too high for too long. This would likely result in a wider spread between Brent and WTI, again aggravating inflationary pressures in Europe more than the US. 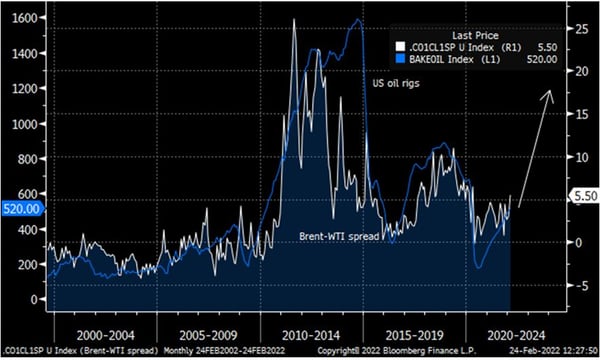 Because of these US-EA differences, the market has taken the view that, as the Ukraine-Russia crisis intensifies, the chances of the ECB keeping a hawkish stance are getting thinner. Short-term USD rates, on the other hand, indicate that investors believe that the Fed will carry on with its tightening plans (chart below).

This may well happen, but even the Fed’s tightening plan may be derailed by continued weakness in the equity market. The Nasdaq is already in a bear market as we write, while the S&P is down nearly 14%. Should this continue, the Fed put may well be triggered.

The Fed has been punched in the face by inflation and as the Fed applies AIT, the dollar smirk has become a smile again. AIT should work from both sides – if US inflation continues to overshoot, in theory there should be a period where the Fed runs the economy cool to get the average rate down. 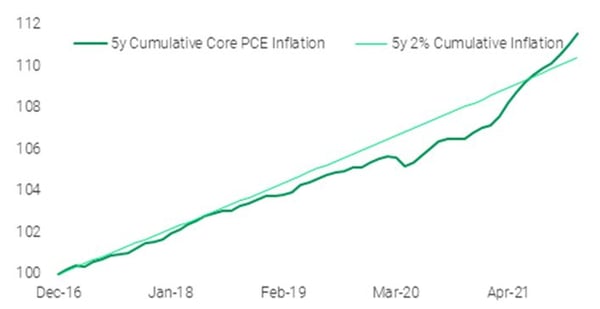 A protracted gas/electricity crisis propelled by tensions between Russia and Ukraine increases the threat to the Fed from inflation; the US 2y breakeven has rapidly risen to 4.2% in the last two days. At the same time, the US is energy-independent, meaning there isn’t a huge growth impact, and if anything, higher prices spur capex as US shale comes back. We are heading to the right-hand side of the dollar smile.

The longer commodity prices stay elevated, the more US growth outperforms its DXY commodity-importing counterparts. Europe and thus the euro are most notably negatively impacted. While surging oil prices amid a weak euro, causing import prices to rise further, would be a recipe for a consumption recession. As the ECB reacts to the negative growth shock, possibly delaying policy normalization, rate differentials would widen to the further detriment of the currency. And a weakening currency would cause further inflation, in a self-reinforcing cycle.

A widening growth and inflation differential between the US and the euro area, coupled with a diverging central banks response, is likely to keep downward pressure on the EUR which, despite doing better than expected compared to the US from an economic standpoint since November, had failed to appreciate.

Elsewhere in G10 FX, there would be a stark divergence between the commodity importing and exporting countries. The dollar and commodity currencies can go up in tandem if risk-off doesn’t dominate markets. This infers that NOK, AUD and CAD should appreciate, while EUR, JPY, CHF and GBP will be vulnerable. In this situation, dollar appreciation also doesn’t hurt commodity exporting EM as long as the appreciation isn’t too rapid. The risk of course then is: general risk -off continues, and the dollar as well as other safe haven currencies would rapidly appreciate in line with the last day of price action to the detriment of all high beta currencies (i.e. the left hand side of the dollar smile). 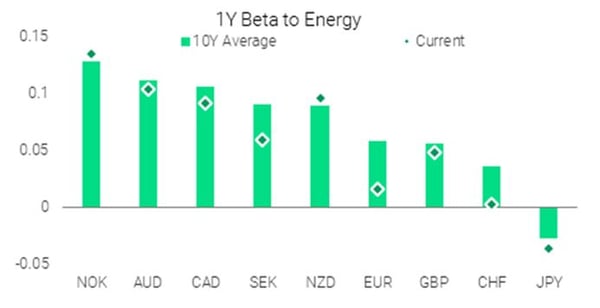 Where does this leave our market view? It is too early to draw definite conclusions as the situation is evolving by the hour, but in light of recent developments we can argue that the risk of a stagflationary environment emerging has notably increased.

As the chart below shows, a NY Fed model suggests that the recent increase in oil prices can be entirely attributed to supply-side reasons. 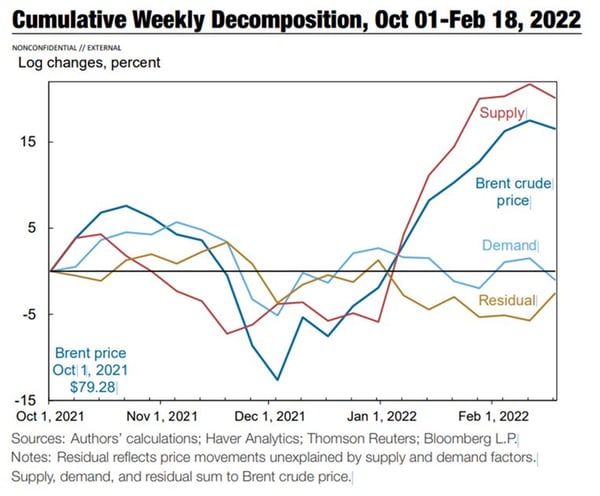 This is important: as long as energy prices (and inflation) rise because of growing demand, the kind of inflation that results is pro-cyclical and it is typically benign. We had this type of ‘demand-pull’ inflation in recent decades, and that made for a favourable environment for equities. The chart below shows that stocks have a positive beta to pro-cyclical inflation and are therefore a perfectly adequate hedge against it. 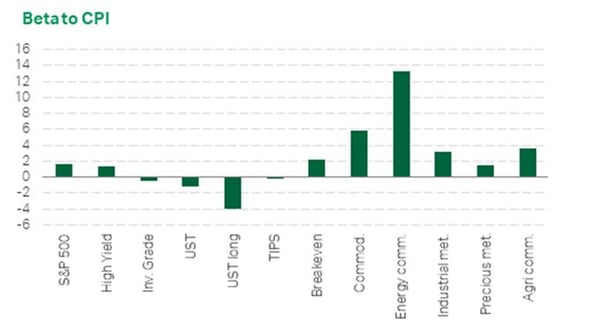 The counter-cyclical inflation of the 1970s was a different story entirely. Back then equities had a negative beta to inflation, as did virtually all asset classes except gold. If that is the direction we are heading, precious metals would be the only place to hide for investors. 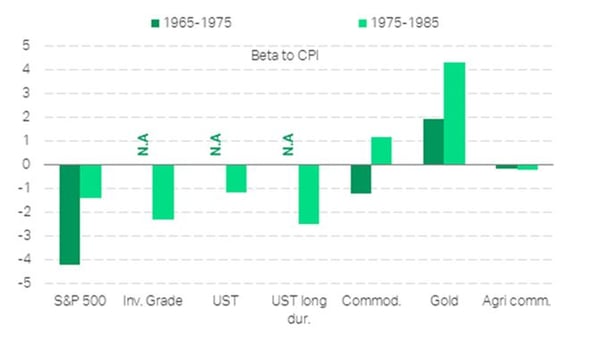 This remains a tail risk for now but certainly it doesn’t seem as far-fetched as it was only a couple of months ago, when inflation was mostly the result of a spike in goods demand and temporary supply chain disruptions.

In our latest Asset Allocation report we had decided to reduce risk overall while tilting our equity exposure towards emerging markets – with a preference for commodity exporters. That view was based on the assumption that a full-scale invasion was unlikely to happen. That assumption proved to be too optimistic but we still think that the direction of travel of our asset allocation was the right one.

While we await for the “fog of war” to dissipate somewhat, we remain of the view that dollar strength is likely to be selective (against EUR, commodity importers and high-beta currencies), making the case for our EM tilt still compelling. Our reduction in credit exposure is consistent with the recent developments and the decision to add to cash and reduce risk overall was a good one – even though we would have gone further had we foreseen an invasion.

The big question now is what to do about government bonds. Inflationary pressures have, if anything, intensified. This suggests that bond yields, looking beyond the initial decline in response to risk-off, will remain under upward pressure. We stay underweight even after the February 24th developments.

Of course if inflation were to remain high enough for long enough, affecting growth to the point of causing a severe slowdown or even a recession, then we would add even more to gold and reduce equities to an underweight. We are not yet convinced this has now become the central case, but the fact that its probability is rising will probably warrant further de-risking ahead.