US recession is over - Backwards won't be the way forward

The “non-Covid” recession ended late summer, timed, in part, by the November peak for the number of unemployed not on temporary layoff. What we call the non-Covid recession is simply the downturn that created job losses other than the temporary ones from forced shutdowns – temporary accounted for, by far, biggest number of unemployed in this cycle. The metrics of this underlying recession are not evident in the headlines but do reflect a typical US recession cycle. It was, in its severity, somewhere between the 90-91 and 2001 recessions. This year, the recovery tied to reopening should hire back most of the temporarily unemployed and dominate the macro data – such as leading to a 5% unemployment rate by year’s end. This is not the trajectory of the recovery to come.

Expansion is where the story gets interesting. Permanent job losses typically peak a few months after recession ends (see chart below), and apparently did so this time, but it takes a very long time for these losses to be fully recouped (they never did during the 2002-07 expansion). An expected repetition of this long tail for job recovery is why the Fed anticipates a long period before raising policy rates. The Fed has no choice but to take this position, any other works against their objective of keeping financial conditions easy, but everyone else does have a choice. Fact is, each US expansion is different from the one before, the drivers of the new upturn are never apparent at the start. Accepting that the coming upturn will, as always, differ from the expansion that just ended requires, at this point, more faith than reason. There is, however, reason to have faith, starting with the under-leveraged household and corporate sector being able to finance a reorienting of place, for living and production. 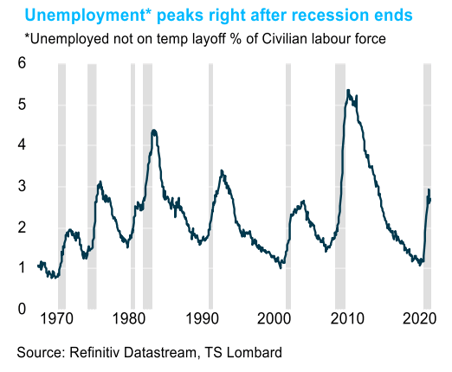 Between household and business investment, business investment will be the more critical determinant of what is to come. Housing is important, and it was conspicuously absent in the last expansion – a function of overbuilding, an aging population, millennials late to the gate to begin homeownership, and tougher underwriting standards. Covid has set off millennials into homeownership and this trend still has a way to go (see chart lower left). Housing’s importance is rooted in it being a domestic-based industry. Autos used to have a similar role, but its multiplier has shrunk as it has become a more global industry. Therein lies the importance of redirecting business investment back into the US (see chart below right). Covid seems to have shifted investment flows, aided in part by the Trump/Republican tax cuts and the Fed no longer underpinning a strong dollar, but more is needed to encourage this redirection.

Government policy, not just deficits, are key and they must lead with building a good economy - a fair economy follows, the reverse is not true. The notion fiscal spending alone is needed to drive the expansion because it was absent from the prior one misreads the reasons for shifts in private sector capital spending across cycles. Trump can be thanked for gaining acceptance for a populist tilt to fiscal policy in recession, but there is no clear evidence that it will be accepted on a pro-cyclical basis. We will see what Biden comes up with - spending more while blocking up capital flows with higher taxes might appear fair, but it will not create the needed good economy last seen in full during the Go-Go 60s.

Other than Covid, the Fed is the biggest risk to the upturn. It must unwind a distortionary policy that holds real rates artificially low and bank assets hostage. To do this, the Fed must manage the size of its balance sheet and hope the rate impact comes out right – a daunting task, to say the least. There are many problems with this stance, but inflation is not one. From the 60s into the early 70s, the Fed held an increasing portion of UST while reserves were falling as a percent of bank assets (see chart below). Inflation must be financed - what that mix supported just when fundamental inflationary pressures were building. Today, the Fed finances its purchases of UST with bank assets, tinder for asset price inflation, not measured prices. To let reserves loose means raising real rates that tax growth. The Fed is the biggest risk.

"Covid aside, Fed unwinding its distortions is the big risk, not inflation"