Politics of unemployment to reign

As the economy reopens, the revealed recessionary environment will reflect the imbalance of the expansion just ended – a surplus of service-related workers with no obvious direction in which to go to find re-employment. We consequently expect the economy to be in a slow grinding recovery even 18 months from now, weighed by the overhang of excess labour, moving along a trajectory greatly dependent upon the fiscal responses enacted both this summer and next. The fiscal packages will be political choices first and foremost – either to bolster the low-skill low-wage service sector employees whose jobs were lost in the shutdown,or the mid-skill mid-wage workers who have been underemployed throughout the expansion. 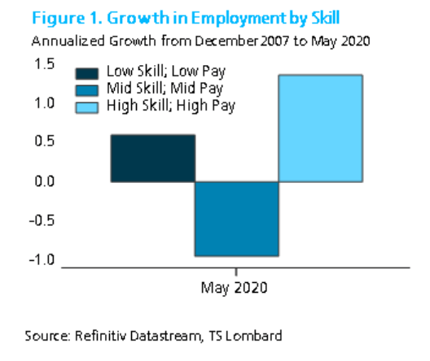 The coming recovery will also be uniquely shaped by the Federal Reserve. In the prior expansion, the Fed grew reserves faster than deposits and the resulting asset inflation created excess consumption of leisure, the centre of job growth, but not the hoped-for leveraged spending on capital goods (where job growth was absent). Low interest rates during the expansion signalled low returns on capital, and households and business reacted accordingly –more saving, less capex. Inflated asset values do not change that calculation. During the current mandated collapse, the Fed’s footprint on the capital markets has expanded further. It is now complete enough that barring a significant external shock, one that rethinks earnings (as has happened with Covid-19). Risk pricing in credit markets will be market-determined to the extent the Fed deems it acceptable. The resulting mis-allocation of capital, a problem for the past 10 years, looms even larger now. The Fed has also entered into new territory by direct lending through its Main St lending program, in coordination with Treasury (the source of capital for its loans). If the program ends up well utilised (still to be determined), the Fed will be creating deposits from reserves spent in the real economy – on wages, rent, inventory, and the like.

Left to its own devices, the coming recovery would employ more mid-skill, mid-wage workers than low-skill, low-wage labour. This conclusion takes account the prior expansion’s excesses and deficiencies and tacks on our sense of the lasting impact of the virus on consumer behaviour and capital investment. This mix-shift in employment means more jobs with a higher average hourly wage. This is the opposite of the 2009-20 expansion, where rapidly expanding low-wage employment suppressed overall wage growth. We saw the impact of this in April when a record 21 million jobs were lost and average hourly earnings jumped 4.7%. Whether this coming boost to overall wage growth ultimately delivers inflation above 2% is not immediately obvious, nor is a conclusion immediately necessary – or important. It will be years before the demand for goods and labour begin to strain supply, and much else can happen between now and then. The inflation question can wait for an answer.

The strong countervailing disinflationary forces of slowing population growth and technology displacing labour, now at an accelerated pace, is an ever increasing challenge for the economy and, by extension, policymakers. Expectations of still lower trend growth and the absence of demand for capital relative to saving are evident from 30-year TIPS yields trading negative. The short-term policy need is to boost demand, rather than a supply side policy tack. The Main St lending program is a step in that direction from the monetary side. Policies to incentivize re-shoring of activity will/would-be another. A massive infrastructure program with domestic content rules would be the biggest step, but the political centre to support such a program is not yet there. If the election moves the centre accordingly, regardless of which party wins, the 18-24 month outlook for the US economy turns much more favourable. If policies focus instead on more supply side measures (income support with a conservative name), the just ended expansion would be recreated – a policy failure by any measure.